1916 is a three-part documentary giving a comprehensive overview of the Easter Rising, looking at the impact it had both here and around the world and the crucial role played by Irish America in the lead up to the rebellion. Pics: RTE 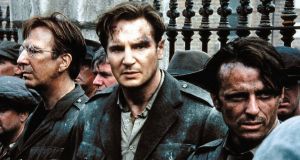 Today, the 20th anniversary of Neil Jordan’s film Michael Collins is being marked with a special screening as part of the Dublin Film Festival. Jordan’s blockbuster created a stir in Ireland in 1996 as Liam Neeson brought Collins vividly to life. Jordan has suggested the film’s content and impact amounted to “a study of violence as a substitute for politics, and the failure of that ultimately”.

Alongside the director’s view, Michael Collins raised other questions relevant to historical films: how rigorous are they in sticking to fact? To what extent will they provide a younger audience with its only exposure to historical events and personalities? How do the political currents flowing during the film’s production affect the filmmakers? In the case of Jordan’s film, the contemporary currents included the faltering peace process and controversies over IRA decommissioning.

The American historian, Robert Rosenstone, has suggested the experimental history film, “rather than opening a window directly on to the past, opens a window on to a different way of thinking about the past. The aim is not to tell everything, but to point to past events, or to converse about history, or to show how history should be meaningful to people in the present.”

Doing that successfully is a tall order and the challenges of bringing history to screen are manifold. As the late Alan Rickman, who portrayed Éamon de Valera in Michael Collins recalled, “It’s the sort of story that would need about 12 hours to tell properly.”

These challenges are relevant to how 1916 is being dramatised, broadcast and screened this year for the Rising’s centenary. RTÉ’s recent series Rebellion was disappointing and left an obvious question: was the 1916 Rising not dramatic enough without having to take such liberties with history? Writer and playwright Gerry Stembridge is surely correct in maintaining that with rigorous characterisation and plotting, “it is not impossible to fashion a drama that is both historically accurate and entertaining and create a sense of what it was like to be there”.

Rebellion failed that challenge; it indicated a keenness to respond to inclusive narratives of the Rising by relating experiences of women and civilians, but its approach was so contrived it lacked the very drama it was supposed to showcase.

The irony is that for all the talk of “landmark” new productions, it is the older ones that remind us how well historical drama can work, including Strumpet City in 1980, but well before that, Hugh Leonard’s Insurrection which really should be shown again, as it has not been broadcast on television since 1966. Given how innovative and gripping it was at the time, it would be worth assessing how well it has weathered.

The same is true of some of the older historical documentaries suffused with the power of personal testimony and contemporary writings that current reconstructions, reinventions and fiction struggle to match. There was impressive work done in RTÉ in the 1960s and 1970s with such programmes as Aindreas Ó Gallchóir’s Seven Signatories and the only documentary on the Rising in Galway, with a moving interview with the last survivor of that short campaign, directed by Eoghan Harris for the current affairs series Féach in the late 1960s. If these have been preserved, they should be rebroadcast.

Twenty years on from 1996, Liam Neeson is back with something new, with a “Voice of God” narration of Bríona Nic Dhiarmada’s 1916, which many will regard as satisfyingly old-style. But it would be worth remembering and rebroadcasting the efforts of those around at the time of the 50th anniversary of the Rising.

I recall a commissioning editor in RTÉ telling me what was required in history documentaries were “broadsheet thoughts in tabloid headlines”, but that, to my mind, underestimates the audience. To its credit, RTÉ has responded to the challenge of a complicated centenary narrative by broadcasting new documentaries, most recently Catriona Crowe’s brilliant excavation of social history in Life Before the Rising.

I have to declare an interest as an interviewee in some of the recent documentaries. A recent correspondent, who did not like one of the documentaries, harangued me for what he regarded as its objectionable tone. I had to remind him that interviewees answer the questions they are asked and nothing else; they do not see the finished product before it is broadcast and have no editorial input.

The same is true of film. Alan Rickman recalled of his role as de Valera: “I spent a lot of time and energy fighting his corner . . . But I can’t answer for what the director or the studio do. In the script, there was a very important moment – which was cut –which made it clear that he was not involved in the death of Collins. But other forces wanted the film to end on a romantic notion”.

Public transport and the roadmap
The National Maternity Hospital
The Occupied Territories Bill
English exceptionalism?
Post-pandemic innovation opportunities
Access to the countryside
The long and the shorts of it
Leaving Cert documentation
Appreciating our public parks
Trump and Twitter