Diarmaid Ferriter: Ireland has bowed to US firms since 1950s

Donald Trump on his arrival at Shannon Airport to visit his golf course in Doonbeg, Co. Clare in 2014. He he is due to visit Ireland later this month. Video: Ballywire 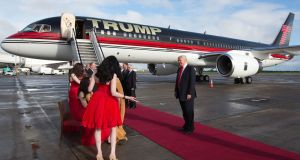 US Republican presidential candidate Donald Trump stands on a red carpet in Shannon Airport during a visit in 2014. Photograph: Sean Curtin.

Both Donald Trump and Minister for Finance Michael Noonan have been talking potatoes recently. The two go back some way, most memorably when, excruciatingly, Noonan ensured the red carpet and Irish jig treatment for Trump at Shannon Airport in May 2014, while Trump was en route to his Doonbeg golf resort.

As was reported in this newspaper at the time, there was much “bowing and scraping” going on.

I don’t know whether Noonan was upset about Trump’s dismissal of his Doonbeg investment earlier this year as “like small potatoes… I’ll let my kids run it, have fun with it, let my executives have a good time, but I don’t care about it”.

But Noonan does, of course, care passionately about rejecting the European Commission’s ruling on Apple – he said for Ireland to accept the €13 billion would be akin to “eating the seed potatoes”.

Wealthy US investors have been having fun with Ireland for decades and Irish politicians have been adamant that such profitable frolics are fundamental to Ireland’s wellbeing, so much so, that to demand or accept a meaningful tax take from their operations would be a spectacular act of national sabotage and almost bring us back to the Irish potato famine.

Historically, Ministers for Finance and Revenue were not keen on tax relief for foreign companies in Ireland; the Department of Finance opposed the introduction of Exports Profits Tax Relief in 1956, by the second inter-party government, with a zero rate of tax on income from export sales of manufacturing goods.

In 1950, the government’s Dollar Exports Advisory Committee recommended a tax concession on all profits earned by exports, but Revenue argued, “the relief would be more or less in the nature of a gift”.

It might be tempting to applaud the foresight of Fianna Fáil’s Erskine Childers in 1956 in questioning the ethics of Ireland’s new low corporation tax regime: “certain types of capital investments here are likely to be of a fugitive character”.

‘Propaganda of the IDA

Barry’s work underlines the inadequacy of the conventional focus on Whitaker and Lemass as the only two architects of economic reorientation, as it ignores “the co-evolution of economic thinking in the major political parties”.

Consensus amongst the main political parties and State agencies was the hallmark of the approach thereafter; historian Joe Lee has observed in relation to the growth of electronics and chemicals, the “propaganda barrage of the Industrial Development Authority”, established in 1949, was relentless, and it criticised “destructive comment based on lack of information”, even though it only began to assemble proper data regarding the gains to the Irish economy in the late 1970s.

But much ambiguity remained and, up to recent times, there has been an absence of hard fact. In 2010, Keith Walsh, from the Research and Analytics Branch of the Revenue Commissioners, presented “for the first time, data on the fiscal impact of US companies in Ireland” and while he concluded that “US companies are significant sources of tax revenue” he still asserted that “despite the importance of US investment in Ireland, it is difficult to measure the size of the contribution of US multinational companies accurately”.

He only referred to “the perception that multinational companies from the US are abusing transfer pricing rules to shift excessive profits into their Irish affiliates to take advantage of Ireland’s low corporation tax”.

The EU’s ruling, of course, has blown the ambiguities away with a gale force and exposes a hollowness in the bombastic circular issued by the Department of Finance in 2011, Ireland’s Corporation Strategy, with “The 3 Rs: Rate, Regime, Reputation.”

Soundbite of the week

In October 2013, Noonan solemnly announced a regained Irish sovereignty because Ireland, in exiting the bailout programme, “will have been handed back her purse”.

Now that Ireland has been given a real opportunity to take back its purse, Noonan does not want it.

And what of this summary?

“When Enda Kenny meets Chancellor Angela Merkel, he merely genuflects. When Michael Noonan meets Christine Lagarde of the IMF, he prostrates himself. And when Richard Bruton meets a multinational boss or its IDA promoters, he salivates savagely. So many ministers are in such awe of so many of our foreign benefactors that we sometimes tend to forget that we are a sovereign nation”.

Such were the insights of Shane Ross last year.

But propaganda soundbite of the week must go to Apple’s chief executive Tim Cook, who insists that for Apple, its operations here “are all about the people”.

1 Dr Tony Holohan expected to return to his post next week
2 How one couple’s weekend away resulted in 30 Covid-19 cases
3 Woulfe resignation would be unjust and disproportionate, Denham report concludes
4 Will your boss let you work long-term from home – or from abroad?
5 Nphet meets but no change to current alert levels expected this week
Real news has value SUBSCRIBE