Diarmaid Ferriter: Can my wife trust her Fitbit?

I wonder where all this data goes. What is done with it and by whom? 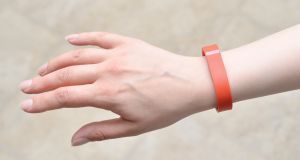 ‘It is a reliable and steady companion. It encourages and reinforces positive behaviour and it only needs to be recharged every few days. It tells her how fabulous she is with great regularity and gusto.’

My wife has a new obsession that fits snugly around her wrist. I had no idea when I bought it that it would not only replace me, but also be a hell of a lot more satisfying.

This device, a Fitbit, looks like a slim watch, but telling the time seems to be the least interesting thing it does.

It tells her how many steps she has taken at any given point in the day and what her heart rate is; she even wears it at night, and in the morning it tells her all sorts of things about her nocturnal contentment or otherwise – the extent of tossing and turning or the periods of restfulness.

When you are on the move it will tell you if you are in the “fat burn”, “peak” or “cardio” zones and there is an altimeter for tracking the number of stairs climbed.

If it appears to be a strict manager, it compensates by sending encouragement and congratulations when the wearer has reached certain milestones: 10,000 steps taken, for example, heralds the Fitbit’s equivalent of a trumpet sound and slap on the back, which involves dreadful ruination of language, as it uses words such as “splendiferous!”

A few weeks ago it trumpeted “ Mahalo! You’ve earned the Hawaii badge: You’ve walked your way to 563 lifetime kilometres – the same length as the Hawaii archipelago, including all eight major islands! An achievement like that really puts the wow in Luau!”

This cheesy gibberish was only a taster, however; more recently, new heights were reached as the steps accumulated: “You’ve earned the Serengeti badge. You may not have seen wild beasts, giraffes or zebras on this trek, but you have walked 804 kilometres, the same distance as the Serengeti, one of the seven natural wonders of the world.”

That would be lots more steps, especially if the wearer has given in to temptation, but think of what other wonders of the world badges will be earned after that.

There are plenty of stern reminders on various Fitbit websites – “They require you to hold yourself accountable and dedicate yourself to the hard work needed” being one example – but also an abundance of boasts about the joys of being empowered with so much information on your internal dynamics that it will push you to go the extra mile.

Silicon Valley loves this kind of creation, and why wouldn’t it? Fitbit was founded in San Francisco in 2007 and sold over 21 million devices last year, generating revenues of $1.9 billion.

It is also rumoured to be setting up a European base in Dublin. The mobile health market is expected to grow eightfold in the next 10 years to over $40 billion by 2023.

It encourages and reinforces positive behaviour and it only needs to be recharged every few days. It tells her how fabulous she is with great regularity and gusto.

Husbands cannot manage any of that, failing to measure up to any wonders of the world, natural or otherwise.

But I wonder where all this Fitbit data goes. What is done with it and by whom? And what about companies that use the Fitbit to adjust their employees’ healthcare premiums according to the level of physical activity company-provided Fitbit devices record and monitor?

BP America, for example, bought 24,000 Fitbits to give free to employees, their spouses and retirees in 2013; as a result, the company’s healthcare expenses fell considerably, but surely this is crossing a line, given the sensitive data the company gets access to?

This remote surveillance and monitoring can only get worse. In 2015, at the annual International Consumer Electronics Show in Las Vegas, where the “wearable and fitness” categories now occupy over half the space, Zensorium’s Being was unveiled, a watch-like device that indicates whether the wearer’s mood is distress, excited, normal or calm.

Have we reached the stage where the normal range of human emotions cannot be just felt and experienced, but have to be monitored, processed and categorised through a “mindfulness tracker”?

One company that manufactures a fitness wrist device has a nauseating tagline: “There’s a better version of you out there. Just get up and find it”.

If I was wearing a Being, I’m sure, on reading that tagline, it would record a mood of distress, or maybe it would tell me I am just an embittered husband replaced by much more satisfying technology.