Dismissals of claims that Brexit could damage peace process are worrying 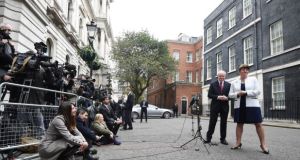 The convening during the week of the all-island civic forum and recent talk of the possibility of the reintroduction of a “hard border” in the aftermath of Brexit reminded me of the observations of the Kilkenny writer Hubert Butler.

In his book Grandmother and Wolf Tone, published in 1990, the year before he died, Butler suggested that, in time, the Border “might become meaningless and drop off painlessly like a strip of plaster from a wound that had healed, or else survive in some modified form as a definition which distinguishes but does not divide”.

In recent years, the extent to which the Border has been described as “soft” or “invisible” seemed to be a vindication of Butler’s comments, but the Brexit referendum result has called them into question.

The unanimity surrounding the chorus “no return to a hard border” articulated in the last few months appears superficial.

Outside Downing Street a few weeks ago, Martin McGuinness and Arlene Foster shared the “no hard border” script as they nodded sagely to each other – a rare occurrence – despite the fact that their parties took different sides in the Brexit referendum.

But last week, a High Court judge in Belfast seemed more equivocal; in rejecting a legal challenge to the outcome of the Brexit referendum, he asserted it “remains to be seen” the impact it will have on the Border.

It also remains to be seen what impact it will have on the 1998 Belfast Agreement, which includes the assertions that “it would be wrong to make any change in the status of Northern Ireland save with the consent of a majority of its people”.

And that recognition will be given to the right “of all the people of Northern Ireland to identify themselves and be accepted as Irish or British, or both, as they may so choose, and accordingly confirm that their right to hold both British and Irish citizenship is accepted by both governments and would not be affected by any future change in the status of Northern Ireland”.

This issue of choice about status was framed in relation to the options of remaining part of the UK or Irish unification but, arguably, it is relevant to the Brexit vote which has raised legitimate concerns about status and citizenship, given that 55.8 per cent of the Northern Ireland electorate voted to remain in the EU, but Northern Ireland will now be taken out of the EU.

Is it the case that, with Northern Ireland outside the EU, those who wish to remain European citizens will be required to claim Irish citizenship, even if they see themselves as British?

In 1998, at the time of the endorsement of the Belfast Agreement, Fintan O’Toole observed that “Northern Ireland is now a place that is arguably unique – a place that nobody claims and nobody owns, a place that is free to become whatever its people can agree that they want it to be”.

The problem now is that such freedom has been denied.

Part of the momentum underpinning the peace process was the acceptance by Britain that Northern Ireland was unique and that special consideration needed to be given to it, in order for it to control its own destiny.

In 1990, Secretary of State for Northern Ireland Peter Brooke announced: “The British Government has no selfish or strategic or economic interest in Northern Ireland: our role is to help, enable and encourage. Britain’s purpose . . . is not to occupy, oppress or exploit but to ensure democratic debate and free democratic choice.”

The chorus from historians and political scientists after the Belfast Agreement referendums in 1998 was that the Northern Ireland question was now about local legitimacy and a new definition of self-determination; in the words of Tom Garvin, the “principle of popular sovereignty is replacing the principle of monarchical sovereignty as the legitimating doctrine of Northern Ireland”.

In light of the Brexit referendum, many of these observations, assertions and declarations seem hollow, and a mantra about retention of the “invisible” Border is hardly an adequate response.

Arlene Foster has been mute about the notion of Northern Ireland having a “special status” in the context of Brexit, and has dismissed the idea that Brexit could damage the peace process as “outrageous commentary”. It is not.

Historian Ian McBride argued that the Belfast Agreement “clearly envisaged that Northern Ireland’s future constitutional arrangements would be worked out in the context of continuing partnership between the north and the south, and between politicians in London and Dublin. To remove Northern Ireland from Europe without its consent is not only morally wrong and politically risky; it is also a rejection of the fundamental bilateralism of the peace process”.

Abandonment of recognition of partnership mixed with self-determination – so tortuously achieved – would be very worrying.

1 One hundred Irish retailers for all your online Christmas shopping
2 Life under Level 5: Where can I go, who can I see, what is closed and what is open?
3 Thousands of gardaí mount checkpoints and patrol parks, beauty spots
4 Covid-19: Pressure over breakdown in tracing system intensifies as State enters Level 5
5 Developer’s impeccably restored Fitzwilliam Square Georgian for €3.5m
Real news has value SUBSCRIBE