“Trump voters are a coalition of the dispossessed. The American system is not working for them” 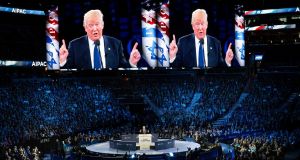 On a visit to the US last week, the coverage of the presidential primaries was unavoidable as the various networks and newspapers immersed themselves deeply in the task of dissecting the onward march of Donald Trump and the contest for the Democratic Party nomination between Bernie Sanders and Hillary Clinton.

In reacting to the ugliness of the Trump machine, he expressed distress about the implications of a campaign so clearly intended to divide: the hate-filled rhetoric, racism and misogyny of Trump’s outpourings are doing wonders for Trump’s campaign, he observed, but “is it good for America?”

The New York Times has characterised Trump’s campaign as “vile”, while from Arlington in Boston, a woman who was critical of Trump’s ambiguity in responding to questions about the Ku Klux Klan, wrote to the Boston Globe to reveal her criticism resulted in her receiving an envelope in the post containing a photocopy of the Ku Klux Klan emblem: “These are indeed dangerous times …we live in the bubble of a Democratic state, so our vote here for whoever is Trump’s opponent will prevail in Massachusetts.

“Yet if Trump becomes president, I will think about returning to Austria, where for the time being Nazism is officially forbidden. Getting a KKK emblem anonymously in the mail is equivalent to getting a swastika. Been there, lived through it. Don’t have to do it again”.

Meanwhile, in the Wall Street Journal, Peggy Noonan wondered if the Republican Party will break apart or evolve to adapt to the new political landscape; everything about the party, she maintains, “had to fail for Mr Trump to rise”.

But the key question, she suggested, is whether Trump really knows the difference between politics and posturing, underlined by his blithe response to the question about what might happen if the party moved to deny him nomination at the convention: “I think you’d have riots.”

This recklessness in speaking about violence- and indeed race and gender- suggests, Noonan decided, a basic ignorance about the “deep and particular responsibilities” of political leadership.

There was also much coverage of the historic visit of President Obama to Cuba in the ongoing efforts to heal the historic rift between the two countries; in the midst of the ugly presidential campaign and a petulant partisanship that sees too many of his efforts stymied by the US Congress, the dignity of Obama shines; a president that can use his words and gestures to emphasise unity, compromise and attempts to heal rather than crassly pitting Americans against each other.

Dignity and restraint are urgent needs in international politics now, especially because of the kind of carnage that was witnessed in Brussels this week; heaping abuse on Muslims can only exacerbate a volatility that is proving more and more deadly.

Those covering American politics also have to try and understand Trump’s appeal.

Undoubtedly, the assessment of New York Times columnist David Brooks that Trump is “epically unprepared to be president, with a vast narcissism and no realistic policies”, and “is perhaps the most dishonest person to run for high office in our lifetimes” is fair comment.

But many journalists have been so intent on waiting for Trump to self-destruct that they have not been doing enough to explain his success, partly because they are not, in Brook’s words, “socially intermingled with his supporters”.

Some respect for those voters, he urges, “is in order. Trump voters are a coalition of the dispossessed.

“ They have suffered lost jobs, lost wages, lost dreams. The American system is not working for them.”

‘Coalition of the dispossessed’

The idea of a “coalition of the dispossessed” can be validly applied to many contemporary and historic groups who demanded change and sometimes wreaked destruction.

The kind of leadership generated by the dispossessed has varied hugely, as have the contexts in which they emerge.

This Easter weekend will see commemoration of the 1916 Rising on a grand scale, a rebellion propelled by another group who saw themselves as a coalition of the dispossessed, or what historian Alvin Jackson described as a “legion of the excluded”; those who felt little if any stake in the established order.

What they did and did not do; what they represented or did not represent is still vigorously debated.

Feelings about them at the time and since are mixed; playwright Seán O’Casey, for example, was highly critical of Patrick Pearse and what he saw as the futility of blood sacrifice in 1916.

But he also acknowledged, “Pearse, while filled with the vision of a romantic Ireland, was also fairly full of an Ireland sensitive, knowledgeable and graceful” - words that will never be applied to Donald Trump.

1 Prof Sam McConkey: This is the beginning of the second Covid-19 wave in Ireland
2 Mike Murphy: ‘I won’t do another over-70s lockdown’
3 The far right rises: Its growth as a political force in Ireland
4 Coronavirus: Public health experts considered idea of moving Dublin to Level 4
5 Fintan O’Toole: It is June 24th, 2025 – and Brexit has worked
Real news has value SUBSCRIBE