Derek Scally: Angela Merkel has gone to war but will Germany follow?

After a decade mastering one type of political leadership - weighing things up and sitting things out - she may have entered her third, and perhaps final, act with two recent, risky decisions 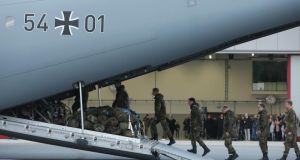 Forty members of the Bundeswehr, the German armed forces, board a Luftwaffe A-400M transport plane destined for Incirlik airbase in Turkey as part of Germany’s participation in the international military intervention against the Islamic State (IS) in Syria on December 10, 2015 in Jagel, Germany. Photo by Sean Gallup/Getty Images

Angela Merkel doesn’t read her reviews. She is too busy and too familiar with the Noel Coward logic that if you believe the good reviews, then you have to believe the bad ones too.

During her decade in power, cover stories on the German leader have generally been more bad than good.

For the New Statesman she was a “Terminator” (Terminatress?) and “Europe’s most dangerous leader”.

Stern dubbed her an “Ice Queen”, while an ambivalent Businessweek christened her “Poker Face”.

Der Spiegel has a tradition of being nasty to everyone on its covers but has produced particularly mean Merkel covers: Angela Cowardly, The German Übermacht (Merkel sharing a joke with black-and-white Nazis) and Trümmerfrau (rubble woman Merkel sitting on Greek ruins).

The tide last month turned when the Economist dubbed her the “Indispensable Europe”. Now Time has followed up by naming her its person of the year.

Though she has little time for these titles, the Time accolade is nicely timed ahead of her Christian Democratic Union (CDU) party conference in Karlsruhe from tomorrow.

Facing unprecedented challenges, grumblings about their leader of 15 years among party rank-and-file have reached new levels.

But, with the 10th anniversary tomorrow of her election as chancellor, Merkel remains unchallenged in Germany.

After a decade mastering one type of political leadership – weighing things up and sitting things out – she may have entered her third, and perhaps final, act with two recent risky decisions.

In August she made a massive “we can do this” humanitarian leap into the unknown on refugees.

Last week, meanwhile, she pushing through her first military intervention.

People are bewildered. Who is this woman running Germany, they ask, and what has she done with Angela Merkel?

Many see in these decisions the first signs of a woman who has been in power too long, out of touch with political realities on the ground. Yet her close aides – a remarkably loyal team after a demanding decade in office – say they still recognise the woman they work for.

On refugees, they dismiss claims Merkel acted in a moment of emotional weakness to set aside EU migration rules and allow Syrians enter Germany unhindered.

They say that uniting her responses to challenging Isis and opening doors to those fleeing them is a rational mind that analyses developments, maps out outcomes and has found no option but to act, and act fast, despite incalculable risks.

On refugees, she has identified the mass movement of people as the first act in a longer exodus of biblical proportions that cannot be resisted. She is convinced that Germany is, alongside Sweden and a handful of others, one of the few European countries living up to its Geneva Convention refugee obligations.

Similarly, she refuses to play as a political football the fundamental right to asylum. The ones who are – by not taking people in, or sitting on their hands – are the ones with the explaining to do, she believes.

But Germany’s refugee welcome of September has chilled in December, and Merkel has had to qualify her actions, trying to buy time until a hoped-for relief comes from Turkey and at so-called refugee hotspots on EU borders.

In an admission that was remarkable for any German leader and staggeringly frank for Merkel, she said recently: “We will just have to drive by sight for a few years.”

A similar logic governs her decision to join the anti-Isis coalition – deploying reconnaissance planes, a warship and 1,200 support soldiers. This is no black or white decision, says Berlin officials. At best a mid- to light-grey move with no guarantee of success.

Despite claims to the contrary, they say this is not Merkel’s first military involvement, pointing to how Berlin has stayed the distance in Afghanistan and joined efforts in Mali.

But the Isis mandate represents a departure from the so-called “Merkel doctrine”, a new take on the old culture of restraint whereby Berlin preferred to offer strategic allies arms, training and other capabilities rather than abandon Germany’s historical aversion to marching off to war after the second World War.

Aiding the fight against Isis is an effort to make good the reputational damage Germany took by refusing to back military action against Libya – even if Berlin thinks it was the correct decision.

Since then Berlin believes it has proved itself diplomatically over Ukraine, preventing a bad situation over Crimea getting worse, if not better, by facing down both the Russian leader and US demands to arm Kiev.

Joining military action against Isis now, Merkel allies say, is about facing down the new quality of threat posed by a “barbaric and fascist” organisation, words not used lightly in German official circles.

It is also about an indispensable Germany holding together Europe and not abandoning France, its most important, yet wounded, partner.

If anything the post-Paris situation repeats the post 9/11 era when the wounded partner was not France but the US. Then chancellor Gerhard Schröder dismissed the looming Iraq war as a “military misadventure” and refused to join.

But Merkel, then in opposition, implicitly backed the war. Whatever its uncertainties and flaws, she said that loyalty to allies has priority.

After a decade in power, a decade of being attacked regularly as an over-cautious pedant, Merkel has quietly buried her anti-interventionist self. She has taken Germany from being a solidarity-driven follower to cautious leader – without knowing if her people will follow.