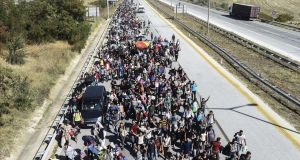 Syrian migrants and refugees on their way through Turkey. In the absence of a safe zone inside Syria, Turkey may be unable to prevent refugees from entering, and subsequently exiting to Europe. Photograph: AFP Photo/Bulent kilic/AFP/Getty Images

Russia’s recent intervention in the Syrian Civil War has further complicated what was already the most complex conflict of this century. It is likely to exacerbate the most critical humanitarian crisis of our times by putting millions of civilians at even greater risk, and make even more difficult the already-daunting challenge of protecting those civilians.

For four and a half years, Syria has provided the battleground for a sectarian proxy war between the most powerful Shia and Sunni states in the region: Iran and Saudi Arabia. It has been the staging ground for the biggest gathering of jihadists since Afghanistan in the 1980s, while global jihad’s two biggest players - al-Qaeda and IS - are battling each other in Syria for domination.

When Russia sent airstrikes onto Syrian targets for the first time on September 30, it became the thirteenth country to do so this year, with France having become the twelfth just three days earlier.

Now, on the plains of Hama and the outskirts of Aleppo, an unprecedented gathering of Assad-supporting armies is taking place - Shia militias drawn from a handful of countries that are not included in the above thirteen: Iran, Iraq, Afghanistan, Lebanon’s Hezbollah, and Yemen’s Houthi, with all of these commanded by Iran and not Syria.

Non-state entities such as IS and al-Qaeda’s Jabhat al-Nusra have attracted foreign fighters from over 100 countries. Added to all that are literally hundreds of home-grown rebel armies ranging from US-supported “moderates” to hardline Islamists backed by the Saudis and Turkey. Assad, too, can call upon localised militias who do not belong to the Syrian Army proper.

Meanwhile, Syrian Kurds have taken control of a large swathe of the north-east, and Druze and Bedouins have begun to stir in the south-west. Every combatant in the field is fighting at least two different enemies.

Thus far, Russian airstrikes have occasionally been more precise than those of the Syrian Air Force, but it seems that accuracy is not the primary concern: hospitals and IDP (Internally Displaced Persons) camps have been hit, and civilians have been killed. Russian airstrikes deploy bombs that are bigger, more powerful, and more destructive than any previously used by Assad.

The cash-strapped Syrian military, which had become increasingly reliant on dropping 300 dollar barrel bombs, can now concentrate on its ground offensives under the close air support of a seemingly cash-unlimited superpower. Added to that, the Russian intervention has introduced an array of advanced weapons previously unseen in Syria: attack helicopters and cluster munitions being the most worrying for civilians on the ground. And of course, cruise missiles deployed from the Caspian Sea.

When we talk about the humanitarian impact of the first four and a half years of this conflict, the numbers are so enormous that it’s easier to round them to the nearest million.

Many of the eight million Syrians who have been internally displaced have relocated from government-controlled areas to opposition-held areas in the north, such as Idleb governorate where GOAL’s works extensively, the rebel-held half of Aleppo city, and that part of northern Aleppo governorate which is not controlled by IS.

Since Russia’s entrance, the Assad-aligned strategy appears to be to win back those three opposition-held zones before tackling the part of the country under IS rule. Faced with such an offensive, the millions of civilians in those zones will have nowhere to go but north to the Turkish border, which has been closed since March.

Turkey’s reasons for locking down the border can be attributed to a combination of compliance with international demands to stem the flow of jihadists and an acceptance that, at two million refugees, it has surpassed its psychological threshold. Latterly, Turkey is under further pressure from the EU to stem the refugee flow into Europe.

Rather than re-open its borders to another two million fleeing Syrians, Turkey currently favours the option of protecting civilians in a Safe Zone in northern Aleppo governorate, an option that would only feasibly work beneath a US-enforced No-Fly Zone.

Russia’s presence in Syrian airspace has complicated that option to a massive degree. A Safe Zone would also need to be protected on the ground by a force which would have to be non-Islamist in order for the US to opt-in, and which Turkey would require to be non-Kurd.

Unfortunately, the Kurds have proven to be the most effective American proxy while Islamist groups, such as Ahrar al-Sham, are Turkey’s.

Clearly, it is the EU’s intention that the next wave of refugees to flee Syria will be accommodated within Turkey’s borders rather than arriving on European shores.

In the absence of a Safe Zone inside Syria, Turkey may be unable to prevent such a refugee wave from entering, and subsequently exiting to Europe.

Protecting those millions of civilians inside Syria, or finding somewhere acceptable for them to go outside of Syria, is the challenge that awaits. The alternative could mean rounding the death toll up to a million.

Derek O’Rourke is Safety & Security Advisor with GOAL Syria, based in Antakya on the Turkish/Syrian border.