Demand for abortion pills highlights need for change in the law

Analysis shows women can decide for themselves the best reproductive choice 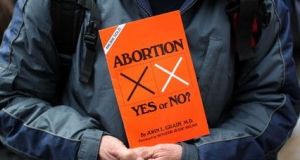 Almost all women in the study shared one common negative experience: the shroud of secrecy behind which they were compelled to keep their abortions. File photograph: Getty Images

Abortion may be illegal in Ireland, but it is far from rare. Each year thousands of Irish women travel from Ireland to England and Wales to access abortion services. An increasing number of women are accessing abortion at home through online telemedicine. In the past six years, more than 5,000 women in Ireland and Northern Ireland have sought at-home abortion. These are often women who cannot afford to travel abroad, who are unable to take time away from work or family, or who cannot risk the journey for fear of being found out.

We are the authors of a recent study that explored the experiences of Irish and Northern Irish women who sought and obtained early medical abortion (up to nine weeks gestation at the time of request) through online telemedicine service Women on Web. Our findings provide a new dimension to the ongoing debate, as well as an indication of the impact a repeal of the constitutional ban on abortion – the Eighth Amendment – could have.

The most striking finding from our examination of at-home medical abortion is the clear benefits women reported for their health, wellbeing and autonomy. Virtually all women – 97 per cent – felt abortion using online telemedicine was the right choice for them and 98 per cent said they would recommend the option to other women in a similar situation.

Most women described a mix of feelings after their abortion. By far the most commonly reported feeling was relief (70 per cent), followed by satisfaction (36 per cent) and happiness (27 per cent). These positive emotions stood in stark contrast to the psychological trauma many anticipated if they had been forced to continue a pregnancy they did not want or felt they could not keep. As one woman explained: “The restriction of abortion in this country can lead to overwhelming distress, depression, despair. In that respect the law is a brutality against women.”

The clear message from our analysis is that women can decide for themselves the best reproductive choice for their own individual situations. Moreover, abortion can be a positive, health-promoting choice.

Yet almost all women in the study shared one common negative experience: the shroud of secrecy behind which they were compelled to keep their abortions. After all, abortion in Ireland is a crime. And with that status comes fear, silence and isolation. Those with fewest financial resources are also the most likely to lack adequate support from friends and family.

It is for precisely this reason that maintaining the status quo on abortion will not resolve the harm Ireland’s current abortion law does to women. Women are hurt by the law not because they cannot obtain abortions, but because they are forced to obtain and conduct them in a climate of isolation, anxiety, and shame. Only a repeal of the Eighth Amendment would finally allow Irish women to have the abortions they are already having, free from government-sanctioned stigma and suffering.

The stories of other Irish women who have been denied travel, who have suffered serious harm, and who have died as a result of Ireland’s restrictive laws have already prompted the United Nations to call on Ireland for abortion reform. But since many of these cases involved a diagnosis of severe or fatal foetal anomaly, some still favour only a narrow foetal anomaly exception to the current law.

Such a small step would be a grave disservice to Irish women. Why? Because there is this important fact: there is no one group of women in Ireland who needs abortion access.

The women who need and who have abortions come from all sectors of Irish society. They are married mothers who feel their families are complete; young women with dreams of completing their education; single mothers working to put food on the table; migrant workers starting new lives; and women who have survived rape and sexual violence.

The ongoing debates that will take place in homes, in the media and in the Dáil itself are critical to the future of reproductive rights and social justice in Ireland. The Irish women who risk financial insecurity, censure by their communities and even a possible jail sentence are courageous far beyond most of our own experiences. But they should not have to risk these things simply to ensure control over their own bodies, the wellbeing of their families and the opportunity for a brighter future. Simply put, it is time to trust women. It is time for abortion reform.