Decent middle England should reassert itself over Brexit 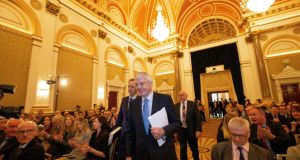 John Major in Dublin this week. The fundamentally decent side of British democracy was represented when the former British prime minister travelled to Longford to deliver the Albert Reynolds memorial lecture and also spoke in Dublin. Photograph: Tom Honan

There is a strange symmetry between the election of the First Dáil 100 years ago this week and the humiliating antics of the House of Commons, “the mother of all parliaments”, before the eyes of an astonished world. The two events, 100 years apart, are intertwined as it is the inability of those British politicians most hostile to the European Union to cope with the challenge posed by the Irish Border that has plunged their country into political chaos.

The principal motivation for Conservative politicians reluctantly conceding to the demand for an independent parliament in Dublin 100 years ago was a desire to get the Irish issue out of British politics once and for all. That it has come back to haunt them once more is the ultimate nightmare for hardline Tories.

One of the miscalculations made by most of the British political class in the Brexit saga was to underestimate the solidarity with Irish concerns by the rest of the EU. There was an expectation in London that EU unity would begin to fracture during the Brexit talks as major states eyed their own interests.

That nothing of the kind happened is partly a tribute to Irish political leaders and officials who mounted a determined diplomatic offence immediately after the Brexit referendum while British political leaders were arguing among themselves and failing to come up with a coherent strategy until the 11th hour.

Of course the solidarity of the EU 27 is not just about Ireland. It was motivated by a desire to demonstrate that the EU would not buckle because one of its prominent members had decided to leave. One of the many ironies of Brexit is that it has brought the union closer together, despite the problems facing some member states.

The solidarity shown to Ireland by our European partners is in stark contrast to the international response to the First Dáil. One of the main objectives of that Dáil was to obtain international recognition at the Paris peace conference that redrew the map of the world after the first World War.

However, the Irish delegation was given the cold shoulder as the major powers showed solidarity with the British by refusing to countenance the claims for Irish independence. What a change a century later when European solidarity with Ireland has left the United Kingdom isolated and facing an uncertain future.

That said, it should be remembered that intransigent EU-hating Tories are only one segment of British opinion and now, just as a century ago, they do not represent the views of all or even of a majority of their fellow countrymen and women.

One of the main reasons why the First Dáil and its successor persuaded the British government to grant independence was the pressure of British public opinion, which accepted the legitimacy of Irish national aspirations and was revolted by the government’s repressive response. The British empire was the most powerful military machine on the globe at the time, with the capacity to crush the Irish rebellion in a matter of weeks – or even days – but British democracy recoiled from such a response.

From an Irish perspective, it is worth considering why we are one of the very few nation states born 100 years ago that has remained a parliamentary democracy. One of the main reasons was the strength of democratic institutions already taken for granted long before independence such as fair elections, an independent judiciary and a free press. All of them were the legacy of British rule.

The fundamentally decent side of British democracy was represented in Ireland this week by former prime minister John Major, who travelled to Longford to deliver the Albert Reynolds memorial lecture and also made an important speech in Dublin. A quarter of a century ago Major and Reynolds embarked on the political initiative that laid the foundations for the Belfast Agreement.

In Longford, Major spoke words of wisdom about the common interests of our two islands. “Some opinion including many who believe themselves to be unionists has shown a breathtaking ignorance. To them, Irish demand for a backstop is a bogus ploy to keep the UK in the customs union. In truth, a backstop is a vital national interest for Ireland and the UK.”

The acknowledgement that both countries have a strong interest in maintaining a frictionless Border in Ireland was central to Theresa May’s approach to the Brexit talks but her efforts to deal with it were complicated by the negative influence of the Democratic Unionist Party, which saw a conspiracy to undermine the union where none existed.

It was to appease the DUP that May pressed for a UK-wide backstop rather that one limited to Northern Ireland. That UK wide backstop and particularly how it might end is what provoked most concern among Conservative backbenchers.

One way out of the current impasse might be for the British government to abandon the UK-wide backstop and agree to one specifically designed for the North. The DUP and a small number of Tories would certainly vote against it but it might have a better chance of success than the current plan. At the very least, it would expose Jeremy Corbyn’s breathtaking hypocrisy. It is time for decent middle England to assert itself.