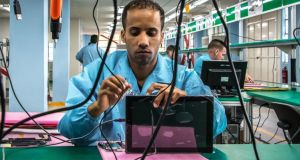 Wrapping its arms around the world: China uses money it earns from selling cheap consumer goods to Cubans to invest in factories and other infrastructure back in Cuba, thus buying political influence as well as market share. Photograph: Adalberto Roque/AFP/Getty

One of the oddest things happening in the Irish economy is that unemployment is falling quickly but income-tax receipts are not rising in tandem. The Government is confused. When employment rises so should income tax. So why isn’t this happening?

A few weeks ago I was on the early-morning Air Canada flight from Havana to Toronto, and I noticed that virtually all the business-class seats were occupied by Chinese businessmen. This is now a familiar sight on international flights. China is wrapping its arms around the world.

Chinese merchants sell cheap consumer goods to Cubans, who buy them with hard currency earned in Havana from Canadian tourists. Some of that money goes back to China, where Beijing uses some of the money to invest in infrastructure back in Cuba, thus buying China political influence as well as market share.

Some money stays in Canada, where the Chinese are pushing up the price of real estate as they buy apartments on Toronto’s lake shore – a personal insurance policy against China lurching back to old-fashioned communism.

The powerlessness felt by the average voter stems from the reality that, over the past 20 years, wages have been slipping back constantly relative to profits

A Canadian sitting beside me on the flight chatted about her country: how everything was so expensive now in Toronto and how her salary didn’t stretch any more. She couldn’t figure out why that was, because Canada was booming, yet she felt she was going backwards.

She is not alone. This is a typical conversation all over the West. How many times do we hear people in Ireland ask, “If things are going so well, why am I not feeling it?”

Could there be a connection between the Chinese businessmen on the Air Canada plane and the fact that people in Ireland feel they are struggling to keep up?

In the past few years we’ve seen strong economic growth, yet the feeling of prosperity for the average working person remains elusive. In contrast the extremely wealthy have taken a disproportionate amount of the goodies. This disparity between headline economic rhetoric and everyday social reality drives populism –particularly in the US and the UK – at the ballot box.

Voting in protest against the establishment is a bit like telling your boss where to stuff his job. You know it’s probably not the cleverest thing to do, but at the time it feels great.

But rage is the weapon of the powerless, not the powerful. And the powerlessness felt by the average voter stems from the reality that, over the past 20 years, wages have been slipping back constantly relative to profits.

In any economy the goodies are roughly divided between wages and profits. When something is sold the income goes to workers, in the form of wages, or to the people who own the company, in the form of profits. If people are more productive their wages go up. At least that’s the theory.

In practice something different is happening. Irish workers are generating huge amounts of income but getting only a fraction of this in wages.

The accompanying chart shows Irish productivity per worker and real wages over nearly 60 years. From 1960 to 1990 wages and productivity went hand in hand. In fact for 30 years wages were a bit higher, meaning profits were lower. This goes some way to explaining the very fragile state of corporate Ireland up to 1990.

But around 1994 Irish workers’ productivity takes off, while wages just tip along, always increasing but never by much. The gap between Irish productivity and wages opens up dramatically. That gap is part of the reason why the economy is posting stellar numbers but we don’t feel it.

Since the 1990s multinational corporations have driven up Irish income by enormous investment, using fewer and fewer workers to produce more and more stuff. The more capital the largely American firms deploy in Ireland, the more they export and the more productive the workers who work in these plants become. Because the volumes produced are so huge the multinationals have distorted productivity.

In Ireland the huge housing boom-bust-boom has led to income from property, such as rents, rising more quickly than wages. This, too, makes people feel left behind

But that’s not all. In Ireland the huge housing boom-bust-boom has led to income from property, such as rents, rising more quickly than wages. This, too, makes people feel left behind.

Meanwhile, in the past 25 years, central banks have worried about inflation more than growth, and therefore each recession has been taken as an opportunity to wring more inflation out of the system.

In plain English this means that the worker pays. In a recession, unemployment rises and wages fall. When the economy turns and the worker gets up off the canvas, he does so at a lower real wage than before. This outcome is policy-inspired wage compression.

In addition, technological disruption has made workers cheap all over the world. And this is where our Chinese friends come in. Technology allows companies to scour the world for cheaper workers, and therefore the cost of labour around the world has converged.

Granted, certain professions have done well as a result of technological change, but, on average, wages have been kept in check by competition.

The global supply chain means that the global pool of workers, rather than the national pool, sets the national price of labour and therefore wages. You could say the labour force has been Uberised.

When local workers lose their jobs because the jobs have migrated somewhere else, those people try to get other jobs. Typically, they slip backwards into jobs that are less well-paid, because they still have to put bread on the table. This puts further pressure on lower-skilled jobs, explaining Ireland’s conundrum. We are creating jobs but at wages so low that these workers aren’t paying income tax.

Societally, this global process leads to more inequality between citizens who depend on wages for their income (the vast majority) and those who depend on rents, dividends and assets (a small minority).

Politically this drives populism, as disenfranchised workers might not have good wages but do have legitimate votes, and the ballot box gives them the possibility of revenge.

In 2018 this conundrum is not going away.