Tax is not just about raising revenue, it is a legitimate part of our economic arsenal 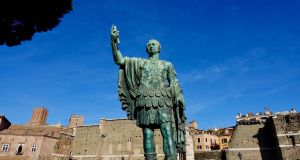 The Romans were so enamoured by urine that they taxed it, leading to the wonderful expression, attributed to the emperor Vespasian: ‘pecunia non olet’, meaning ‘money has no smell’. Photograph: iStock

Whether they be city states or countries, all jurisdictions that experience growth rates and increases in prosperity that, for a time, dwarf those of their neighbours tend to have deployed an innovation, a resource or a policy that gives them a unique economic advantage.

For France, that policy might have been mass and brutal colonialism in Africa. For Holland it could have been the wholesale plunder, at gunpoint, of the natural bounty of Indonesia and Borneo. For Belgium, early 20th-century wealth came with the gruesome hacking-off of the hands of men, women and children in the Congo in order to force the enslaved African population to produce more rubber.

1 ‘I wandered around Dublin wondering: Is this what they call a capital city?’
2 Coronavirus: 50 new cases and no further deaths reported in the State
3 Fresh investigation into the murder of Michaela McAreavey in Mauritius
4 Funeral of John Hume hears peacemaker ‘gave dignity and life to so many people’
5 Irish in Canary Islands: Life has changed dramatically
6 NPHET calls for ban on non-essential travel from countries with high Covid-19 rates
7 Coronavirus punches €8.3bn hole in public finances
8 BofI to cut 1,400 jobs as Covid-19 drives €937m loans charge
9 Restaurateurs say new 11pm closing time is ‘a body blow’ to sector
10 Trumpism may be dying but is still dangerous
11 Ford Kuga: Impressive plug-in hybrid SUV underlines motor giant’s renaissance
12 In Oz, Marianne would have told Connell: ‘Get stuffed, you gutless wonder’
13 Donohoe does not commit to specific compensation for pubs
14 ‘This was like a nuclear bomb’: More than 2,700 injured in Beirut explosion
15 ‘There were times I had to step outside to hide my tears, take deep breaths and then carry on’
16 Beirut explosion: At least 135 killed as rescuers search for survivors
17 Ryanair and State agree accelerated hearing of challenge to travel restrictions
18 Two former solicitors remanded on bail after being charged with fraud offence
19 Boy’s treatment by school over alleged thefts was ‘unbelievable’, judge says
20 Irish scientists shed new light on why exercise promotes bone growth
21 When Covid subsided, Israel reopened its schools. It didn’t go well
22 Cool, dull July as Co Kerry recorded wettest day since 1940
23 Is Cameron Diaz’s ‘clean’ wine as revolutionary as she thinks?
24 ‘I’m lucky to be alive’: Irish citizens describe Beirut explosion
25 Ireland needs to move to ‘zero-Covid’ policy to avoid catastrophe, scientists say
26 John Hume obituary: Nationalist leader who championed ‘agreed Ireland’
27 Shooting soldiers in a handball alley: Amelia Stein’s The Bloods
28 Social worker overcomes poverty to graduate with master’s degree
29 Five of the best foundations to try as the world comes back to life
30 Trump flounders in interview over Covid-19 cases and deaths
31 Pubs to stay closed and restrictions to remain on all gatherings, Cabinet decides
32 10 suspected stolen dogs recovered by gardaí in Co Limerick
33 The breaking point in Belarus has been made flesh in Svetlana Tikhanovsky
34 Sacrificing pubs for schools: Ireland’s latest Covid trade-off
35 Samsung unveils new Note devices as Unpacked goes virtual
36 Marlet begins delivery of 216 apartments in Dublin’s south docklands
37 Pubs to stay closed until September at least as restrictions tightened significantly
38 Kathy Sheridan: Hume and Lewis cut from the same cloth
39 Irish household wealth hit by stock market crash in March
40 Hume brought to Derry as candles in windows light his way
Real news has value SUBSCRIBE