David Gwynn Morgan: What exactly is a caretaker taoiseach?

There is very little solid ground, from political practice or legal authority to help answer the question 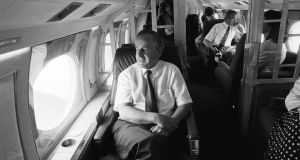 As regards the question of making major appointments, when Mr Reynolds, as caretaker, in 1994, filled two casual vacancies in the Seanad and appointed an Irish consul in Pakistan.Photograph: Matt Kavanagh

One of the few things, which does seem relatively certain amidst the encircling gloom of uncertainty is that, come Thursday evening, we shall have a caretaker taoiseach.

What exactly is a caretaker taoiseach or, for that matter, what is the role of his colleagues, the caretaker ministers? The answer is that we owe the first bit of clarity (though not the coinage) in this field to one Charles Haughey. Returning to the Dáil, after the 1989 general election, the motion to re-elect him taoiseach, was fairly decisively rejected. His reaction was to proclaim that the Constitution did not require him to resign and assume the sack- cloth and ashes of a caretaker, until a ‘reasonable interval’ had elapsed (no help given as regards how long is a piece of string).

In support of this proposition, Mr Haughey claimed ownership of that mysterious and powerful talisman, a Legal Opinion, the modern equivalent of the Delphic Oracle. (Interestingly, no attribution to the then attorney general, who might have been embarrassed.) In response, Mr Haughey was told, by Dick Spring, that there was no reference in the Constitution to any requirement of a reasonable delay and no need, on the ground of practicability or anything else, to read in any such requirement. Furthermore, if Mr Haughey did not dismount from his high horse, Mr Spring would put the matter to the test, in the High Court, within the hour.

Mr Haughey took himself forthwith to the Áras, to resign and become caretaker taoiseach.

But what exactly are caretaker ministers and, in what ways are their powers less than those of the real things? There is very little solid ground, from political practice or legal authority to help. Indeed, the situation is so fraught with uncertainties in all directions that if the question were squarely presented to a court, one would expect the judge to (wisely) seek refuge behind the ‘political question’ doctrine. Put briefly, this states that some issues are so much a matter of political judgment, with no objective legal principle for guidance, that it is wisest for judges to leave well enough alone.

One old chestnut, which is particularly close to home at the moment, is whether former ministers can remain even if they have lost their seats in the Dáil. More significant is the question of whether a caretaker taoiseach carries the authority to advise a dissolution and fresh election. If so, might we be condemned to a sort of perpetual constitutional revolving door?

As regards the question of making major appointments, when Mr Reynolds, as caretaker, in 1994, filled two casual vacancies in the Seanad and appointed an Irish consul in Pakistan, there was criticism, although no court case was taken. What about the appointment of judges, senior civil servants or positions in the Garda or Defence Forces?

It is sometimes suggested that, when it comes to the making of a new substantive government, the involvement of the president, as a senior non-political figure, to knock heads together, could be useful. This suggestion seems to me to be seriously uninformed. In the first place there is nothing in the Constitution to warrant (or, in fairness, to rebut) it. More importantly, we have now quite a history of the formation of unexpected Irish governments, from: Labour support( from outside)for Fianna Fáil, in 1932, to the Government that was formed in 1948 ( in the Law Library?), to the most surprising alliance between Fianna Fail and the PDs, in 1979, to the Rainbow government of 1995, which was formed despite the earlier jilting of John Bruton.

What this breathlessly summarised history shows is that Irish politicians are sufficiently mature, non-ideological and gifted in people skills not to need any match-maker.

If one takes an optimistic view and contemplates the sunny uplands on which a steady, long-lasting administration has been formed, one of the bases which has been suggested for this achievement is that of a minority Fine Gael government, supported from outside by a ‘confidence and supply’ accord with Fianna Fáil.

Outside such issues, the future minority government which is under discussion would have to work with whatever legislation the majorities in each House choose to send it.

In practice, if executed in a full-blooded way, this would certainly be a brave new world. And also one very unfamiliar to: politicians (whose time would have to be used very differently), their staff whose numbers would grow, civil servants of the Oireachtas and Government departments, including the drafts persons of the Attorney General’s chambers. Considering that the product might be not what they have come to expect, the consumers, that is lawyers and judges, might react in unexpected and undesirable ways.

In view of all this, Micheál Martin’s opening gambit that Dáil reform should precede government-formation is of huge significance. Reform has been on or near the politely agenda for a long time. I recall, for instance,a sparkling paper on the subject, written by a young energetic John Bruton in the 1980s.

If we wait for Dáil reform, as opposed to say an agreement for ministers to consult privately with their Fianna Fáil opposite numbers, along the lines of the British minority Labour government’s arrangement with the Liberals, in 1977-9, we shall wait a long time. Certainly, we would be stuck with a caretaker government for several months at least and some of the hypotheticals conjured up earlier might come to seem very small beer indeed.

1 Woman stranded in Ireland due to pandemic has ‘miracle baby’
2 Don McLean: ‘My ex-wife is the worst person I ever knew’
3 ‘Difficult months ahead’: Europe prepares for more pain as Covid cases soar
4 Saving Tim Robinson’s Roundstone home, his last gift to the Irish nation
5 Two hundred Irish retailers for all your online Christmas shopping
Real news has value SUBSCRIBE