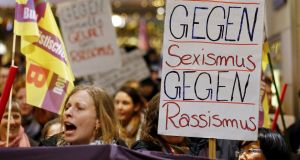 Women shout slogans and hold up a placard that reads ‘Against Sexism – Against Racism’ as they march through the main railways station of Cologne, Germany, earlier this month. Photograph: Reuters/Wolfgang Rattay

What happened in Cologne on New Year’s Eve defies easy explanation. How can one explain squads of men methodically groping women?

It is an act of group sexual aggression on a sliding scale that ends in the rape of civilians by armies in wartime.

Yet instant answers are just what today’s highly competitive and commercialised 24-hour media cycles crave, and what online commentators provide.

For their part, journalists have moral and professional responsibilities not to produce material likely to lead to hatred or discrimination on the grounds of race, colour or creed.

That does not mean that if men from Muslim countries, some refugees, assault German women then journalists should ignore the story. The public has a right to know.

But any hesitation in reporting events as they seemed in Cologne was no cover-up. Fools rush in where angels fear to tread. Facts must be checked, especially if police deny them.

Good journalism is threatened by the pressure on reporters to file succinct stories quickly and often, and by a shortage of experienced and mature reporters due partly to cost-cutting by media owners.

It is threatened too by fear among the public. There is comfort in taking sides, not in complexity. Lazy journalists pander to prejudice, including that of their employer and loyal readers.

Do all Muslims hate women? Obviously not. But the failure of some media to respect Muslim culture, to distinguish between types of belief and kinds of Muslim leaves readers and audiences floundering when big stories break.

Too few media have a reporter full-time on the Muslim or migrant beat.

Respected academics and journalists on both sides of the Atlantic highlight examples of prejudice and of persuasive selectivity when the media meet Islam. “Islamophobia”, the fear of Islam, is not irrational if the only Islam you know is the dogma of people who wish to harm or oppress you.

We Irish fought long and hard for civil liberties, first against the British and later against a Catholic hierarchy. But media that effectively equate all types of Islam are hysterical.

Some that ask why Muslims are not condemning attacks such as Paris reveal ignorance of a reality in which most Muslims eagerly make clear their disdain for Islamic State.

No fact supported the latter assertion, and no quotation marks indicated that it might be just an opinion.

It turned out to refer to a poll in which people simply expressed “CONCERN” that terrorists “COULD” enter Ireland as migrants, and almost half believe Jihadist terrorists are already here alongside our homegrown variety.

Not that “facts” alone guarantee good journalism. A reader needs to know whose “facts” are being reported, whose “atrocities” highlighted.

Maturity means seeing right and wrong on both sides, but not always equating them. Relativism does not have to trump democracy or common sense.

It takes time, experience, resources and freedom to tackle complex issues. With some media compromised by owners’ agendas, and some profiteering by simply pandering to prejudice, there are too few experienced journalists even at the starting line when stories like Cologne break.

Politicians talk of defending western values. But a fundamental value that underlines all democratic society is freedom of speech. That freedom becomes meaningless when reduced to excited and poorly informed shouting.

I worked in Cologne during 1969 and tension between Germans and their many foreign, mostly Turkish, Gastarbeiter (guest-workers) was palpable there even then.

Yet Germany’s memory of the suffering of its own displaced citizens after the second World War, and its experience of immigration since that time, equip it well to help Europe deal effectively with the current crisis.

Angela Merkel may feel let down by the reaction of other European governments to migration, with some perhaps suspecting self-interest in Berlin’s reception of many educated Syrians rather than poorer or darker nationalities to boost its falling population.

And she has surely been let down now by some of the foreigners whom she recently welcomed to Germany.

But the public is let down by media that rush to take sides and beat drums, that ignore inconvenient facts sooner than tease out complexities.

1 Seán O’Brien: Anger over my parents’ break-up never left me
2 Sacha Baron Cohen: ‘I had to ring the alarm bell and say democracy is in peril’
3 Further anti-lockdown protest held in Dublin city centre
4 We need to reverse our thinking on lockdown
5 Covid-19: Taoiseach warns ‘bumpy roads ahead’ as 859 cases and four deaths reported
Real news has value SUBSCRIBE