Cliff Taylor: We can’t assume the recovery will continue but lets leave Pudsy out of it 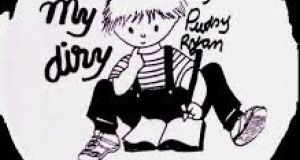 Pudsy Ryan, apparently a schoolboy character in an old missionary magazine who had trouble with his schoolwork got a mention this week. 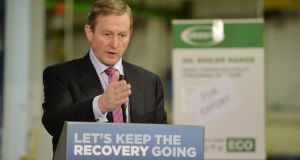 Taoiseach Enda Kenny: “You would have thought that the political and economic cycles could not have coincided so nicely for Enda Kenny’s Government.” Photograph: Alan Betson/The Irish Times

As one observer put it to me, the Coalition may be feeling a bit like Churchill after the second World War, when the British public more or less said in the 1945 election: “Well, thanks for all that, but we are looking for something different now.”

Fine Gael and Labour no doubt went into the campaign feeling they had won the economic war, with a growth rate of 7 per cent, unemployment tumbling and incomes on the up. You would have thought that the political and economic cycles could not have coincided so nicely for Enda Kenny’s government.

But as Fine Gael and Labour have struggled to sell the “keep the recovery going” message and the voters seem to shy away from old-style auction politics, let’s look at what might happen over the next week. Because we are heading for a battle in which the Government parties will try to pump up the fear factor.

We are already in the middle of the “battle of the black holes”. Michael Noonan has attacked Fianna Fáil’s plans, saying they have no provision for public sector pay rises beyond 2018. In turn Fianna Fáil has launched an attack on Fine Gael’s assumptions.If this goes on for the next week – interspersed with Fine Gael Ministers telling us they “have an economy plan” – it is not going to be much fun.

Fine Gael and Fianna Fáil are already like two heavyweight boxers hanging out of each other and desperately trying to land a late punch. An interview on RTÉ’s Morning Ireland saw Michael Noonan involving Chicken Licken and Seán Fleming bringing up Pudsy Ryan, apparently a schoolboy character in an old missionary magazine who had trouble with his schoolwork. I doubt this is winning too many voters for either side.

The battle of the black holes is relevant only insofar as voters need to believe their leaders can add. But when you consider that even a 1 per cent shortfall in growth will lead to a couple of hundred million disappearing from tax revenues, the rows about the precise arithmetic in the party plans will only take us so far. The voters can expect to hear more striking and simple messages next week as the Coalition tries to put the focus on what happens if it is not re-elected.

What should we really be afraid of ? Not the “ black holes” claimed by the finger-pointers on both sides, I wouldn’t think. Whoever goes into government will have to sit down and negotiate a programme and over time this will all be costed by the Department of Finance and overseen by Brussels. The party programmes are best seen as a sign of where they would put their priorities, as opposed to a year-by-year outline of exactly how things will work out.

So the fight in the last week is going to move beyond the black-hole bunfight and come down to “stability” and “trust” and who we can have faith in to manage the economy. And to the risk of instability, or of putting the other guys in charge.

Some of this will be overplayed. The country will not fall apart overnight if a new government is not formed immediately. Yes, there could be a bit of fallout in our national borrowing rate if there is a period of flux, but the “permanent government” – the Civil Service – will effectively run the country as the politicians try to put something together.

And the option of a Fine Gael/Fianna Fáil coalition remains. Even a second general election would not turn the economy upside down, though it could cause a period when some investment decisions – in our bond market and in business – were put on hold.

But who is in power does matter. Some have argued during the campaign that Ireland’s fate is almost entirely dependent on international events. And yes, these will be vital. Brexit, were it to happen, would cause a major upheaval, for example, likely more than anything caused by the election result.

Enda Kenny went into the general election without a clear alternative as taoiseach. But rather than providing an advantage this may have hindered Fine Gael. It has not provided the clarity of choice to voters of whether they would prefer A or B as taoiseach.

In this vacuum, many have told the pollsters they will opt for C, voting for Independents or smaller parties. Whether the fear factor can move some of these voters back in the Coalition’s direction in the last crucial week is now the big question.

1 Ireland among countries urged to consider reinstating Covid-19 restrictions
2 Lowest numbers in two weeks as one more Covid-19 related death and 35 new cases reported
3 Minister promises Leaving Cert students grades will be assessed fairly
4 ‘I’ve been sleeping with my girlfriend’s sister. I need help. What do I do?’
5 Ward at Naas General Hospital closed due to suspected Covid-19 outbreak
Real news has value SUBSCRIBE