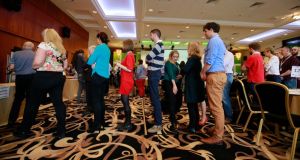 The Citizens’ Assembly voted to allow abortion up until birth on six grounds. Photograph: Nick Bradshaw

Economist Moore McDowell dissected how representative the assembly is in a forensic letter to this newspaper, and the answer is: not representative at all.

There was a startling callousness towards even the viable baby. The members were invited to vote if they wanted to never allow abortion on a particular ground, or whether they wanted to allow it up to 12, 22 or no term limits. One member queried why the limit could not be set at say, 18 weeks?

Elizabeth Dunn, a consultant obstetrician in Wexford General Hospital, answered by saying the limits were based on two speakers, and in particular, Patricia Lohr of the British Pregnancy Advisory Service (BPAS).

So the assembly took its guidance on gestational limits from BPAS, the UK’s largest provider of abortion, the chief executive of which, Ann Furedi, believes that while abortion “may be an act of killing”, the killing is justified because the moral status of the foetus is not sufficient to protect his or her right to life.

Remember, in Britain, where BPAS is the major provider, abortion is legal right up until birth on the grounds of significant foetal disability, which is considered to include Down syndrome, cystic fibrosis and cleft palate.

Dr Dunn then said that after 22 weeks, “There is a risk that the foetus would be born alive and we’re looking at from 22 weeks onwards you would have to inject potassium chloride. I know that you had two speakers in January talk about that.”

Dr Dunn was referring to foeticide, of using ultrasound to guide a 15cm needle into the baby’s heart to inject it with potassium chloride (or digoxin) in order to ensure cardiac arrest and the death of the baby.

The Royal College of Obstetricians and Gynaecologists explains why: “Where the foetal abnormality is not lethal and termination of pregnancy is being undertaken after 22 weeks of gestation, failure to perform foeticide could result in live birth and survival, an outcome that contradicts the intention of the abortion.”

Certain speakers were presented as impartial experts rather than as having a vested interest and being well-financed advocates of an Orwellian term: reproductive rights

The assembly had had explanations from a number of doctors as to what abortion entails, including Dr Peter McParland from Holles Street, who also stated that the ready availability of non-invasive prenatal testing was leading to the virtual eradication of people with Down syndrome in Iceland and Denmark.

Although he said that people with Down syndrome live until 50 or 60, “the science has got way ahead of the ethical discussion. As a society we have not reflected on what the implications are.”

This did not trouble the members. After having it clarified that after 22 weeks foeticide by lethal injection is necessary to prevent live birth, they went on to vote for abortion up to birth on eight different grounds, and up to 22 weeks on most others, including for non-fatal disabilities such as Down syndrome.

We are told that the assembly result came about because of listening to experts and that somehow, a radical abortion regime is inevitable if you listen to experts. Obviously, the people suggesting that prefer to ignore the real explanation: the fostering of groupthink.

To give one example, in relation to the most serious life-limiting disabilities, although neither Holles Street nor the Irish National Standards for Bereavement Care Following Pregnancy Loss and Perinatal Death use the term fatal or lethal foetal abnormality, the assembly chose to use it.

This is called framing. It is a well-known technique designed to influence opinion.

Furthermore, certain speakers were presented as impartial experts rather than as having a vested interest and being well-financed advocates of an Orwellian term: reproductive rights. But even when experts presented views that clashed with providing abortion for any reason whatsoever, they were ignored.

If the parliamentary committee chooses to have hearings, it will have to ensure that it is not just a mockery of consultation. The hearings prior to the Protection of Life during Pregnancy Act were well managed and respectful – and completely ignored anything contrary to what the Government wished, no matter how well the suggestions were backed up by scientific evidence.

Just as in 2013, we will be told that the new allegedly limited legislation will not open the way to a more extreme regime. Not immediately, is the answer to that; but, drip by drip, the rights of the youngest humans are being eroded. Only retaining the eighth will prevent the eventual realisation of the dreadful, inhumane wishes of the Citizens’ Assembly.

1 Conor McGregor stops Donald Cerrone in 40 seconds on UFC return
2 ESPN, UFC ignoring McGregor’s shady actions to capitalise on pay-per-view king
3 I rationed sex in my marriage for 20 years - but since menopause, my libido has rocketed
4 The cost of a Dublin cottage refurb: ‘We struggled with the mortgage lending rules’
5 Harry and Meghan will no longer be working members of British royal family
Real news has value SUBSCRIBE