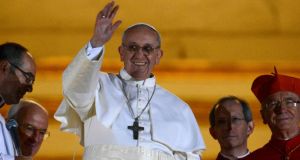 The choice of Cardinal Jorge Bergoglio to take office as Pope Francis I is an extraordinary leap away from the conservative and cautious nature of the last two papacies.

Although Bergoglio is described as a moderate conservative, the Jesuits have a reputation in the modern church for rigorous and independent thought. And under Pope John Paul II they were in deep disfavour for their sympathy with liberation theology in Latin America.

The election of a Latin American Jesuit would also have been unthinkable 30 years ago. The choice of Bergoglio shows a decisive shift in the church's centre of gravity away from Europe and towards the continent where most Catholics live, and where challenges to the church are different to those in Europe.

The overwhelming problem in Latin America is the shortage of priests and the shrinkage of believers. Although 40 per cent of the world’s Catholic population live on the continent, it can no longer be automatically assumed that a Latin American is a Catholic. Pentecostal Protestantism has made huge inroads, and, nowadays, secularism as well. These are problems which the church under John Paul II and Benedict XVI refused to confront head on. The choice of Bergoglio shows the question can no longer be dodged. If anyone can break the logjam around clerical celibacy, he is the man.

Although the church continues to grow in Africa, and the conclave shows that it can still hold the attention of the world when it puts on a show, the trend in most developed countries is deeply unfavourable. Partly as a result of shrinking family sizes – themselves a symptom of the way in which women ignore the teaching on contraception – Catholic church attendance in the developed world has been falling steadily in the last decade.

One in 10 adult Americans is now a lapsed Catholic. In North and South America those who leave the church tend to become charismatic evangelical Protestants or abandon religion altogether. In western Europe there is no other form of Christianity picking up the slack. The church’s attitude to women, its teachings on sex, and the corrosive effect of the abuse scandals are blamed by some; others claim that doctrinal drift and dull, spiritless services are responsible for the problem.

Either way, Pope Francis I faces a giant uphill struggle to remoralise his ageing clergy and inspire the flagging faithful while making his religion appear intellectually coherent, and morally attractive to outsiders.

In this context it is vital that high-ranking Catholics in the Vatican have shown real interest in the evangelical Alpha course pioneered at Holy Trinity Brompton. This marries conservative doctrine with great social flexibility and an emphasis on charismatic practices like talking in tongues and the expectation of miracles. It also emphasises the role of women, though mostly as part of clergy couples. And the ordination of married men to the priesthood is the single most talked about solution to the crisis of the Catholic clergy.

The presence of priests is central to a flourishing Catholic Church. Only they can celebrate the Mass which is the central rite that nourishes and holds together congregations. Although the laity can, and do ignore the moral teachings and efforts of leadership of their priests, they have to have their services. And there is a huge crisis in the priesthood in many of its historic heartlands. Battered first by a widespread rebellion against compulsory celibacy – more than 100,000 priests were dispensed from their vows to marry in the 1970s and 1980s before John Paul II made it almost impossible as part of his more general crackdown on liberalism – and then by the reputational damage of the abuse scandals, the clergy had dwindled and aged at astonishing speed. The average age of American priests has risen from 34 to 64. The whole of England and Wales produces fewer priests a year than almost any single Anglican diocese. Seminaries have closed all over the western world. A high proportion of the remaining clergy are thought by qualified observers to be gay, if often celibate. In the developing world, the regulations on celibacy are widely flouted.

Yet the obvious remedy, to end compulsory celibacy for the parish clergy, would bring fresh problems in its wake and is certain to be resisted until it becomes unavoidable. Nonetheless, the election of a Jesuit is significant. Priests in religious orders, unlike the “secular” parish clergy, take deliberate vows of celibacy. It is not offered as part of a package deal with their vocation. So they are better placed to see the effects of the discipline on those who less willingly accept it. Although difficult to imagine a release of ordained clergy from their vows, a move to ordain married men would make a huge amount of sense and may well be inevitable.

But this cannot happen without a thorough clearout of the conservatives in the Vatican. The Curia, as the Vatican's bureaucracy is known, has been shaken by numerous scandals in the last eight years. The jailing of Pope Benedict ’s own butler for leaking documents was the most notable case. But in those papers, and in the report prepared into them, there were allegations of financial corruption and of the existence of gay networks of influence. [CROSSHEAD]
Money-laundering protocols [/CROSSHEAD]
The reluctance of the Vatican bank to sign up to European money-laundering protocols means that it is unable to offer any cash machines inside the city state.

All these are symptoms of a wider malaise. The curia is essentially a court in which promotion is by favour of powerful barons, who themselves hold office at the discretion of the pope. It operates with a remarkable combination of sloth and caution. In a world of lightning international communications, it is constantly embarrassed. Although it has managed to stamp out any open dissent from the church’s more controversial doctrines, among the bishops and in Catholic universities, it has been incapable of anything positive. The first Jesuit pope may show that independent thought was all the time flourishing in the wider church and with it an escape from stifling centralisation.