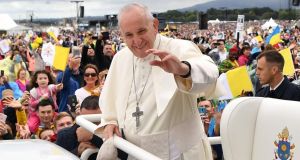 Pope Francis in Phoenix Park in Dublin: made a point of repeatedly asking for forgiveness for the wrongs perpetrated by those who abused their position of trust in the Catholic Church. Photograph: Ben Stansall/AFP

There has been much reporting of the ongoing revelations of abuse scandals within the Catholic Church. Indeed, it has dominated the coverage of the recent papal visit. I was heartened to see that the survivors who met Pope Francis were pleased with the meeting and felt able to express themselves fully and be heard by the pope. It was the least they deserved.

The World Meeting of Families was a showcase of the truly catholic nature of the church – diverse, all-encompassing, universal. People of every age, every background, every nationality descended on Dublin last week. Many Catholics volunteered not only their time and efforts to welcoming, shepherding and caring for the visitors but opened their homes to give them a warm, hospitable welcome during their stay.

The crowds in the RDS, Croke Park and the Phoenix Park, all of which I saw first hand, were remarkably good-tempered. In keeping with the theme of family, there was a genuine sense of fraternity throughout the various venues. There was also a strong presence of those Catholics throughout the country who recently fought faithfully and bravely to stand up for the rights of the least visible of our children – those not yet born. Pope Francis’s words in Dublin Castle, although almost entirely ignored by the media, remain with me: “Could it be that the growth of a materialistic ‘throwaway culture’ has in fact made us increasingly indifferent to the poor and to the most defenceless members of our human family, including the unborn, deprived of the very right of life?”

During the five-day meeting, there was hope and joy and solidarity among Catholics who, for the most part, feel embattled in the secular, “throwaway” culture in which we live, having to deal with persecution from without and corruption from within the church.

The World Meeting of Families shone a light on persecution suffered by Christians. These threats from without take different forms in different countries: from kidnapping, torture and threats of physical violence and death in the developing world to intellectual and legal persecutions in the developed world. In Ireland, we see this in the Government’s current proposal to force doctors to be complicit in facilitating abortions against their conscience.

As for the corruption within, the pope made a point of repeatedly asking for forgiveness for the many wrongs perpetrated by men and women who abused their position of trust in the church. Some have criticised him for asking for forgiveness, rather than saying sorry, but it is important to understand that saying sorry is often easier. “Sorry” is a full stop that puts an end to the communication. “Will you forgive me?” is a question that requires an answer and admits to the possibility that the other person might say “No”.

There are those who say that reform is needed not only in relation to abuse, but that the church must change her core teachings

Next to abuse survivors and their families, it is the faithful who are most hurt by revelations of abuse and corruption. The church is described as the body of Christ and when one part is wounded – as in those abused – or another part rotten – as in the abusers – the whole body suffers.

There are those who would kill the body to cure the disease, but faithful Catholics know that this is not the answer. There is healing to be found, painful though the procedure may be; and, above all, the faithful hold to that most Christian of virtues – hope.

Fr Patrick McCafferty, one of the abuse survivors who met the pope, put it best when he said: “Failure to grapple with this sin and crime is hindering the church’s capacity to bear witness in other vital areas, such as the right to life, the importance of marriage and the joy of family life.”

For ordinary Catholics, trying their best to live and raise their families and bear witness to the gospel, the drip-drip effect of the revelations is agonising, as Fr McCafferty pointed out. For the flock, it sometimes feels as if we are in the charge of wolves who would devour the lambs, or hirelings who would flee at the first sign of attack.

Although much of the reporting focused on the pope’s personality, many of the faithful who came to see him did so not because of the man, though he is well liked, but because he is the leader of the church and successor of St Peter. It is to the church – the gift left to the world by Christ – and to Christ himself – the Good Shepherd – that Catholics owe their allegiance, not to any one man or personality, as I am sure Pope Francis would acknowledge.

It is widely recognised, including by abuse survivors such as Marie Collins, who gave an excellent presentation in the RDS, that the reporting procedures in Ireland are very robust. However, there are parts of the world where this is not the case and, without doubt, reform is needed to make sure that wherever the church is, similar procedures are followed.

However, there are those who say that reform is needed not only in relation to abuse, but that the church must change her core teachings. The central tenets of Catholicism cannot be changed without it becoming something different.

The hope of change that those calling for doctrinal reform seek is not personal change, but rather that the church deny fundamental truths to accommodate their ways of living. This is an old project.

Those who, in their arrogance and pride, believe themselves to be above God’s law are never far from abuse

St Paul wrote: “The time will come when men will not put up with sound doctrine. Instead, to suit their own desires, they will gather around them a great number of teachers to say what their itching ears want to hear.”

In Utopia, St Thomas More talked of how men would rather not change to conform to Christ’s rule, but instead prefer to bend it, as if it were a leaden yardstick, to suit themselves. Both he and St John Fisher – the only bishop in England to remain faithful to church teaching on marriage in the face of the persecution of Henry VIII – felt just how unaccommodating those who seek to accommodate Christ’s teaching to the way they live can be.

The hubris of our age is the idea that moral progress has tracked technological progress, so that our behaviour becomes the criterion by reference to which church teaching is to be judged, rather than the other way around.

Those who, in their arrogance and pride, believe themselves to be above God’s law are never far from abuse. This is what allowed abuses – clearly contrary to the law of the church – to be perpetrated and facilitated in the past.

Instead, the Christian is called to humility – which involves sacrificing oneself and one’s immediate desires to a greater cause. In a materialistic “throwaway” age, this message is a hard sell. How many really want to sacrifice immediate personal gratification for someone else or something greater?

And yet that is the message at the heart of the Christian family: duty, sacrifice and, above all, love.

Maria Steen is a barrister