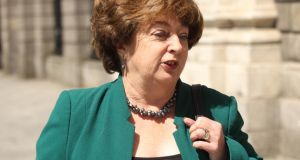 ‘When the Minister eventually announced the review into certain IBRC deals, I was dismayed at the terms of reference and that way in which it had been established.’ Photograph: Collins Courts

The clarification issued by the High Court yesterday surrounding the terms of an injunction into the reporting of various aspects of the IBRC governance relationship with Denis O’Brien is very welcome in that it we now have clarity that citizens are most definitely entitled to access fair reports of Dáil proceedings and to hear what their elected representatives have said.

Back in late 2014 I began raising issues of concern regarding the extraordinary circumstances surrounding the sale of Siteserv – a company whose subsidiary, GMC/Sierra went onto win a number of the metering contracts with Irish Water. I was concerned, for example, that the shareholders of Siteserv had got a payment of €5 million despite the company being financially unstable, I was concerned that there appeared to be significant overlap between the personnel involved for both the seller, the purchaser and the advisers to the sale.

Ultimately I was concerned that the citizens may not have got the best deal they could have in relation to the Siteserv sale.

I pursued these issues through a series of parliamentary questions, Dáil l interventions and eventually Freedom of Information requests to the Department of Finance. I had asked 19 pqs, before I got a comprehensive reply, in April of this year from the Minister that indicated to me that my concerns were not only legitimate but were in fact shared by the Department of Finance.

The subsequent internal Department documents that I received under Freedom of Information went on to make it very clear that not only did the Minister and his officials share my concerns in relation to the Siteserv transaction but that their concerns went even further to the point that they repeatedly expressed concern regarding the effectiveness of the CEO and the management team within IBRC. These concerns extended to relationships between the management team and some of the senior debtors.

Once that rabbit hole had opened up it was incumbent on me, as a public representative to pursue the issue and try to uncover the facts of what had happened, not just surrounding the Siteserv sale but also in relation to all other deals completed under the auspices of a governance team that the Department had essentially lost faith in.

Remember that this is a bank that the State owns, where the Minister for Finance is the only shareholder and is answerable to the Dáil and here he is telling us that he couldn’t even communicate with the IBRC management team.

This brought me to the infamous “Prom night” in 2013 when the Dáil sat until 4am, and Anglo promissory notes were suddenly and hurriedly turned into sovereign bonds. In the Dáil that night the Minister went out of his way to praise the management team within IBRC yet here I was now in possession of documents from the Minister’s Department, one of which stated: “The poor management displayed in a number of these items along with the increased level of public concern and political and media scrutiny that they commanded is damaging the credibility of the institution and by extension the State”.

Given the hugely important disparities between the two accounts and my concerns as to why we were so rushed into “prom night”, I began investigating the wider governance issues within IBRC. This line of inquiry led to a number of different sources of information coming forward to me and opened up significant lines of inquiry.

At all times, on all the information that has come to me, I have sought, through the appropriate Oireachtas avenues open to me, to have the issues clarified by the Minister and to have the truth of all IBRC decisions put into the public domain. When we are dealing with a State owned bank which the Irish people were encumbered with, it is without doubt in the public interest for people to know that the institutions was operating above reproach and in the best interests of the Irish people at all times.

I immediately called for the review to be scrapped and for a full, independent and credible inquiry to be launched and that is what I continue to seek. In light of the information regarding the wider governance issues within IBRC and the way in which some deals were transacted, I assert that it has been wholly appropriate for me to seek to expand the powers of the Comptroller & Auditor General which is the remit of the Bill I introduced last Thursday.

It is also entirely appropriate for me to seek answers from the Minister and to urge him to put all relevant information into the public domain so that we may know the truth.

Catherine Murphy is an Independent TD