Rite & Reason: To be canonised on Sunday he is as much of the Anglican as Roman Catholic tradition 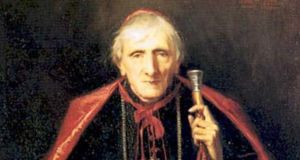 Theologian, scholar, educationalist, poet, novelist, convert, cardinal and blessed are some of the outstanding titles of John Henry Newman we can celebrate on the occasion of his canonisation in Rome next Sunday (October 13th).

Yet, 174 years after he converted from Anglicanism to Catholicism, it is his conversion that we remember as the great watershed moment of his life.

Newman, the convert, created a huge stir at the time as did those of his contemporaries who became Catholics in the Oxford Movement. There is no doubt but that the church then, and oftentimes since, saw Newman’s conversion as a boost to Catholicism that evoked a measure of triumphalism in the church.

But there should be no hint of triumphalism in his being declared a saint by the church. It is not the final “one in the eye” for Anglicanism that shows Newman’s conversion as the natural high point of his life. On the contrary, I see him as a saint of Christian traditions Catholic and Anglican.

I do so from a very simple realisation that if Newman was an Anglican today he may not have seen the need to convert, but would have worked quite happily in dialogue between the two churches.

Thus we would all benefit from his ministry.

We walk to heaven backwards; we drive our arrows at a mark and think him most skilful whose shortcomings are the least

One can only speculate that the ecumenical movement would have benefitted greatly as a result of his participation. In declaring Newman a saint, the church recognises in him a scholar who is as much of the Anglican tradition as the Catholic tradition. St John Henry might well be classed as the new patron of ecumenism. This would be a fitting accolade.

I never cease to be surprised by some new aspect of Newman’s work or life that suddenly crystallises in my mind as I reflect on his writings. More often than not it is an aspect of his humanity that strikes me most and it pleases me no end to see Newman in a more human light rather than the exclusivity and apartness into which his scholarly habits have sometimes sidelined him.

An example of Newman’s humanity is his recognition of life’s struggles. It serves to ground him in life’s ordinary human experiences. He lived a long life but struggled throughout with poor health, brought on at times by his almost workaholic commitment to his duties. It is his ability to recognise his own human error and frailty that appeals to me.

Newman wrote: “We do not see the truth at once and make toward it, but we fall upon and try error and find it is not the truth. We grope about by touch, not by sight, and so by a miserable experience exhaust the possible modes of acting till naught is left, but truth, remaining. Such is the process by which we succeed; we walk to heaven backwards; we drive our arrows at a mark and think him most skilful whose shortcomings are the least.”

Still our compulsion to judge others in the poorest of light.
Calm all our anger and save us
From the rough seas of frustration

One cannot but admire the depth of the line: “we walk to heaven backward.” This grounds him in the mundane and reminds me of the discomforting “smell of the sheep” guidance of Pope Francis who, like Pope Emeritus Benedict XVI, is a great admirer of Newman.

I welcome the many new books and articles that are symptoms of the Newman fervour prevalent in the run-up to his canonisation. I congratulate anyone who is engaged in such activity while admitting of my own book, being launched this week. Its purpose is what it says on the tin – to introduce people to Newman.

Newman was a poet and composer of prayers which are familiar to many and to mark the occasion of his canonisation I have composed a prayer to him. I have the added temerity to share it with you now.

“Dear St John Henry Newman,
You sought after truth and now you understand it perfectly.
Shine a little of that light of understanding on us your brothers and sisters in Christ.
Whenever we are becalmed and motionless in despair,
Inspire us with a gentle breeze to our backs.
Still our compulsion to judge others in the poorest of light.
Calm all our anger and save us
From the rough seas of frustration.
Lead us safely to port and a share in the perfect peace of God’s Kingdom.
Amen”