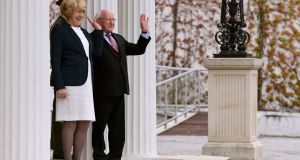 President Michael D Higgins’s wife Sabina said on Wednesday it was an “outrage” against women that in the case of “foetal abnormality” a person should be “made carry” the baby. Photograph: Clodagh Kilcoyne/Reuters

There’s a very simple rule for what spouses of heads of states can say about political issues: if you agree with what the spouse is saying it’s a good thing; if you disagree it’s a bad thing.

This was ably demonstrated by Sabina Higgins, wife of President Michael D Higgins, when she said on Wednesday it was an “outrage” against women that in the case of “foetal abnormality” a person should be “made carry” the baby.

The different camps fell dutifully into line to either congratulate or criticise Sabina Higgins. Experts in constitutional law were summoned to declare that there are no restrictions whatsoever on a President’s wife, or, indeed, members of his/her family, publicly expressing an opinion on a political matter.

Indeed, Mr Higgins’s daughter Alice Mary Higgins, who has just been elected to the NUI panel of the Seanad, is publicly in favour of repealing the Eighth Amendment, saying before her election that “there is a need for free safe and legal abortion in Ireland”.

It is purely convention that the spouse of the head of state doesn’t usually publicly voice opinions on political matters.

Criticism that Sabina Higgins was “abusing her power” overlooked the fact that she has no power; mentioning “that no one voted for her” is true to the extent her name wasn’t on the presidential ballot papers but spouses are taken into account by some voters – to what extent is not known.

Two years ago Mr Higgins was asked to comment on his wife’s visit to imprisoned peace activist Margaretta D’Arcy. He said it was “a private and personal visit” and the issue of whether it was appropriate “doesn’t arise”.

Simply because most political spouses are women they have to endure a tedious running commentary on their appearance. The fact that quite a few are better qualified and earned more money than their husbands pre-election is not deemed relevant.

Few people even know the name of Angela Merkel’s husband, let alone what brand suits he wears, what his fitness routine is or whether he exfoliates (all questions routinely put to female political spouses). Joachim Sauer (Merkel uses the surname of her first husband) is a professor of theoretical chemistry. But the spouse of the world’s most powerful woman never speaks to the media, and he didn’t even go to her 2005 inauguration.

The husband of the UK’s head of state, the Duke of Edinburgh, once replied to the question if he would like to go to Russia with “I would love to – although the bastards murdered half of my family”.

Margaret Thatcher’s husband Denis appeared to spend most of his time trying to prove that the BBC was run by “poofs and Trots”.

A recently published book on US first ladies: Grace and Power by Kate Anderson Brower, made for headlines such as “Apparently, Michelle Obama hates Hillary Clinton” and not for the analysis that when it comes to first ladies “impressions are made, images are spun and icons are created – but the real personalities of the women married to the most powerful men in the world are usually warped by partisan attitudes”.

The November US election, meanwhile, throws up the possibility of the first “first gentleman”, although Hillary Clinton has already indicated that she will pack her “dear husband” Bill off as a “roving ambassador” so as not to pull focus from her.

If Donald Trump is elected, his wife Melania Trump – a Slovenian ex-model – is already been talked about rather crudely as the “first hottie” as opposed to “first lady”. Even normally polite journalists are writing “with Melania Trump it’s best not judge a book – or in this case, a magazine – by its cover”.

Melania Trump told People Magazine that her hobbies were “pilates and reading magazines”. The last foreign-born US first lady, Louisa Adams (who entered the White House in 1825), by contrast enjoyed “quiet evenings of reading and playing the harp”.

Whoever wins in November, the East Wing is already looking a lot more interesting than the West Wing.

1 Coronavirus: One more death in Republic as expert warns house parties are ‘disaster’ for containment
2 ‘Frustrated and angry’: Thousands march in Dublin to protest death of George Floyd
3 Normal People: Full-frontal nudity was not its most radical feature
4 Should my mam wait for house prices to drop before buying?
5 Covid-19: Easing of restrictions ‘unlikely’ to be speeded-up
Real news has value SUBSCRIBE