Brexit will inevitably lead to the de-anglicisation of Ireland

The gap between Irish and British regulatory standards will inevitably grow 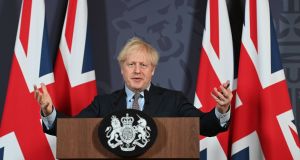 With Brexit becoming a legal reality in 2021, the relationship between Britain and Ireland will change significantly. There will be key dates, such as the end of the transition period on December 31st, but, as with most deep structural shifts, change is likely to take the form of an ongoing process rather than a single event.

These changes are likely to involve significant loosening of still-deep legal and political ties to the UK that have managed to survive a century of independence.

The most significant broader outcome of Brexit is the resolution of the ‘Boston versus Berlin’ debate. This debate began back in the glory days of the Celtic Tiger when Ireland saw itself as the posterchild of go-getting anglophone capitalism.

With Ireland booming the view that our EU partners were hidebound by excessive regulation was popular and then Tánaiste Mary Harney created a stir by suggesting that Ireland was “closer to Boston than Berlin”.

The economic crash of 2008 did not kill off this view. As late as 2013, influential commentators such as David McWilliams were arguing that Ireland should loosen its ties to the EU to become part of an English-speaking Atlantic arc made up of the US and UK.

In some ways the real choice was never really between Boston and Berlin. For reasons of history and proximity, the UK exercises much greater influence over Ireland than the US.

Given the widely-shared desire in the Republic to emphasise our distinctness from Britain, it was not politically feasible for an Irish minister to openly argue that we should emphasise our closeness to the UK over our relationship to the EU. But, in reality, if Ireland had thrown its lot in with the anglosphere it would have amounted, in effect, to a move back towards the UK’s orbit.

Therefore, when the Brexit vote happened, Ireland’s key choice was between Birmingham or Brussels rather than Boston or Berlin, that is our relationship with the UK or our relationship with the EU. Brussels won. The option of being an equal member state of a 27-country EU was infinitely more appealing rather than the prospect of facing the future as an appendage of the UK or as a small state at the mercy of Trump’s America and a Brexiteer-run UK.

Though this choice seems obvious in retrospect, that should not obscure what a fundamental change it involves. Despite a century of independence, deep ties remain between Ireland and the UK. A shared language allows Irish people to consume vast amounts of UK media leaving Irish people highly familiar with British culture and politics. Most Irish people could name a string of British soap operas and politicians but would struggle to name a single French television show or any French politician below the rank of president Macron.

Politically and legally, ties are similarly deep. With a shared common law system and a smaller population to generate legal precedents, Irish courts regularly rely on English cases in their rulings. The basic model for most Irish administrative structures be it the courts, the civil service or the regulation of professions, is the British model, albeit sometimes with an Irish twist.

Of course, pre-Brexit, EU membership had already transformed the Ireland-UK relationship. Instead of always meeting UK civil servants as the smaller party in bilateral encounters, Irish civil servants grew accustomed to working daily with their UK counterparts in the context of multilateral cooperation between EU members.

But there were limits to this change which are now in question. Because both Ireland and the UK have been member states, membership of the Union has not yet disrupted the tendency of Irish legal and administrative structures to closely follow British models.

Legally, the case law of the European Court of Justice requires that the whole of national law be interpreted in the light of the requirements of EU law. With the UK outside of the Union, British law will be subject to significantly different interpretative influences from Irish law. Irish courts may still often look to English case law but they will be less certain that the rulings of English judges will be a good fit for Irish circumstances.

The same will be true of broader administrative structures. Post-Brexit, the gap between Irish and British regulatory standards will inevitably grow and it will become ever more difficult for Irish bodies to consider cutting and pasting British ways of doing things as their default option. This could potentially affect areas such as regulation of professions like law, accounting and medicine, where links to the UK have remained strong.

The cultural impact of this is hard to predict. No doubt Irish people will continue to watch large amounts of British TV and to follow British popular culture but our legal and political worlds will become more distinct. Issues like the rule of law in Hungary and Poland or the EU budget will be spectator sports for the UK but of vital importance for Ireland.

With Brexit finally becoming a legal reality, 2021 may see an interesting bifurcation where in matters of culture and media, Ireland remains closer to Birmingham than Brussels but in matters of law and politics, we drift further and further from our previous proximity to the UK. Though he may well have welcomed this, it is probably not what Douglas Hyde was thinking of when he argued in 1892 for the ‘de-anglicising the Irish nation’!