Brexit backstop could save Britain from the Conservatives 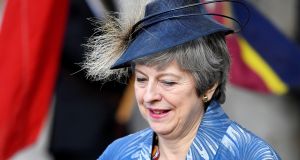 Mrs May’s own premiership is effectively over even if she lingers in office a little longer. For months, she has been less a leader than a convener. REUTERS/Toby Melville

Theresa May might not see it this way but there is reason to thank Michel Barnier for the hated Irish backstop that now threatens to destroy the prime minister’s Brexit deal. The EU chief negotiator’s backstop not only saves the island of Ireland from a hard internal border. It may also protect Britain from the Conservative party.

Under the terms of the backstop, if a frictionless border between the Republic and Northern Ireland is not secured in the next round of negotiations, then the UK is bound into an inescapable customs union (and Northern Ireland into aspects of the single market) with the EU until such time as all sides agree it is no longer necessary. It is, in many respects, an outrage that may well lead a future government to break an international treaty. But the happy side-effect is that it limits the ability of a future Tory government to do even more damage to the British economy. However bad the next stage gets, the backstop puts a floor on the disruption.

This matters because the saga of Brexit has, from the start, been a crisis of the Conservative party. The route to Brexit has marked, at every stage, the party’s path from being economic rationalists and upholders of the existing order back to the narrow economic and political nationalism that helped destroy it in the 1840s and again in the early 1900s. The Tories have been most successful when keeping a balance between these two poles. Now the narrow nationalists are taking over.

Initially, the crisis was containable - at first because the Conservative leadership protected the country from its hardliners and then because Tony Blair’s Labour government kept them from power. But the Brexit referendum and Mrs May’s leadership have brought the party close to the final surrender. Having ceded ground to secure the premiership, it is only lately that she has tried to restrain the zealots.

The politics of Brexit has been a story of the Conservative party. Nearly three years after the referendum, the tussles with Brussels remain almost a sideshow. For all that time, the prime minister’s real negotiations have been with her own party. With just 18 days to go (18 days! I have planned drinks with friends that had more certainty this far in advance), Mrs May is still negotiating with her party on how to resolve the biggest constitutional and economic change to hit the UK in modern history. The country watches on helplessly like a guest at the outbreak of a marital row.

Mrs May’s own premiership is effectively over even if she lingers in office a little longer. For months, she has been less a leader than a convener. Now she is not even that. The country needs a prime minister who can negotiate across parliament and find a common position. Mrs May cannot negotiate across her own cabinet. The only thing that keeps her in place is the conviction that it is possible for things to get worse.

Nonetheless, we are probably into her final weeks and all the likely successors - even the “compromise candidates” like Jeremy Hunt, the foreign secretary - herald a tighter grip for the hardliners. The government is falling into the hands of those who claim to “speak for the people”. These so-called supporters of parliamentary democracy, the Catiline conservatives, use their voice to whip up a mob, against which they then proclaim themselves the only bulwark. Brexit is only what they say it is. They alone are the voice of the 17.4m.

The Conservative party has been captured by demagogues, economic illiterates, provincial nationalists and wild-eyed free marketeers. Power is passing to those who think diplomacy means shouting at foreigners. Their revolution is every bit as fervid as Jeremy Corbyn’s on the left. Personally cushioned from the economic impact, they admit they would see GDP fall as the price of “freedom”. The UK’s economy will always be second to their ideological fixations. Only a lengthy spell out of office will restore the Tory equilibrium.

It is understandable that those seeking a second referendum or a softer Brexit balk at backing Mrs May’s plan. They should still see the value of the backstop. Other Brexit options, including the Norway route of single market membership, or a customs union cannot at this stage be reached without it. More importantly, a future government is limited in the further economic damage it can do in the name of nationalism.

And so, outrageous infringement to sovereignty that it is, we should be grateful for the backstop. If this deal ever passes, we may one day build statues to Mr Barnier. He will not only have saved Ireland from a hard border and Britain from the Tory zealots. He may ultimately have saved the Conservatives from themselves.

Robert Shrimsley is a columnist with the Financial Times

1 ‘When I look at the viral loads we find in elderly people, it is mind boggling’
2 Chief medical officer urges people not to visit hardware stores
3 Impact of coronavirus ‘overwhelming’ in Republic but for public-health controls
4 Coronavirus: Ryanair suspends refunds and offers passengers vouchers instead
5 Eurobonds set aside as finance ministers broker compromise
Real news has value SUBSCRIBE