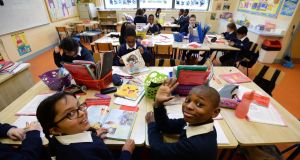 Again and again, research has shown that denominational schools are far more likely to contain minorities such as travellers or immigrant children, and to welcome them. Photograph: Dara Mac Donaill / The Irish Times

An American company designs survival capsules, that is, reinforced pods to protect people from natural disasters like tsunamis. They are built to high-tech specifications by aerospace engineers. But Labour, facing an electoral tsunami, don’t bother with all that high-tech stuff when building their own survival capsule. They just take a pop at the Catholic Church, and eagerly wait to see if their diminishing number of voters like them any better.

Minister Jan O’Sullivan has decided to dispense with rule 68 of the Rules for Primary Schools, a rule that bothers only the chattering classes who are Labour’s last, if slim, chance of survival.

Rule 68 says that a “religious spirit should inform and vivify the whole work of the school”. To delete rather than to amend this rule in a way that protects the ethos of faith schools is simply petulant.

It is more than likely a symbolic response by the Minister to Fine Gael’s refusal to buy her School Admissions Bill, which was sailing close to the wind in constitutional terms by trespassing on the autonomy of schools.

The language of rule 68 is dated, but there was no rush to delete rule 130, which still reads: “Corporal punishment should only be administered in cases of severe misbehaviour, and should not be administered for mere failure at lessons.”

Or what about the fact that cookery, laundry and needlework are mandated for girls, but not boys?

The Rules for Primary Schools need updating and consolidation, but it would be a mammoth task no party wants to attempt, because the document grew from numerous circulars, some of which now contradict the Education Acts.

When Labour talks about inclusion, what it actually means is pandering to a vocal, if tiny, minority, who don’t protest much about decades of underfunding, or cuts to educational funding for minorities like Travellers. They don’t dance up and down about the chronic mismanagement that failed utterly to plan for a long-predicted bulge in the schoolgoing population, so that there are simply not enough school places in urban areas. No, they focus on faith-based schools.

However, there are cases where the Catholic Church has handed over schools, and no new patron has been appointed.

There is a former Catholic school in Greenhills lying idle and empty, which could serve those in the Walkinstown, Terenure and Greenhills area who want an alternative to Catholic education.

There is a similar situation in Arklow. It is not the Catholic Church that is delaying change.

The Irish Catholic reported recently that O’Sullivan responded to Colm Keaveney TD, who asked about the lack of new patrons, by saying that “as the matter is the subject of ongoing discussions, I am not in a position to provide any further details at this time”. Maybe because it is the State which is failing?

The vast majority of parents do not want to lose their local Catholic school. One parish priest was treated to highly intemperate language from parents at the mere suggestion.

With staggering hypocrisy, Labour politicians have opposed transfer of schools, as pointed out by Archbishop Diarmuid Martin.

O’Sullivan also said that rule 68 does not speak to “the diverse and welcoming nature of our modern school system”.

Again and again, research has shown that denominational schools are far more likely to contain minorities such as Travellers or immigrant children, and to welcome them. The Chief Inspector’s report 2010-2012 found that 96 per cent of primary schools cultivate”‘an inclusive, child-centred ethos.’

As for the Minister’s proposal to base school admissions on locality, surely somebody in Labour has seen what happens in Britain?House prices spiral in the UK in areas where schools are perceived to be better. People lie and cheat to get their children into these schools, thus blocking people who live in the area from accessing school places.

The BBC’s Panorama programme broadcast an investigation last August, called The Schools Scandal: Playing the System. An extensive infrastructure, including investigators, has had to be created to investigate fraud.

Aside from the fact that the parish boundary ran right down the middle of streets, people invented addresses, for example by giving house numbers that did not exist, or pretending to live at relatives’ or friends’ addresses.

Far from solving a problem, it led to a raft of new ones. The real solution would be to provide enough school places.

Transferring patronage of some schools is essential, in order to honour parents’ rights as the primary educators of their children.

But seeking to build a new monolithic education system, this time a secular one, does not promote diversity. It diminishes it. But why let that bother you, when you need to build a survival capsule?