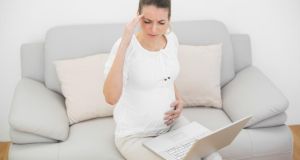 ‘The news that the child you are carrying may not make it to birth, or will only live for a short time, perhaps only hours, days, weeks, months, or in rare cases, years, splinters parents’ hearts.’ Photograph: Getty Images

Hospice is a beautiful word for a beautiful concept. It touches and supports families at their time of greatest need, and does so with discretion and dignity.

The hospice movement is highly regarded in Ireland. But just like virtually every other vital service, it is under-funded, and in some areas, does not exist at all.

For example, there is only one children’s hospice, LauraLynn, but it has to constantly battle for funding. But one form of hospice does not exist formally at all in Ireland, even though there is a great need for it.

In other countries, when a couple hears the shattering news that the baby they are expecting has a life-limiting condition, they will be offered the services of perinatal hospice, which will wrap them around with care at a time of devastation.

It is one of the least expensive forms of hospice, because it is more a mind-set than a place. It fits perfectly with the idea of hospice-friendly hospitals, and could be operated in any maternity hospital.

The news that the child you are carrying may not make it to birth, or will only live for a short time, perhaps only hours, days, weeks, months, or in rare cases, years, splinters parents’ hearts.

I have never faced this situation, but I have friends who have received this crushing blow. The first human reaction is that it is impossible to cope, and who could blame anyone for that?

That is where perinatal hospice comes in. It means you have a dedicated medical team that you see all the time, so that you don’t have to keep explaining the tragedy over and over.

You will not be queuing with all the other mothers who have every expectation of having a healthy child. And when it comes to the time for the baby to be born, you will be in a private space, with a known and trusted medical team.

There is a moving video produced by the American Perinatal Hospice foundation because of the generosity of a grieving family, the Warners.

Baby Erin Warner was born as a tiny baby at 34 weeks. Her dad still got to cut her cord. Memories were recorded by a professional photographer, who managed to capture not only very real grief, but also love and beauty. The staff were guided by the parents’ needs. Time for the parents was respected, and there was no sense of rush. Her grandparents got to hold and kiss Erin. She was bathed and dressed. Erin died in loving arms, surrounded by everyone who most cared for her.

As the video says, the most important thing about perinatal hospice is that a safe space was created “for parents to parent, and to take the first tiny steps towards healing”.

Contrast that with the experience of Mandy, mother of Muireann, as recounted in the website of Every Life Counts, a support group for parents. All she heard were the cruel words, “incompatible with life”.

She, and other bereaved parents, have had to listen to language like that for days on end this week, as the “right” to end the life of these babies was presented as some kind of compassion. Baby Muireann, a beautiful little girl, lived for six weeks, six weeks that opened the hearts of everyone who met her.

No one can predict with accuracy whether babies with life-limiting conditions will die before or at birth, or whether they will live far longer.

Kathleen Rose Harkin is eight years old, despite having Trisomy 13. Elaine Fagan lived to be 25 despite having Edwards’ syndrome. Both these conditions are often described by that ugly and discriminatory term, fatal foetal abnormality.

The vast majority of Irish parents who receive a terrifying prognosis for their babies proceed with the pregnancy. Some receive exquisitely sensitive treatment, almost the equivalent of perinatal hospice. Others are told to go away and decide whether they want a late term termination – all in the name of compassion.

Compassion is not giving shocked and reeling parents the impression that their child’s short life is so worthless that it is best to end it even earlier.

Compassion is wraparound care, delivered with kindness, professionalism and dignity. Other countries provide perinatal hospice. It is about time we did, too.