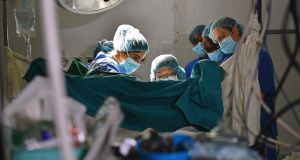 A patient undergoing surgery in Nairobi Kenya. Research shows that surgeons who have undergone their specialist training in the East, Central and Southern Africa region overwhelmingly stay and practice in their home country.

In some parts of the region the ratio is a million people to one surgeon. Most of the surgeons are based in cities so vast areas of these countries therefore have no access to surgery at all. Looking at surgical specialities the problem is striking; for example there is just one paediatric surgeon per 7 million people in the region.

The results are often devastating. What are seen in the developed world as very routine illnesses and accidents which need minor low-tech surgery often turn into life-threatening and life-ending episodes.

- Broken limbs can lead to death through infection, or permanent disability

- Appendicitis can cause death

There are many more examples. These are not just personal tragedies for the individual: Many of these unnecessary deaths and disabilities, particularly of the main breadwinner, and throw an entire family into poverty.

These countries badly need more trained surgeons who will remain in their countries and work where they are needed. For the past ten years, the Royal College of Surgeons in Ireland (RCSI) has been working with the College of Surgeons of East, Central and Southern Africa (COSECSA) to help it train specialist surgeons.

This unique partnership both trains surgeons and those who train the surgeons. It provides an exam system to an appropriate standard and allocates resources and lobbying skills to follow up with Governments and local authorities to ensure they deliver on commitments.

There are some good results. More trainees are enrolling in surgical training than ever before in the region. However the problem remains vast, and a long-term commitment in all of these countries with the support of organisations such as COSECSA and RCSI is essential.

This week, as more than 1,000 delegates from all corners of the world converge on Dublin for the World Health Organisation’s Human Resources in Global Health Forum, the RCSI/COSECSA partnership is celebrating two important milestones.

The 250th COSECSA graduate will collect their parchment at a ceremony in Mozambique next month. Uniquely, these graduates will not have had to travel to Europe or elsewhere to access specialist surgical training; in a region where hospitals can scarcely afford to let badly-needed doctors leave their posts for higher surgical training, locally-based training programmes are vital. Having not emigrated for training, these surgeons are very likely to stay and practice in their region after graduation.

The second milestone is that by the end of 2017, COSECSA will actually have more surgical trainees enrolled in its programme than RCSI has. This rapid scale-up has only been possible through a partnership built on mutual trust, where the development goals are determined and owned locally.

This partnership is supported by the Irish people, through the Irish state’s international development arm, Irish Aid, and it has had a huge impact. The projected number of trainees and graduates represents a massive contribution to increasing surgical capacity. COSECSA is now the largest single contributor to the surgical workforce in the region.

Once trained, surgeons must be retained in the sub-Saharan region if they are to have a real impact on saving lives and preventing disability in the region. There has long been a common perception that skilled health workers from lower income countries emigrate to higher-income countries, a phenomenon known as “brain drain.” However, research shows that surgeons who have undergone their specialist training in the East, Central and Southern Africa region overwhelmingly stay and practice in their home country.

COSECSA-trained surgeons perform on average between 300-400 major surgeries a year, often in regional or district level hospitals. They also in turn become trainers for the next generation of surgeons, thus exponentially increasing their impact on surgery in the region.

We have seen the impact that this unique partnership between our two colleges has had on improving surgical care in the region and on the growing academic field of global surgery. Despite the many challenges of resources and infrastructure, surgeons can be trained and retained in a very cost-effective manner. We now call on government delegations and international funding organisations meeting in Dublin this week to support and expand the proven model of local, indigenous training for surgeons. We furthermore call on international organisations active in the global surgical training field to work in partnership with local institutions to ensure sustainable impact.