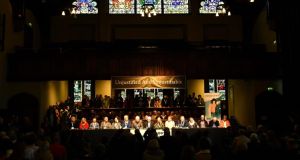 The families of Bloody Sunday victims at a press conference in Derry Guildhall following the announcement that one British soldier was to be charged in relation to the Bloody Sunday shootings.

People still talk of the silence that fell over the city on the night and on the days that followed Bloody Sunday. A hush – a shared feeling that words, even quiet talk, would sound like clatter.

The only comfort was to move from house to house and sit quietly by the coffins of those who had been shot dead.

That hush lasted as the 13 coffins were lined up side by side in the church that overlooked the city and then parted as each family carried their dead to their place of rest.

In the days after Bloody Sunday hundreds of men and women, maybe thousands, made quiet resolutions to themselves that they would do whatever and as much as they could to ensure that those who were shot dead would get some form of justice.

There was a resolve that the world would know that these were completely innocent people who were shot down in cold blood while walking and protesting on their own streets.

That those in authority who decided to put paratroopers, famous for only ever shooting to kill, and the soldiers themselves who willingly pulled the trigger, would somehow and someday be charged with the murders they had committed in broad daylight.

For 40 years or more those people had attended the short prayer service that took place on the morning of each anniversary. Or they had joined every march that followed the original route on the afternoon of every January 30th.

If they were in other parts of Ireland, or indeed in other parts of the world, they kept an ear to the happenings and to the families of Bloody Sunday. They quietly wished well to those families and hoped for a righting of the wrongs done on that awful day.

All those people shed a tear or more on the day the Saville tribunal proclaimed the dead and injured of Bloody Sunday to be innocent and posing no threat to the people who killed them.

On that day most of those people felt that their quiet resolution had been discharged. The talk of charging and jailing soldiers was a matter they would leave to the families themselves and to those who knew about things like that.

The families had the same reaction. All of them viewed the Saville report as cathartic – but not all saw it as the final resolution.

Some considered it an important step in achieving the prosecution of the soldier who killed their loved one, others as the resolution they desired, while still others considered the possibility of murder charges against soldiers as being unlikely because of the time gap and with the sparsity of forensic evidence taken on the day.

It is also reflective of the feelings of civic society where a growing number think that enough attention has been given to the past and that it is time to draw a line.

All of that was present in Derry’s Guildhall as the families left a meeting with the public prosecutor and made their way to the great hall where the public and the media awaited their reaction. There is still some of that original hush in the air when the families of those killed come together in reaction to the latest episode in the long aftermath of that infamous day. There was some of it in the Guildhall on Thursday.

The expectation had mounted that at least three and possibly four soldiers would be charged with murder.

Among themselves the media had moved their expectation to the next stage in the saga – how three or four prosecutions of former paratroopers would create an uproar across the water in Westminster where the Conservative party was already talking of changing the law so as to ensure that former soldiers would be free from prosecution.

As has been their wont, the families held together, not hiding their disappointment that only soldier F would be charged with two murders and four attempted murders.

All were glad that a few families would have their day in court, some were “devastated” that their dead were not to receive the justice they deserved, others were annoyed but not surprised. Some would fight on, others expressed a weariness that it was too long and time to give up. Emotions were high but always dignified.

It was too early to speak it, but the knowledge was in the room. The decision not to prosecute the bulk of the soldiers was significant not just for the families of Bloody Sunday but for every family who still has an understandable desire to see someone prosecuted for causing or contributing to their relative’s death.

The public prosecution office had affirmed that it was near impossible to expect a conviction in most legacy cases.

With the lapse of time, it is increasingly difficult to find new evidence or substantiate old evidence.

He had just told the Bloody Sunday families that the evidence given at the Saville inquiry was not admissible because of the guarantee that any such evidence could not be used against the person in a court of law.

The evidence he was restricted to was that gathered by the police in the past number of years and they were collecting evidence about something that happened 45 years ago and which had not been investigated at the time.

Out of that police investigation he was recommending the charging of soldier F with two murders and four attempted murders. He also revealed that there was a strong possibility that some soldiers would be charged with perjury.

If this society ever gets to a stage where we address the legacy of the past in a way that is both comprehensive and compassionate, one of the most sensitive and important roles will be to inform families that while they will have the right to keep the possibility of prosecution alive, they will also have to face the reality that the likelihood of any of those historical cases making it into a court of law will be decreasing with every year that passes.