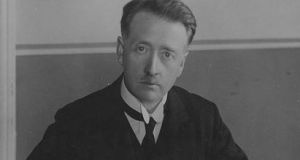 WT Cosgrave: he was an instinctively conservative figure trying to make good on the impractical dreams of a revolution while operating within the practical constraints of reality. Photograph: Getty Images

At the bottom of the famous stairs in Downing Street – the ones that made the Taoiseach gush earlier this year – next to a globe in French that François Mitterrand gave to Margaret Thatcher, is a family photo taken at the 1926 Imperial Conference. It is a formal portrait of assembled ministers of the crown from dominions, such as Australia and Canada, that were not yet fully independent states.

In the front row sits WT Cosgrave, then president of the executive council of the Irish Free State, another one of the king’s dominions. In the row behind him is Kevin O’Higgins, his deputy. The photograph is a relic of that sliver of history, after the Civil War but before the first Fianna Fáil government of 1932, when the Irish State had won a form of separation, albeit on a partitioned island, but still operated within the ambit of the British empire.

A decade before the summit Cosgrave was sentenced to death for his part in a rising aimed at winning an Irish republic. By 1926 he was meeting King George V as one of his heads of government. Those were, after all, the terms of the 1920 Anglo-Irish treaty which Cosgrave was pledged to uphold.

I don’t know whether Theresa May is aware of Cosgrave’s predicament – it never came up when I worked there – but she can probably empathise. She too is bound by the terms of an Anglo-Irish treaty which she did not sign but which limits her freedom of action.

In her case it is the Belfast Agreement. This document was commonly understood in Britain as a means of pacifying Northern Ireland’s warring tribes. In 2008, 10 years after the agreement, then shadow Northern Ireland secretary and now Brexit-ultra Owen Paterson said it “served a vital purpose in getting bitter opponents to work together”.

Lots of people understand why the Belfast Agreement is important. What is less understood, particularly on the right of British politics, is how it works.

For a start it binds Britain to something bigger than simply refereeing the Sharks and the Jets in the North. It was the culmination of an approach to conflict resolution which deliberately, but subtly, smudged the boundaries of nation states. In that way it was European in nature.

It created treaty obligations on both Britain and Ireland to uphold, for example, Northern Ireland’s have-cake-eat-cake citizenship rules and, most distressingly for harder Brexiteers, it codified areas of North-South co-operation that cannot plausibly continue with entirely alien economic and regulatory models on different parts of the island.

Many parliamentary sovereigntists disliked the Belfast Agreement, but they could console themselves that Jesuitical formulations about the “totality of relationships in these islands” were cover for the blunt truth that Ireland was still partitioned, and would remain so until the majority in Northern Ireland wished it to be otherwise.

But that consolation must now feel cold. Because in the cruellest of ironies, those Jesuitical curlicues, and that European hint of smudged sovereignty, form part of the institution that Brexit was supposed to restore to glorious primacy: Britain’s diffuse and uncodified constitution.

And what is more the Irish Government has made clear that it will use the Brexit process as an enforcement mechanism for the terms of the 1998 agreement.

Not only that, last week’s joint report from the European Commission and UK negotiators included expansive commitments. The supposed backstop option – the now-infamous “full regulatory alignment” option – applies to rules “now or in the future” which support “the all-island economy”.

Some of this chimes with what the UK was committed to anyway. Its position paper on Ireland, published in August, said it would uphold the Belfast Agreement “as a whole and in all its parts”.

But here we get to the fiendish heart of the problem. In order to agree on the parts that need to be assembled, you need to agree on what the whole looks like.

Is it a settlement aimed at containing Northern Ireland’s perennial feud within the UK but with a consultative role for the Republic and a few statutory rights for the minority?

Or is it a text which expands and contracts to fit the necessary space in the mind of whoever is reading it, allowing both the United Kingdom and the “Irish nation” to exist in the territory of Northern Ireland?

The clear implication of last week’s agreement is that it is the latter – and that any regulatory or economic divergence that disrupts that spirit will be a problem.

This definition of the Belfast Agreement’s purpose, and the eventual settlement it suggests, sits in direct contradiction to the sovereigntist version of Brexit promulgated by many in the cabinet and on the Conservative backbenches.

In 1926 the declaration Cosgrave and others signed at the imperial conference stated that dominions, including the Irish Free State, were autonomous communities within the British empire, and not subordinate to the United Kingdom. But this was not enough for those who felt the sacrifice of Easter 1916 demanded the fullest possible realisation of Irish national sovereignty.

Cosgrave, like Theresa May today, was an instinctively conservative figure trying to make good on the impractical dreams of a revolution while operating within the practical constraints of reality.

In case she needs inspiration, his image is conveniently nestled in the heart of Downing Street, less than 10 seconds away from her desk.

Much like the Belfast Agreement, an Irish contradiction nestled in the heart of the British constitution, and is threatening to undermine Brexit from the inside out.

Matthew O’Toole was chief press officer for Europe and economic affairs in the British prime minister’s office from September 2015 to August 2017. He now works for Powerscourt Communications

A street united in a spirit of ‘Covidliness’
Waterford’s low Covid-19 infection rate
Thou shalt not knit at Level 5
The rationale for Level 5 lockdown
Churches and the common good
Stories of illicit distilling
Time to disband the Defence Forces?
Electric bicycles and the law
Shared islands and ‘the Isles of Man’
Revealing mother and baby home records

1 Children found dead in their Dublin home were murdered
2 Young homeless mother may have been dead in tent for a number of days
3 The real Contagion virus is out there and it’s causing virologists to worry
4 Six within 60: homes to buy within an hour of the M50
5 Aldi, Lidl bow to pressure to ban non-essential ‘middle aisle’ sales
Real news has value SUBSCRIBE