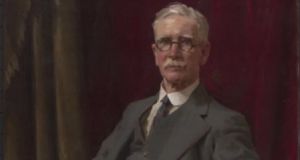 Portrait of Bernard O’Dowd by Will Rowell (circa 1930). The National Library of Australia

Bernard O’Dowd was Australia’s first national poet. This son of Catholic immigrants from Ulster was born in Australia in 1866. Described as “a radical writer”, O’Dowd is credited with transforming Australian poetry from one which espoused “bush ballads” to one which had a more philosophical foundation.

An historian said that he was “one of the leading radical intellectuals and thinkers of his day”.

He was educated at state schools in Ballarat, the town which owed its notoriety and wealth to the gold-rush of the 1850s. He became a teacher at St Alipius Catholic School in Ballarat. However, O’Dowd proved to be too radical for the school authorities and they parted ways. He was branded a heretic.

He founded his own school in his hometown of Beaufort, Victoria, before moving to the city of Melbourne.

There, he took the public service examination and worked in the crown solicitor’s office. He attended university as an external student (studying logic and philosophy) and went on to work as a librarian in the Supreme Court Library. He remained there until his retirement in 1935, having achieved the rank of chief parliamentary draughtsman.

While he may have worked as a lawyer to earn his living, poetry was O’Dowd’s true vocation. He thought that poetry should engage with controversial issues and he believed in the power of verse to convey messages for the betterment of society.

In his pamphlet, Poetry Militant, O’Dowd said that the poet “is a ferment who alters for the better the ordered, natural, inert sequence of things. He is a living catalyst in the intellectual laboratory, and does in a moment what in the regular order would take us an age to do”.

O’Dowd was introduced to the poetry of America’s poet and essayist Walt Whitman by a journalist in Ballarat. He corresponded with Whitman for several years before Whitman’s death in 1892. In O’Dowd’s first letter to the poet, who was known as the “bard of democracy”, he addressed him as follows: “Dear Walt, my beloved master, my friend, my bard, my prophet and apostle”.

A true devotee, O’Dowd said in the letter that his “mates all send their love” and that they had cut out a picture of Whitman from the London Illustrated News and hung it in pride of place over the mantelpiece. O’Dowd’s confidence in his own writing was, no doubt, bolstered by the letters of encouragement he received back from the celebrated lyricist on the other side of the Pacific Ocean.

O’Dowd gave talks to audiences in Australia about Whitman’s poetry, trying to make it better known and better understood. He even named one of his sons Eric Whitman O’Dowd in honour of the man who he looked upon as a mentor. The bonds of friendship and mutual affection between the two poets are evident from their correspondence.

Describing himself as “a lowly law clerk”, O’Dowd valued the words of wisdom the old poet transmitted to him through the post. “You are our guide, philosopher and friend”, O’Dowd wrote, and he had a purpose-built wooden cabinet constructed to hold his correspondence with Whitman. The Whitman Cabinet, as it is known, is now housed in the State Library of Victoria, where it is referred to as “one of the most treasured objects” in the library.

Apart from poetry, O’Dowd’s other interests included Theosophy, journalism, and political activism. He founded and co-edited the radical weekly Tocsin, a labour newspaper which focused on the Australian constitution and federation, as well as workers’ rights and conditions.

From around the year 1900, he was a lecturer in the Victorian Socialist League. In 1905, he was a founder member of the Victorian Socialist Party and later founded the Essendon Socialist Group. How O’Dowd was able to balance his radical political beliefs with his legal career at the heart of Australian democracy is extraordinary. Perhaps his poetry afforded him an outlet to vent his frustrations.

Opposed to the federation of Australia, he wrote a poem, The Bush, in 1912 about his feelings on the matter and also asked the question, “Does Australia have a soul?”. He won the Dublin Prize from the University of Melbourne in 1913 for the poem.

The prize was created in 1892 after a fund was established to commemorate the tercentenary of Trinity College Dublin. It was awarded to a student or ex-student of the University of Melbourne who made the most important original contribution to literature, science or art in the preceding year.

From the 1920s, his poetry was prescribed for school children across Australia. However, within his own lifetime, O’Dowd’s reputation fell out of favour and his poetry came to be seen by critics as old fashioned.

Nevertheless, he did play a part in modernising Australian poetry and laid the foundations for the work of a future generations of poets,

1 Late Late Toy Show: Music, tears, Tubridy’s F-bomb and €5m for charity. What a night!
2 Ireland’s teenage pariahs: ‘We are really at breaking point now’
3 Astronaut Chris Hadfield offers to ‘talk space’ with Adam from the Toy Show
4 One man dies, five injured after partial building collapse in Tralee
5 'It just doesn’t feel safe': The restaurants that will not reopen in 2020
Real news has value SUBSCRIBE