Appliance of science – the shortcomings of domestic objects 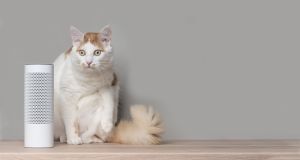 “If you have any sort of an accent, smart assistants can struggle to accept your commands. Kerry people may know more about that.” Photograph: Getty Images

When you find yourself having murderous thoughts about your household appliances, then you know that this Covid lockdown is getting to you.

More time at home means more time to observe the shortcomings of objects around you. And our vacuum cleaner is not coming out of this audit well. Instead of gliding around corners serenely, it dramatically hurls itself on one side in protest when asked to go through a doorway. It takes kamikaze leaps off the stairs and its ability to retract its cord depends on who is asking. Because it loathes me, it always refuses to suck up its cord when I ask.

This may be deliberate, and it may have its own murderous plan to trip me up.

But it’s not just the vacuum cleaner. We have a recalcitrant microwave which fails to sufficiently heat something in two minutes but add another 10 seconds and the food temperature makes molten lava feel lukewarm.

We have a malevolent house alarm which senses when we are in a particular rush leaving the house and decides to say that a window is open. Of course, we find that it remains as tightly shut as the entrance to Fort Knox after we trudge upstairs to check.

And the washing machine is a diva of household appliances. If you don’t close the door with the care you would give to a broken-winged butterfly, it refuses to commence its work.

The laptop is in league with these devious household appliances. In those joyful olden days when we could get on airplanes, it always chose to do an intricate one-hour update just as we decided to print out boarding tickets en route to the airport.

We don’t have a smart assistant, but some people believe they can be racist. If you have any sort of an accent, they can struggle to accept your commands. Kerry people may know more about that.

Of course, some people will say you can’t apply human emotions to household appliances or animals, but this is patently untrue. If anyone thinks dogs don’t get embarrassed, they have not seen our dog when she returns from the groomers with a jaunty bow around her neck. She slinks around the garden with a mortified look on her face, silently beseeching you to avert your gaze. Then she surreptitiously tries to remove the bow before someone takes her out of her agony by untying it. It takes at least 24 hours before she can hold her head high again and confidently stride around the garden.

And what about the crazed behaviour of a crow funeral? If you have the misfortune to have a crow drop dead in your garden, you will feel like you have been catapulted into a scene from The Birds. A murder of crows will descend to pay tribute to their fallen comrade and investigate the cause of death. They will circle accusingly and screech relentlessly while you cower inside and wonder if you should just move house.

We assign human emotions to objects and animals all the time. Just ask anyone who has a name for their car. Betsy is the most popular name for cars in the US, in case you are looking for inspiration. There is even a Name Your Car Day – October 2nd – and websites to help you pick the perfect name for your vehicle.

And then there are the people who name their guitars. Keith Richards has named many guitars, including one called Micawber after the David Copperfield character. Willie Nelson’s guitar Trigger has its own Wikipedia page and it’s so battered at this stage that a gentle wind might cause it to disintegrate. The singer bought Trigger more than 50 years ago and once said he would quit when Trigger gave up.

BB King’s reason for naming his guitar Lucille is legendary. He was performing in an Arkansas club one night when it went on fire. Everyone ran out, including BB, but upon remembering his $30 Gibson guitar, the blues man ran back in and saved it. He subsequently learned that the fire was caused by a fight over a woman called Lucille and had caused the deaths of two people. From then on, he named all his guitars Lucille as a reminder to never risk his life like that again.

And if you are looking for evidence that naming an inanimate object is a sign of intelligence, may I present Albert Einstein? He loved music and said he would have been a musician if he hadn’t been distracted by all those equations. He owned about 10 violins in his lifetime and named them all Lina.

Einstein’s quote about arrogance being the only thing more dangerous than ignorance was invoked in India by Rahul Gandhi when criticising the government’s Covid lockdown. And this brings us back to where we started, in a neat piece of symmetry which would surely have pleased the great physicist.