Anti-abortion side has grasped the importance of being well prepared 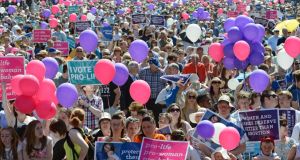 A section of the large crowd attending the anti-abortion Vigil for Life at Merrion Square, Dublin, on Saturday. Photograph: Eric Luke

The Vigil for Life in Dublin last Saturday afternoon was a blur of sunshine, high-viz vests, a scattering of Declan Ganley fliers and a lot of balloons in purple, pink and white. It was widely regarded, not least by its organisers, as an unqualified success. As the crowds turned for home you were handed a card that said “Thank You! Today was a great success, and well done for making that possible.”

Forward planning is key. The same card that declared Saturday a great success was announcing the Rally for Life, which is to be held on July 6th: “Come & see: surprise guest speakers. 100,000 pro-life pledges gathered. For the first time in Ireland: ‘Voices from the womb’!”

However, and surprisingly perhaps, despite the excellent organisation evident on Saturday, not everyone was optimistic. “ This isn’t as good as last time,” said a woman to her friend as they began to walk up one side of Merrion Square towards the Dáil. “The crowd was right down the end the last time.” But then if you go on protests it is impossible not to compare them, and to complain a little, because protests are strangely hard work.

“Don’t call it a protest,” said a garda quickly. “Or a march. It’s a vigil. They were giving out to us yesterday about what to call it. It’s a vigil.”

McAreavey video
The anti-abortion movement has learned a lot. When a recorded message from John McAreavey, the young widower of the murdered Michaela McAreavey, appeared on the screens, the first thing he said was, “We must never forget our responsibility to support women with crisis pregnancies.” Of the men also responsible for these so-called crisis pregnancies there was no discernible mention, all afternoon. The ostensible shift of emphasis to caring for, rather than castigating, the unmarried pregnant girl has created a strange anti-abortion world. On Saturday there was no mention of sex. To listen to the speeches – even the speech of Edel Best of Women Hurt [ by abortion] who, like John McAreavey, is a Northerner – and to read the literature here, you would think that there had been more than one virgin birth in history.

It was a big vigil. Whether there were 20,000 there, as the organisers claimed, is very much in doubt. Still, the crowd was substantial, almost covering two sides of Merrion Square, which was blocked to traffic, and standing in strong June sunshine. Bus driver Michael O’Brien said eight buses from his employers’ company had come from Wexford town alone – six 50-seater and two 23-seaters. “That’s a lot of people,” he added. He had driven them up for the rally in January as well.

Carmel and Peggy had come in from north Dublin. They thought Saturday’s crowd was bigger than the crowd at the rally in January. But they weren’t optimistic about their chances of stopping the legislation going through. When asked about this they looked at each other before replying. “Probably not,” they said. “I can’t understand Enda Kenny. What happened?”

A lady who would not give her name, but said that she’d come up from Tralee that morning, wasn’t optimistic either. She was silent for a moment before she shook her head at the chances of the Bill’s defeat. This was her first vigil ,“although I prayed through the other ones, to support them”.

Pledges
There were almost as many Declan Ganley fliers on the desk as “pro-life” pledges. I thought the pledge was a prayer of some kind. The young woman explained that it involved promising never to vote for Enda again if the abortion legislation goes through. “Ever,” said the young woman over the heads of the people who had come forward to sign. “Perfect,” said a woman with short hair.

Among ordinary voters, almost certainly for the first time, can now be felt the faint stirrings of sympathy with Enda Kenny. There he is, a conservative, traditional, rural Catholic, and he is ready to try and legislate on abortion. In a country that thinks in stereotypes – and not a huge range of stereotypes either – he has bewildered us all.

Postcard campaign
Walking towards the speakers’ platform, which was situated outside the National Gallery, young men and women were giving out posters and other campaign material. “ New postcards for your TDs,” they said. “New postcards for your TDs.” The white envelope contains four postcards showing a baby swaddled in white lying on a white sheet; you get four cards to a pack.

One woman took four packs and put them carefully under her the seat of her child’s buggy. “Insert politician’s name below,” says the form on the back of the postcard.

It is interesting to speculate about what abortion signifies to us all. In the same videoed message, John McAreavey went on to say that the legalising of abortion in other countries had “ unleashed a terrible sadness across their societies. Often it is a hidden sadness.” This is a truly fascinating statement.

We looked at our shoes in the summer sunshine. Then we went home.

1 Coronavirus: One case confirmed in Northern Ireland
2 Orange weather alert issued as Storm Jorge set to batter Ireland
3 Corona beer firm reeling after 8% slide due to coronavirus
4 Clonlara case study: ‘Who the hell gave planning down here, day one?’
5 Predictions of ‘skin and hair flying’ as FG selects 13 of up to 60 Seanad hopefuls
Real news has value SUBSCRIBE