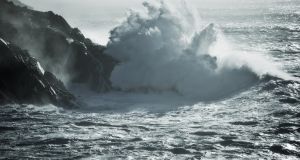 During the flooding crisis recently, talk turned to similar weather in recent years. Extreme weather seems to be a form of shared public trauma that evokes the memory of previous storms. A Freeman’s Journal account of the worst storm in Irish recorded history, the “Night of the Big Wind” of January 6th, 1839, during which the Shannon burst its banks and parts of the country experienced torrential rain, flash-floods, and salt-water showers driven miles inland, notes that it was the most “violent” weather event since the storm “in February 1802”.

Subsequent oral recollection of the event appears to have been prompted by comparable weather or simply the winter season – a National Folklore Collection account from Roscommon in 1937 noted, “During the winter nights my father often tells us of the stories he heard about the Big Wind.” Moreover, in an anticipation of trauma to be repeated, a 2015 RTÉ-BBC documentary on the 1839 storm gave much airtime to discussion of the storm of January 6th, 2014, and that event’s implications for coming extreme weather in light of global warming. Thus, when a storm is experienced, the weather trauma of the past (and of the future, increasingly, as consciousness of climate change grows) is simultaneously conjured up.

The hurricane-like storm of 1839 arrived suddenly after a strangely calm day, plunging towns into immediate darkness, which magnified the terror. Author Peter Carr notes that eddying winds caused the contents of houses to dance in the air and the din forced those huddled together to sign in order to communicate. Thousands hastily abandoned badly built and suddenly roofless houses, innumerable farm animals perished, and the Shannon flooded vast areas of the surrounding countryside.

Going eastward from the Shannon floods, one would have encountered the flooded Liffey quays in the wider spectacle of what the Dublin Evening Mail called a “sacked city” – “Houses burning , others unroofed, as if by storm of shot and shell; a few levelled with the ground, with all their furniture within; while the rattling of engines, cries of firemen, and labours of the military, present the very aspect and mimicry of real war.” FE Dixon records that 38 houses in Dublin were blown down, 364 were partly demolished or unroofed, and an astonishing 4,846 were partly unroofed.

Countrywide, the destruction encompassed the cabins of the poor, Big Houses, and Belfast factory stacks.Three hundred lives were lost on land and sea that night, and many injured victims died in the weeks that followed. Newspapers surmised that 250,000 trees were destroyed, and folklore accounts indicate that the storm further altered the landscape by prompting the building of sturdier rural housing.

The storm’s impact may be gauged by the fact that the Freeman’s Journal covered the aftermath on every day bar one between January 8th and 17th of 1839. The Dublin Evening Post editor worried that, almost a week later, he had not “as yet, however, heard anything from the exposed coast of Connemara, or from the north-western part of Mayo”.These Irish-speaking areas constituted the island’s poorest and most isolated regions, so there is a double silence to their unrecorded and unrecordable suffering. Due to a complex mix of logistical and linguistic reasons, the rural and the poor were generally left to enumerate their dead themselves, since the English-language newspapers from the principle towns concentrated on the losses of named landowners and substantial urban proprietors. Indeed, metropolitan readers of the Dublin Evening Post appeared to have become jaded with the sustained coverage of the storm’s effects in more isolated areas, for in response to readers’ complaints regarding the sameness of accounts in the week following the storm, the editor rejoined: “It is not for the purpose . . . of interesting, or still less of amusing, the reader, that we have deemed it necessary day after day, to repeat, in respect of different places, the same thing. It is . . . to put upon record . . . the extent and nature of the calamity.” That editorial marked the last such account carried by the paper.

Although a letter to the Dublin Evening Mail called the storm “the vengeance of Providence” visited upon “peer and peasant” alike, working-class victims, when enumerated in the press, were rarely individuated, while the rural poor, for whom the loss of livestock or crops would have been catastrophic, were the least likely to have had their trauma memorialised in detail in print. Despite this patchiness in coverage, and as with accounts of recent flooding, the Dublin Evening Post’s survey nevertheless suggests an island united by trauma – “every part of Ireland – every field, every town, every village in Ireland have felt [the storm’s] dire effects, from Galway to Dublin – from the Giant’s Causeway to Valentia”.