An Irishman’s Diary on the Oradour-sur-Glane massacre 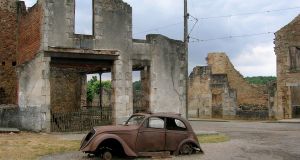 Between 160 to 200 soldiers of the Waffen SS entered the quiet village of Oradour-sur-Glane 75 years ago this month The women and children were rounded up and locked into the church while the men were machine-gunned down. The church was set alight.

Just 10 days after the D-Day landings in Normandy, on a sunny June day, between 160 to 200 soldiers of the Waffen SS Der Fuhrer regiment of the 2nd Panzer Division “Das Reich” entered the quiet village of Oradour-sur-Glane, 75 years ago this month.

The women and children were rounded up and locked into the church while the men were machine-gunned down. The church was set alight, and the soldiers shot those who tried to escape.

A total of 642 women, children and men, including a small number of Spanish refugees from Franco’s Spain, were killed. It was the worst civilian atrocity to take place in France. Survivors were few: one woman escaped from the church; a child and a few men survived the massacre. In a coup de grâce, the village was set on fire.

It was never clear why Oradour was chosen. There was Resistance activity in the area in support of the Normandy invasion, mainly in nearby Limoges and the neighbouring area of Dordogne, but not in Oradour.

One chapel has more or less survived, including the wooden confessional box, where two children hid, but were shot

But the motive became unimportant. Oradour became subject to myth, it was enough that it had suffered. In 1946, on the orders of Gen de Gaulle, the French state expropriated and preserved the entire site. The 40 acres of crumbling buildings became a “Martyred Village”, a symbol of a united France.

In 1946, the French national aseembly passed a law classifying Oradour as an historic monument, ordaining that the town be preserved, as it was, for eternity. The ruins were now “an image of France which has been ravaged”.

On the walls are printed the names of the people who occupied the town on June 10th, 1940. Down the centre of the main street are the rusted tram tracks that once ran to Limoges, about an hour away. On the village green is a car, bright orange with rust, treated to preserve it in its corroded state.

Today, peering into the burnt-out houses, the bakery, the tobacconist, the cafes, you see the iron beds, the sewing machines, the pots and the pans, as they were that fateful day.

In the burnt-out church, where the woman and children were killed, a guide narrates the events. One chapel has more or less survived, including the wooden confessional box, where two children hid, but were shot. Signs ask you to be silent and to “souviens-toi”, to remember.

For de Gaulle, Oradour represented the quintessential French village, unchanging, and connected to the past. For him the village was a symbol of what had happened to France. A blameless place ripped from its past and from its future.

The first World War was commemorated with monuments in every French village and town.

The second World War was commemorated differently, because civilians were impacted much more. Places were deemed to be near-sacred – the concentration camps, but also the Normandy beaches, Lidice in the Czech Republic, and villages such as Oradour.

The memorialisation of Oradour was intended to unite the people of France. You might have been a member of the Resistance, a socialist, a communist or a supporter of Vichy, but ultimately, your allegiance meant nothing, as Oradour showed. If you were French, regardless of your politics, or wartime activity, you were in danger, simply for being French.

The Oradour intention, to unite a disunited country and help it come to terms with the war, did not happen.

The few survivors, and the families of those who died, continued to seek justice. In 1953, a trial finally took place of 66 former SS soldiers who could be identified.

France has more or less come to terms with its wartime experience. Today the village has an air of nostalgia rather than menace or violence

Unfortunately 14 were French, from Alsace. The Alsace media protested, politicians objected. Alsace was exceptional. Its experience of war was not like that of other parts of France. It was subsumed into Germany, and its men forced to serve in the German army. Eventually there was an amnesty.

The people of Oradour, who had now moved into a new village, returned the Croix de Guerre and the Croix de Légion d’Honneur, in protest. There is but one survivor left, Robert Hébras.

Freezing a moment is a complex and expensive business. Nothing stands still, even a ruined village. At first it was about cutting back the vegetation. Now one sees contemporary building materials hold up walls that would otherwise, due to time, have collapsed. The village looks more benign now than then. The black scorch marks have long washed away. The sharp edges of a recently destroyed building have been softened and rounded over the years.

France has more or less come to terms with its wartime experience. Today the village has an air of nostalgia rather than menace or violence.

Oradour is now part of the tourism industry. You can take a detour on a journey to the Dordogne, Bordeaux or towards the beaches of southwest France. On Tripadvisor, where the village attracts a number of “terribles” (mainly for not allowing dogs), and a number of “poors”, often from people who know nothing, but find the interpretive centre “inadequate”.

Had Oradour survived, it would doubtless be home to English and Irish expats, as so many villages further south in France are today.