Why did Griffith not participate in the Rising? 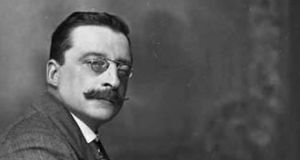 Arthur Griffith, founder of the original Sinn Féin, was absent from the 1916 Rising. Why? There’s one simple reason.

Did he disapprove of the revolt? Was he held back by its leaders to keep the national movement alive through his journalism? Historians argue those points.

But what is certain is that he was extremely short-sighted. Given a gun he would have been a danger to friend as well as foe.

One of his old pals revealed how bad Griffith’s sight was. James Moran’s account, in the National Library, recalls a dip in Blackrock baths in the 1890s. Griffith liked to swim as close to daily as possible.

One day, as he and his friends swam, “a very powerful shower of rain came down”. Moran writes, “We made for the dressing boxes for cover, but noticed that Griffith remained in the water, and was swimming in circles. Showing off was a thing he was never known to practise, so we shouted at him to come in.”

Immediately Griffith swam towards them, and they found him exhausted.

They helped to dry and dress him before making for the nearest pub, “where after a drop of good whiskey he was himself again”.

Moran says Griffith explained that, “When the shower came down it splashed the water into his eyes, and his sight, always a little weak, became blurred. He couldn’t see what direction he was swimming in, but he gave no sign he was in distress. A most remarkable man!”

George Lyons too recalled that Griffith was shortsighted: “he often confessed to me that he never knew who a person was until he heard their voice”. And Seumas O’Sullivan described climbing the narrow stairs of an old house where Griffith produced his influential journalism: the editor “sat at a little table, a small, stocky man, his short-sighted eyes peering from behind thick glasses”.

Griffith may have been short, but he was strong and energetic. His eyesight did not deter him from cycling around Dublin. He organised verse-writing and handball tournaments in Reading Gaol, where he was interned in 1916 despite taking no part in the Rising.

Griffith in jail even tried playing handball himself. Peter MacSweeney of Loughrea was excellent at it, wrote Padraic Colum, but he “had such a reverence for Griffith that he could hardly bear to beat him at the game”.

So MacSweeney would place the ball where Griffith could hardly fail to hit it. Colum adds, “Judging by his thick glasses his eyes were not up to the game, and he probably saw the ball an inch or two away from where it actually was so he missed comparatively easy strokes.”

Short-sightedness helps to explain Griffith’s reserve, about which many commented. If he did not recognise figures he might stay quiet until he could otherwise identify them. This gave rise to a misunderstanding in the Bailey.

The Bailey was his favourite pub and he often went there with close friends such as his solicitor Michael Noyk, a life councillor of the Dublin Hebrew Congregation. One evening Griffith stood drinking with other patrons when Eddie Lippman, a young doctor on leave from the Great War joined them in uniform. Griffith did not give him a look of recognition.

Lippman told one of the group that he had wanted to chat with Griffith but understood Griffith’s demeanour as coolness towards the uniform. So he left. When Griffith heard of this a moment later he dashed off to find Lippman, and stood talking with him in College Green.

A man with Griffith’s eyesight would have been little use as a fighter in 1916.

Besides, his widow later told the Bureau of Military History that he was “against all that”, and that Seán MacDermott broke a promise to him that a revolt would never start without Griffith’s knowledge.

It is the case that Griffith was not as militant as some other advanced nationalists, believing that armed revolt could be counter-productive and hurt the poor.

That did not save him from being roughed up along with his son and threatened with execution in 1916. And he never disavowed those who went out in Easter Week.

Widely read and intelligent, Griffith distrusted ideologues. He collapsed during the Civil War in 1922, dying aged 50. No diary or memoir survives. His exact relationship with the rebels in Easter Week, and his precise strategy on other crucial matters such as his signing of final Treaty terms without reference back to de Valera remain matters of speculation.