An Irishman’s Diary about music with special powers, natural and otherwise

Voices from another world 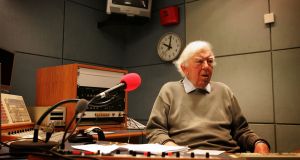 On Saturday night, I realised that it’s almost exactly 10 years since Ciarán Mac Mathúna’s Mo Cheol Thú aired for the last time, after being a fixture on Sunday morning radio for what seemed like forever.

The shock revelation came courtesy of Martin Hayes and Dennis Cahill, who opened their latest set with the programme’s haunting signature tune, The Lark in the Clear Air.

It struck me that there would soon be a whole generation who grew up without hearing this ineffably sad piece of music over Sunday breakfast. In fact, there probably is already, since the concept of sleeping in on the Sabbath was well established long before Mo Cheol Thú made its final bow. But for many of us, that tune will always now have the power to summon up a lost world.

Remembering his own childhood, in Clare, Hayes associated The Lark with a period of calm before he had to worry about getting to Mass.  And there must have been such calm in our Monaghan household too, although for me the melody now mainly evokes the bedlam that followed, as seven children failed to get washed and dressed quickly enough for their mother’s liking.

But of course it also reminds me these days of parental voices that, like Mac Mathúna’s, are permanently silenced.

Which may be why hearing the piece in the Pavillion Theatre made me appreciate anew what a wonderfully sensitive guitar player Dennis Cahill is.

He tends to get overlooked, being essentially the support act to one of the great fiddle masters of this or any era, and his style is in any case understated.

But that’s the beauty of it.  Especially on the slow airs, when Hayes’s violin is at its most desolate, Cahill’s guitar is like the touch of a friendly hand, or a sincere, familiar voice telling the fiddle: “Sorry for your troubles”.

I don’t know why The Lark in the Clear Air is so mournful, by the way. The name suggests something more jaunty and uplifting. But then that’s often the way with Irish traditional tunes. And I suppose larks are entitled to be sad too, on occasion.

Anyway, as usual, Hayes and Cahill had plenty of cheerful music as well.

In fact, some of their 12-minute medleys contain the entire spectrum of human emotion, usually starting with a melancholic air, working up through a hopeful barn-dance or a mildly excited hornpipe, and then gradually getting carried away in an orgasmic frenzy of jigs and reels.

Even so, the other standout of Saturday’s show, I thought, was also a slow piece, Port na bPúcaí, a tune that inspired Seamus Heaney and Seán Ó Riada, among others, and that has a fascinating story (if not several) behind it.

About the only thing music scholars agree on in its connection is that it comes from Inishvickillaune in the Blasket Islands.

Or rather that it comes via Inishvickillaune, because the whole point of Port na bPúcaí (usually translated as “The Music of the Fairies”) is that its emotions are not of human origin.

My favourite version of the story is one that combines eeriness and rationality.  According to this, it was first “received” by Blasket fishermen at sea, who heard it rising as if though the hull of their currach, until one of the men, a musician who had his fiddle with him, played what he was hearing and memorised it.

The scientific explanation for this (first advanced by Mac Mathúna, I think) was that the sound came from whale song, directly below them, and that it may indeed have reverberated through the boat.

But in other accounts, the music was first heard ashore, having floated in on the breeze. That was the version given by Robin Flower, the Oxford scholar who recorded the last decades of life on the Blaskets and who was told that the tune had one night wafted over the house of a local fiddler, who learned it and passed it on.

The legend inspired Heaney’s poem, The Given Note. And many musicians have recorded versions of the otherworldly air, including Seán Ó Riada (on piano), Tony McMahon (button accordion), and Liam O’Flynn (pipes).  But the Hayes/Cahill version is as lovely as any.

According to Flower, incidentally, the tune was believed by the islanders to have marked a funeral. They saw no contradiction in this, he explained: “The fairies, they say, are not immortal. They, too, know death, and the music that went over the house on the island that night was a lament for one of the fairy host that had died and was carried to the island for burial.”