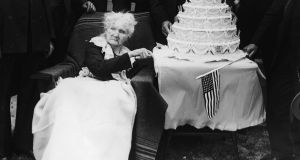 Everyone knows about the role of Tom Clarke’s shop in Ireland’s independence struggle: dispensing newspapers, cigarettes, and sedition from 75A Great Britain (now Parnell) Street, Dublin, within shouting distance of the GPO.

Much less famous is the Cork equivalent. That was also a newsagents, on what used to be Brunswick Street, and it offered a very similar range of products and services.

The differences included a window in which revolutionary pamphlets shared space with holy pictures. And unlike the Dublin shop, presided over by a celebrity Fenian, the Cork one was run by two still-obscure sisters, collectively known as the “Misses Wallace”.

Like Clarke’s, their shop is long gone. So is the former address. Brunswick Street is these days known as St Augustine Street, after the adjoining church, and has been described as a “lifeless vehicular shortcut” just off Grand Parade.

But there was plenty of life there between 1915 and 1922, at least if you were a republican in the know. According to local historian Anne Twomey, the premises was effectively the intelligence centre of the Cork IRA. And the daily shopkeeping of Nora and Sheila Wallace provided the perfect cover for a “vast beehive of revolutionary activity”.

As veterans of the period would later complain, the topography of Cork City is, in general, not ideal for revolution. A bit like the republican movement itself, the river Lee splits dramatically there, turning the city centre into an island, the bridges to which are easily controlled.

The Wallaces’ shop lay at the heart of this island, in close proximity to the RIC barracks at Tuckey Street, on one side, and the Coal Quay Bridewell on the other.

Despite such intimacy, somehow, the shop’s conspiratorial activities went undiscovered for a long time, although by the War of Independence, it was firmly on police station maps.

The sisters’ revolutionary activities were not confined to the premises. Both were also prominent members of Cumann na mBan, which met in Queen Street. And that much of their intelligence gathering work was of necessity outdoors is also a matter of republican record.

If they didn’t die for Ireland, like many of their contemporaries, their health certainly suffered from constant exposure to its bad weather.

Awarding Nora a military service pension in 1934, the State accepted that the TB she had suffered since the 1920s arose from years of working in wet and cold conditions. Even so, she would continue to operate the shop until 1960 and lived for another 10 years after. Sheila – whose pension recognised her status as IRA staff officer – died in 1944.

The extent to which they are forgotten today, insofar as they were ever known, may be partly a reflection of their line of work. Facelessness must have suited them once. But their continuing obscurity contrasts with some of the now brilliantly-lit figures who passed through their shop in those years.

Then there was his successor, Terence MacSwiney. As Roy Foster writes in his book on the personalities of the period, Vivid Faces, MacSwiney was a fiercely single-minded man with a penchant for political drama, whose “greatest success would be posthumous, created by the theatrical spectacle of his own public death”.

But on the smaller stage of the Brunswick Street newsagents, he too had a cameo. According to family lore, MacSwiney “went behind the counter and even sold a newspaper and a packet of cigarettes to a customer shortly before his arrest in August 1920”.

Twomey will shed more light on the shop, and its shadowy proprietors, in a talk in Cork this Saturday. That in turn will be part of a now-annual festival celebrating the life of another daughter of the city, once forgotten locally, but now reclaimed: Mary “Mother” Jones.

The latter emigrated to Canada in the mid-1800s and later travelled to the US where, in widowhood, she became a famous labour activist, her demure appearance belying an implacable commitment to social reform, summed up in the catchphrase: “Pray for the dead and fight like hell for the living”.

The festival in her honour starts today. A full programme is atmotherjonescork.com.