All shook up – An Irishwoman’s Diary on Elvis, weddings and Las Vegas 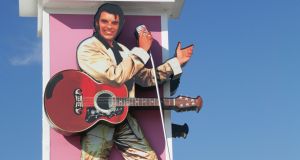 First, those Also Sprach Zarathustra chords crash and boom over startled celebrants around the chapel. Entwined neon cupids flash pink and baby blue above a mike, replacing the altar. Suddenly, huge doors fling open. A shocking pink Cadillac – rumoured to be Lucille Ball’s – shoots through pews driven by the King himself.

And in tightest satin and pompadour, Elvis enters the building!

Or rather, “Elvis”, one soldier in the Las Vegas army of black Elvises, Hispanic “El Vis”, the “Little Person” Elvis and – said to be especially good – “Asian Elvis”, all of them hunka-hunka-hunks o’ burnin’ love.

As the King takes the mike for That’s Alright, Mama, pants a-straining, bride and groom beam, leap from their Caddy and start dancing deliriously. We all dance. Can’t help ourselves. At the end, Elvis drawls “Any way you doooo”, adding the classy “Thank you vurry, vurry much” before turning serious under his pompadour.

“Y’all know as how marriage is a vurry serious institution and as how you should in no way and no how do this wrong. . . ”

But then he adds: “And don’t step on my blue suede shoes”. Soon we jitterbug anew. And that’s it – another knot tied, another couple hitched.

October is good for taking the plunge – 300 a day at 50 crazy sites, from rollercoaster to Treasure Island shipwreck, 90,000 a year.

We’re touring several other chapels, thanks to Joni Moss Graham, wedding planner at LV Wedding Connection. I ask Joni – (dumb question!) – if she has figures for long-lived nuptials?

Joni replies, patiently: “No. I live in a happy world.”

You can’t undo it next morning either, she adds. It’s signed and sealed and delivered, as Little Stevie can sing at your nuptials.

Joni’s is a crowded “happy place” full of choices. “I do” in a 30-minute rotation of the High Roller Ferris Wheel above the Strip with full bar in your cabin; “I do” at the Drive-Thru Chapel; or gondolas at the Venice canal; or a cowboy wedding in the Valley of Fire or Red Rock; or a cowboy or ghost-town wedding in Nelson, a real ghost town; or a mafia wedding at the Mob Museum’s old courtroom. “I do” in front of the Las Vegas neon sign is popular.

No minister? Gene Simmons of Kiss or Austin Powers or Marilyn will do in a heartbeat.

A chopper over the Grand Canyon with Michael Flatley? No trouble, says Joni, who’s hosted one entire Riverdance. If black tights don’t turn you on, Joni can loan you a tux and a pair of ruby high heels.

Nor does she care who wears which.

Best-known on “the Row” is the 60-year-old Chapel of the Flowers, where four chapels spin in constant rotation. Weddings start at $350, four photos included.

Behind the front desk couples leaf through day-after photos.

A wedding party walks past us – a Chinese bride in exquisite white lace, slim as a bird.

We call our congratulations and wonder how she feels. Is she terrified?

And do you feel really married if it’s Vegas? Specially if a gaggle of journalists ask? Maybe you don’t and that’s appealing?

For a semi-formal feel try Alexis Park. Thirty suites and bungalows surround a gazebo and a fountain where plinths permit splashy vows in, er, nuptial Speedos.

A rooftop restaurant with dance floor beckons ($1,350). From 4pm to 8pm is optimum hitching time. Director Jo Ann Richard hosted an Irish wedding here just the other day; the family of 30 flew out and stayed on site.

Leathers and studs never go out of style. Nude weddings demand studded G-strings for all including the “minister” — and you can become a minister by mail from the Church of Universal Life.

Weddings in strip clubs are subtly discouraged, however.

1 Coronavirus: Ireland-Italy rugby match likely to be called off
2 Dublin stabbing: Parking space was at centre of previous rows, gardaí told
3 A cardiac problem that could strike at any time
4 People often ask me why I never want to go back to Ireland
5 Varadkar declines to negotiate with Fianna Fáil on forming government
Real news has value SUBSCRIBE