Alan Dukes: Remember that elections are about promises not priorities

Election 2016: No party can deliver on all of its manifesto and should state its priorities 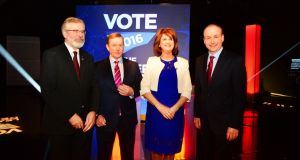 Many of the media debates have been nothing more than shout-fests. “Winning” a seven-way debate does not necessarily mean that the winner has said anything constructive. Photograph: Cyril Byrne / THE IRISH TIMES

There are two elementary propositions that underlie the choices we face in the election.

Public finance is the art of reconciling scarce means to unlimited ends.

Politics is the art of the possible.

A political manifesto that needs more funding than will be generated by the policies proposed will fail the first test. A political programme that does not secure the assent and support of a sufficient number of voters to make it achievable will fail the second.

No vision or set of values can be divorced from these tests. A vision and a set of values express a collection of ambitions to be aimed at. Their achievement necessarily requires the setting of priorities. If some things must be done immediately, others will inevitably have to wait. Like other modern democracies, we are good at defining priorities but we baulk at ranking them.

This problem has been amply demonstrated in the lead-up to this election. The health service has to be sorted out so that people with low or modest incomes can get prompt attention and new treatments for life-threatening conditions must be made available as soon as they appear; we need reinforced policing, improved pupil-teacher ratios in our schools and third-level institutions must be improved; we need a massive social housing programme; poverty must be eliminated and inequality must be reduced; water supply and waste water treatment must be brought to satisfactory standards; public infrastructure provision must be improved, and so on. Each one of these must be done as a matter of urgency. Each day and in each radio or television discussion, debate and interview, one or other and sometimes several of these is or are presented as a “must do”. Progress over the past five years is eaten bread.

Even with superproductive and superefficient public service delivery (which we do not have), the cost of doing all these things would make their achievement in the lifetime of the next Dáil and government impossible. What is the answer? One possible approach is to pick a small number of the issues and devote all available extra resources to them to make a significant improvement. This is implicitly the course urged by the “social revolution” Independents and other groups. It means no progress will be made on the other issues, so that this course of action fails the “politics as the art of the possible” test.

The other extreme is to try to do a little bit of everything but nothing to a satisfactory level. This satisfies nobody and is a grossly inefficient way of using resources. It, too, fails the test.

Good government lies in adopting a course of action somewhere on the spectrum between the two extremes and in explaining satisfactorily the rationale behind the choices made. Neither governments nor oppositions here have used the Dáil to do this in a way that gets their message across properly and is accepted by the public.

More than any election since 1977, this year’s has been marked by attempts on the part of the significant political parties (FG, Labour, FF and SF) to set out policy programmes within a financial framework that takes account of an explicitly-stated forward view of financial and economic prospects. These have all, in some degree, acknowledged the existence and implications of external risks.

The Social Democrats and Renua have put forward sketchy programmes with minimal indications as to how they might implement them. AAA-PBF and a substantial number of Independents have not made the attempt: we know what they want to abolish and what they want to increase but they have not produced funding plans. The Independent Alliance has “principles” but no policies and would support a government in confidence motions (ie support any set of budget proposals?).

A number of media commentators have done the debate a significant disservice by claiming that the term “fiscal space” cannot be understood by the public. It is, in fact, a convenient and easily-grasped concept which the editor of one newspaper group (who clearly understood it without difficulty and who would not claim to be a genius) needed a lengthy sentence to explain. It is precisely the kind of shorthand that the media likes and sometimes even invent. The public has had no difficulty in understanding jargon such as “Grexit”, “Brexit” and “climate change”, each of which encapsulates a set of ideas. It has been disappointing to see that party spokespeople have given in to this media laziness.

Many of the media debates have been nothing more than shoutfests. If you put seven (or even more than two) highly-opinionated people together in a tense competitive environment for a short time, they will inevitably interrupt one another. “Winning” a seven-way debate does not necessarily mean that the winner has said anything constructive. Donald Trump “wins” debates, but who really believes that Mexico will pay for a wall designed to keep Mexicans out of the US? The most useful discussions I have heard have been one-on-one exchanges with well-informed interviewers and some with just two interviewees. If we must have seven-way debates, participants should be heard one by one with a right of reply but placed separately so that they cannot interrupt others.

All the signs are that the immediate post-election period will be at least as interesting as the campaign. Alan Dukes has held a number of government ministries and was leader of Fine Gael from 1987 to 1990