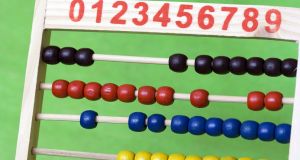 As a synonym for mere counting, the word ‘reckoning’ has fallen into disuse. It’s reserved now, curiously, for ominous usage.

“Schools will increase R” read a headline in the London Times this week, which at first glance I mistook as a reference to the “Three Rs” on which education is founded.

But of course they meant the other great R of our times, the coronavirus reproduction rate, which British scientists were warning would increase if schools there return.

In efforts to prevent such an upsurge, the Fourth R is likely to join the other three as a feature of the education curriculum for the foreseeable future.

The original phrase was famously based on a joke about literacy, since at least one of the “Three Rs” – writing – does not start with that letter.

Nor does arithmetic, until you lop its opening vowel off, although there is a theory that, at one time, the third “R” was “reckoning”.

As a synonym for mere counting, that word has fallen into disuse, except for one sense.

It’s reserved now, curiously, for ominous usage. A reckoning is what, for example, a Government can expect to face if it lets the coronavirus R-rate exceed 1.

Even as I write this, it has been confirmed that Irish schools will reopen at the end of August. That, or at least the first of September, is also by tradition the start of the season when oysters can be eaten safely.

Let’s hope the old proverb about months with an R in them doesn’t acquire any new layers of meaning this year.

It must have passed me by when I was studying for the Inter Cert a thousand years ago, but Shakespeare’s Romeo and Juliet includes an interesting exchange on the letter R, which was pregnant with meaning in Elizabethan times. This occurs in Act 2, Scene 4, where Romeo is conspiring with Juliet’s nurse.

Nurse: […] Doth not rosemary and Romeo begin both with a letter?

Romeo: Ay, nurse, what of that? Both with an R.

There the nurse gets distracted by something and leaves her thought hanging. But as explained elsewhere in Shakespeare, rosemary was a symbol of remembrance. As a dietary supplement, it was even thought (and still is by some) to improve memory. Its smell alone was considered health-giving.

There was also an old folk belief that a man who could not smell rosemary was incapable of love, although in these more enlightened times, we now know that could also mean he was just suffering from anosmia, due to a viral infection.

The nurse’s comment about R being “the dog’s name” refers to the letter’s growling sound when rolled. And that’s telling too, because in most of England today, unlike in Ireland and America (outside Boston), Rs are not rolled. But they were back then. Which is one of the reasons why, when you hear Shakespeare in Original Pronunciation (OP), a specialty of some British theatre enthusiasts, its sounds oddly Irish.

The viral R is conspicuously absent from one of the more eccentric lexicons on my bookshelf, A Dictionary of One-Letter Words by Craig Conley, published back in 2005, when Sars was the worst health crisis facing the world.

Conley’s entries for the letter instead include the fact that it is a movie rating guide, that it was the old Roman numeral for 80, and that in algebra, it represents “a square upper triangular invertible matrix with positive entries on its diagonal”. Phew. It was also one of several letters with which, in the past, criminals were branded. To be R-rated in that context meant you were a “rogue”.

Under the subheading of “literature”, meanwhile, the dictionary includes a quotation from Daphne du Maurier’s Rebecca, wherein the unnamed narrator finds a book dedicated by her husband to his previous love, the Rebecca of the title and, tearing the page out, throws it into the fire, watching it disappear: “The letter R was the last to go, it twisted in the flame, it curled outwards for a moment, becoming larger than ever. Then it crumpled too; the flame destroyed it. It was not ashes even, it was feathery dust.”

Read in the context of the pandemic, that passage carries an optimistic message. As we look forward to a curve-flattening summer and autumn, we all hope to see the R crumple and disappear.

Less happily, in the book, the memory of Rebecca haunts the narrator throughout. But on the plus side, I find on looking up the rest of that passage in the original text, that it continues, aptly: “I went and washed my hands in the basin. I felt better, much better.”