A Tale of Two Cities – Frank McNally on Brendan Behan, the IRA’s 1939 campaign, and the other Fontenoy Street 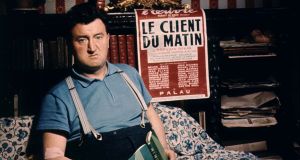 Brendan Behan: Liverpool and its docks were infamously the target of a 16-year-old Brendan Behan. Photograph: Hulton Archive/Getty Images

Thanks to Paul Cooper (Letters, May 14th), I now know there is a Fontenoy Street in Liverpool as well as Dublin.  And as I have since learned, there used to be a Fontenoy Gardens as well.

The “Gardens” part was a euphemism because there was no grass involved. It was a multistorey tenement block, once housing many immigrants from Ireland who worked in the nearby Liverpool docks. Whether they knew about the Irish military glory enshrined in their address, I have no idea. In any case, the complex was demolished in the 1980s.

In an intriguingly titled online blogpost, “Ringo the Ratcatcher of Fontenoy Gardens”, a man named Tom Brennan recalls growing up there. Ringo was his dog. As for Fontenoy Street and Gardens, and their commemoration (unusual in the UK) of a battle Britain lost, Brennan didn’t know anything of that until reading about it in “the Echo” once.

Then he ended up living in Brighton, near a cemetery where the celebrity dead included one Phoebe Hessel, born in 1713, a rare (but not unique) example of a woman who had served in the British army for many years while dressed as a man.

She had survived Fontenoy (1745), despite a bayonet wound, and was outed only when, for some misdemeanour, she was sentenced to be whipped, which required removal of clothes. The whipping was suspended, along with her army career. But she kept the pension and lived to be 108.

Getting back to Liverpool and its docks, meanwhile, they were also infamously the target of a 16-year-old Brendan Behan when he crossed the Irish Sea with a box of bomb-making equipment in the autumn of 1939.

Behan had been born in Dublin’s north inner city, not far from the other Fontenoy Street. Then the family emigrated to the outer darkness of Crumlin, where as an uncle put it, the natives “ate their young”. But for his later teenage years, Behan would have another address – an English prison for young offenders. He had been tracked from arrival in Liverpool until his arrest, breezily described in the introduction to Borstal Boy: “Friday, in the evening, the landlady shouted up the stairs: ‘Oh God, oh Jesus, oh Sacred Heart, Boy, there’s two gentlemen here to see you.’ I knew by the screeches of her that the gentlemen were not calling to inquire after my health, or to see if I’d had a good trip. I grabbed my suitcase, containing Pot[assium] Chlor[ide], Sulp[huric] Ac[id], gelignite, detonators, electrical and ignition, and the rest of my Sinn Fein conjurer’s outfit, and carried it to the window. Then the gentlemen arrived. A young one, with a blond Herrenvolk head and a BBC accent shouted: ‘I say, grab him the bestud.’”

If the organisation of his one-man mission was incompetent, the timing was even worse.

For the first eight months of 1939, the IRA had brought chaos to Liverpool and other English cities with a constant barrage of attacks.

These were aimed at causing damage and inconvenience, while avoiding casualties, and succeeded in both until a botched attack in Coventry killed five people and intensified a crackdown. The campaign was over two months before Behan, acting on his own initiative, arrived.

The IRA cell that caused most of the damage in Liverpool included a man named Vincent Crompton, English-born, then 36. He and a Jean Dobson (19) were the “Bonnie and Clyde” of the Liverpool IRA, until their arrests. But their notoriety was soon eclipsed by war.

And ironically, the 1939 campaign would now be forgotten had not Behan’s inept contribution launched a colourful literary career.

Jean Dobson was a cover name for Margaret McDonnell, on whose behalf Crompton later pleaded for leniency, duly granted. She was given a suspended sentence on condition she avoid bad company. The news archives are silent about her thereafter.

As for Crompton, the last of a series of mentions in The Irish Times was 16 years later, when he was charged with a non-fatal shooting in Dublin. He was homeless by then and, lacking a safe house, had before the incident taken a nap in the back of a parked lorry, with the driver’s agreement.

But when he returned later hoping to spend the night in the lorry, another man refused access. The court heard that Crompton had complained: “So this is the thanks I get for sacrificing ten years of my life and ruining my health […] in the Republican cause”. A fight ensued and the man was wounded.

Crompton turned himself in next day, handing over the gun and pleading guilty. He was sentenced to another 15 months for the incident, which had happened in – of all places – Fontenoy Street.