A long way from Tipperary to an Irish massacre 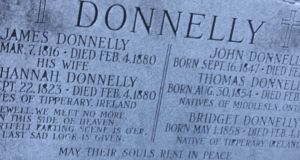 Around the time that Red Kelly, father of Ned, was being deported to Australia, another Tipperary family left Ireland en masse, travelling in the opposite direction. They were named Donnelly, their destination Canada. And unlike the Kellys, they were voluntary emigrants. But in time they would match the Australian family’s notoriety, at least in the part of the world they ended up.

That was called Middlesex county, a near Tipperary-sized enclave nestled between three of the Great Lakes, west of Niagara Falls. Not only was it similar in proportion to the Donnellys’ county of origin, it became from the 1840s a virtual colony of Tipperary, with perhaps the greatest concentration of its emigrants in a rural setting anywhere.

The area was also a microcosm of Ireland’s sectarian make-up. In the township of Biddulph, Protestants predominated in one part, Catholics in another, divided by what was called the “Roman Line”. They also brought their competing political organisations with them, including the Orange Order and Ribbonism, although these do not seem to have been factors in the violence for which the Donnellys became infamous, first as perpetrators, then victims.

Instead, it may be that more localised rivalries had followed them from Tipperary, where many of the arrivals had lived in the same area: Modreeny, near Borrisokane. If so, enmity was exacerbated by competition for land in their adopted country, where it was the norm for newcomers to squat on unoccupied territory, and establish ownership rights by clearing it, as was usually necessary.

The Donnellys did this to a 100-acre site, but then got embroiled in litigation by other claimants, losing half of it in arbitration. Nobody was happy with the outcome and a feud developed, escalating at a “logging bee” in 1857, when James Donnelly, the patriarch, killed one of his rivals, Patrick Farrell, and went on the run.

After that, ostracism may have added to the Donnellys’ drift towards outlaw status. In any case, Biddulph and its neighbouring township Lucan (named after Lord Lucan, or his Irish estates) was notorious in subsequent years for lawlessness, with assault, arson, animal maiming, robbery, and even murder a regular occurrence.

The Donnellys were blamed for most of this, provoking in 1876 the formation of a vigilance committee among Catholic farmers near the Roman line, where they lived. This did little to stem the trouble, and by 1880, some locals had had enough.

One night in February of that year, about 30 vigilantes visited the main Donnelly home at midnight, killing four occupants: James, his wife, a son, and a niece.

They then moved to another house, where a fifth family member was shot dead. Their massacre made the front of the New York Times, which reported that bodies had been “burned to cinders after having been first horribly hacked with axes and other iron instruments”.

Curiously, or maybe not, the event failed to feature in newspapers this side of the Atlantic. And in time, silence also settled around it in Lucan-Biddulph, especially after two inconclusive trials, with no convictions.

The omerta allowed history to be gradually overgrown by colourful rumour. Seventy years later, this flowered into a fanciful book, The Black Donnellys (1954) by Thomas Kelley, which sensationalised the story while portraying the family as mere incorrigible desperadoes.

A somewhat more sympathetic account, The Donnellys Must Die, followed in 1962, although its attempts at dispassionate history were still packaged as a tale of “ancient feuds, bloody conspiracy, [and] gruesome murder”. Other legacies of the massacre have included a Canadian punk band, also called The Black Donnellys, formed in the 1980s and still touring.

A much more sober treatment of the story features in the latest annual Tipperary Historical Journal, written by Gerard Walsh. Like a frontier settler taming wild land, he attempts to clear away the conjecture and conspiracy theories, before delivering a restrained explanation for how things got so far out of hand: “The Donnelly family staked a claim to land that others owned. Given the nature of the judicial decree, it meant that both the persecuted and the persecutors ended up on living right beside each other. In a rural wilderness, the resultant relationship could only be toxic – especially when all the parties are from the same background and geographic origin.”

“Unfortunately,” as Walsh concludes, one outcome of the 30 years of mayhem was that “in Upper Canada, the name ‘Tipperary’ became synonymous with societal dysfunction”.

5 Long Covid in children: New data is cause for concern, scientists say