A different Drum – An Irishman’s Diary about Border tourism 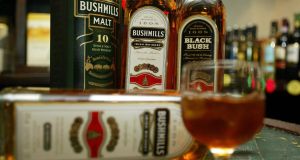 “There were no beer taps on the makeshift counter, only bottles. Whiskey was measured by hand.”

The village of Drum in Co Monaghan is entirely dry these days, but 20-odd years ago I spent a memorable evening in its last surviving licensed premises.

Like the village itself, the pub was a very Protestant affair. You would have been hard put to get drunk during its opening hours, by then confined to Saturday evenings, and never extending into the Sabbath. If you did manage to get inebriated, I imagine, you’d be on your own.

The pub’s decor was like something from the Wild West. There were no beer taps on the makeshift counter, only bottles. Whiskey was measured by hand. There was no gents either, never mind a toilet for the ladies, which would have been superfluous.

But there was nothing wild about the clientele. The atmosphere was only slightly less sober than at a prayer meeting. And any threat of rowdiness would have been discouraged by the stern supervision of the proprietor, Bertie Anderson, a teetotaller who, it was said, took a dim view of drinking but was reluctant to relinquish the licence for sentimental reasons.

Well, Drum’s only pub has long since closed, permanently. But as I learned this week, the churches are all still there, and although the Rev Dane has returned north of the Border in the interim, the Free Presbyterians’ current pastor is arguably even more of an exile.

His name is Larry Power, and as I discovered when I rang him yesterday, he’s from Kilkenny. Naturally, this means he used to play hurling.  “There wouldn’t be much of that in Monaghan,” I sympathised, but he knew this already.

I’d been reminded of Drum by the words of Heather Humphreys, a daughter of that parish, when she was speaking on Thursday about her own family’s long, strange journey.  At an event in Belfast to discuss the 1916 Rising, she mentioned that her grandfather had been one of the 12,000 Monaghan men to sign the Ulster Covenant, pledging defiance to home rule.

Now, 104 years later, not only was she a Minister in the Republic’s government, she was the one responsible for the 1916 commemorations. As she said, it was a turn-up her granddad could hardy have imagined “in his wildest dreams”.

Drum is one of countless places along the Border named (from “droim”) for the outstanding feature of the surrounding drumlin belt, a small, rounded hill. The village is unusual in lacking a suffix, as well as a pub, but the bare “Drum” suits it, because it’s also home to one of the Republic’s few remaining Orange lodges.

Even so, for a true flavour of the emotions once aroused in those parts by religious politics you need to travel a few miles farther north to another Drum –Drumswords – where a “rising” of a different kind took place once.

Among the people buried in a churchyard there, since 1828, is an Orangeman called David Burke, whose unpopularity with local Catholics led to a battle on the day of his funeral.

Not content with that, the night after his burial, the Catholics dug him up again and hanged him, posthumously. The occasion was suitably stormy. So for long afterwards, violent weather was always compared with “the night they riz Burke”.

A Wild Drumlin Way, or whatever you want to call it, could stretch from the Atlantic version in the west, at Leitrim, to the Mourne mountains in “Ireland’s Ancient East”. All it would take, like those, is a bit of unifying signage (the Atlantic Way’s wave motif could be easily adapted for drumlins) and cross-Border promotion.

Then, you would hope, business would look after itself. The existing Castle Leslies and Neven Maguires would continue to thrive. But new cafes, craft shops, and B&Bs would pop up along the route. And who knows, there might even be room for the odd pub.

1 Gerry Thornley: Wild reactions to this Ireland team as fickle as the wind
2 Irish health officials to ramp up precautions against coronavirus
3 What did it mean to be an Irish teenage girl in the early 1990s?
4 Fintan O’Toole: If murderous dissidents are wrong, so was Provisional IRA
5 Solar panels: Are they worth the investment?
Real news has value SUBSCRIBE