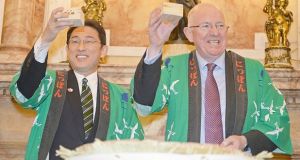 This year, Japan and Ireland mark the 60th anniversary of the establishment of diplomatic relations on 5th March 1957. At the start of this commemorable year, I am very happy to visit Ireland and to have had an opportunity to celebrate this occasion with Foreign Minister Flanagan at the opening ceremony last night. I wonder if the people of Ireland are aware that the friendly relations between Japan and Ireland have been growing steadily deeper for such a long time. Our bilateral relations are founded on exchanges between people. A wide range of commemorative events will be held in many places of both countries during this year of the 60th anniversary of the establishment of diplomatic relations. I hope this will be an opportunity for many Irish people to have direct contact with Japan and also to visit Japan.

Japan and Ireland have both achieved their current prosperity based on the global free trade system. In a world where we witness an increasing trend towards protectionism, there is a greater need than ever to promote and strengthen the free trade system.

Japan, along with Ireland, wishes to advocate the importance of liberalism to the world. In particular, achieving an agreement in principle on the Japan-EU Economic Partnership Agreement (EPA) as early as possible would send a strong message that Japan and the EU continue to be champions of the free trade system throughout the world.

Last year’s decision by the UK to leave the EU following a referendum was one of the events that shook the world. As many Japanese companies operating in Europe, Japan is closely following the situations of the UK’s exit from the EU. In order not only to ensure the smooth business operations of companies in both the UK and the EU, but also to enhance predictability of the UK’s withdrawal process from the EU, we wish to cooperate with Ireland, which shares a border and has very close economic ties with the UK.

In recent years, an increasing number of Japanese companies are expanding their operations to Ireland, which boasts an outstanding business environment. Currently, there are approximately 80 Japanese companies operating primarily in the pharmaceutical, aircraft leasing, and financial service sectors, with a total investment amounting to €1.6 billion. As the medical devices and pharmaceutical industries in which Ireland excels are at the very heart of innovation that Japan regards as so important, we can look forward to collaboration between private companies and research institutions of both countries in these particular areas. On the economic side, we also wish to further strengthen cooperation through innovation.

On the subject of peace, having overcome a troubled past and achieved reconciliation in the region, and keeping UN-centred diplomacy, Ireland has not only taken the lead on the UN General Assembly resolutions that contributed to the passage of the Non-Proliferation Treaty (NPT), but since UN Peacekeeping Operations were established, it can be said that not a day has passed without Irish people striving for the cause of world peace.

Last year, Japan welcomed both the G7 Foreign Ministers in April, and US President Obama in May to the Hiroshima Peace Memorial Park, thus taking a historic step towards a world free of nuclear weapons. Following on from this, in December Prime Minister Abe and I went to Pearl Harbour in Hawaii to offer our prayers for those who perished there, and demonstrated our resolve towards the future that we must never again repeat the devastation of war.

Japan and Ireland will be able to deepen their collaboration also for the international peace and stability.

In the world of rugby, the success or failure of the scrum is the key to victory or defeat. In exactly the same way, when tackling problems in the international community, the important factor is whether countries can build a solid partnership - just like a scrum. As Japan and Ireland celebrate this year’s 60th anniversary of diplomatic relations, let’s build a tight scrum and move forward step by step together for global peace and stability.