Óscar Romero was a martyr by default

Assassinated El Salvadorean bishop to be canonised in Rome 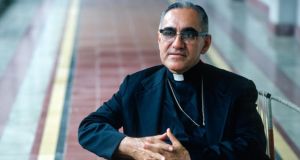 Archbishop Óscar Romero: In his weekly sermons, broadcast all over he country by Catholic radio stations, he took to reading lists of the latest atrocities by security forces and the death squads in El Salvador. Photograph: Leif Skoogfors/Getty Images

In March of 1968, four Franciscan priests from Ireland, of whom I was one, reported for duty to the diocese of San Miguel in the eastern corner of El Salvador, when we first met Óscar Romero.

At that time Msgr Romero was vicar general of the diocese, which meant he ranked only behind the bishop. He was responsible for maintaining the discipline of the clergy of the diocese - a tough task.

Romero had a large parish in the city where he also offered board and lodging to priests who came in from parishes in the hills. This was not so popular, as I recall, since Romero was a famously strict disciplinarian who ran a very tight house.

He was Rome-trained, and it showed. He always wore his soutane, said his daily Mass, read his breviary and was in every way an exemplary parish priest, shy to the point that some called him aloof. He was considered by the local business and professional class to be an excellent house guest at business gatherings.

Romero would one day be a bishop and everybody knew it. He was careful, very conservative, and fitted in well with the wealthy and powerful, and with higher-ups in the church.

When the murderers silenced Rutilio Grande they awakened Óscar Romero. 'If they killed him for what he did,' Romero said, 'I, too, have to walk the same path'

He was not in any way drawn to the “liberation theology” movement. At a personal level, he was closer to Opus Dei than to those of us of a liberationist bent.

As archbishop, Romero operated strictly by the Vatican book. In normal times and in an ordinary country that would have served him well.

But the times were not ordinary.

El Salvador was operated by the “14 families,” who constituted what an American ambassador described as “one of the most selfish oligarchies the world has ever seen.” Opposed to them was a growing insurgency. Leftist, but rooted in the grievances of a profoundly oppressed peasantry.

The oligarchy produced the leading politicians in El Salvador, owned almost all of the media, while the army, security forces and police were at their beck and call.

According to the UN-sponsored Truth Commission for El Salvador, the infamous “death squads” were organised and financed by “some of the richest landowners and businessmen inside and outside the country. “

The death squad leader Roberto D’Aubuisson was known as ‘Blowtorch Bob’ because of his preferred instrument of torture. D’Aubuisson would go on the radio and accuse people by name of being “Communists”.

The next morning, their mutilated bodies - often headless, with genitals cut off and in the case of women, with terrible signs of rape – would turn up in the usual roadside dumping grounds.

Fr Rutilio Grande, the man we Irish Franciscans had originally wanted for our bishop, was the first of many clergy to die at the hands of right-wing thugs. He was cut down on the road to his native village where he was scheduled to conduct a novena. The coroner reported that he was struck by 12 bullets of the type used by security forces.

When the murderers silenced Rutilio Grande they awakened Óscar Romero. “If they killed him for what he did,” Romero said, “I, too, have to walk the same path.”

He began to speak out about “peasants without land or steady work, without water or electricity in their poor dwellings, without medical assistance when the women give birth and without schools when the children begin to grow . . . ”

In his weekly sermons, broadcast all over he country by Catholic radio stations, he took to reading lists of the latest atrocities by security forces and the death squads.

He wrote to then US president Jimmy Carter and asked him, Christian-to-Christian, to suspend aid to the brutal Salvadoran military. From the altar he called for the ordinary soldiers to refuse to turn guns on their own people.

Of course Romero did not get away with it. Blowtorch Bob saw to that.

On the evening of March 24th, 1980, Archbishop Romero was saying Mass in the chapel of a local hospital. It was hot, as always, and so the doors were open, giving the shooter a clear shot at the celebrant.

He struck and killed the archbishop with an exploding bullet made especially for the death squads by a local dentist. For his work, the shooter was paid the equivalent in local currency of US $400.

In his last sermon, Romero said something that to me stands as a worthy epitaph. “We know,” he said, “that every effort to improve society, above all when society is so full of injustice and sin, is an effort that God wants, that God blesses.”

Fr Pat Hudson was a Franciscan priest. He died in July 2017. This piece is taken from his unpublished memoir Friars and provided by journalist Elgy Gillespie