Olly Murs: Murder on the Dancefloor

Olly Murs has the cheeky-chappy pop persona all sewn up, but there’s a lot more to the X-factor alumnus than his wink and grin – and the pressure is on to progress as an artist 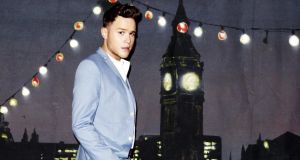 If you had told Olly Murs this time four years ago that he would be an internationally successful pop star, he probably would have tipped his pork-pie hat at you with a wink and a mischievous grin. Or at least, that’s what you imagine he would do; it’s hard to decipher just how much of Murs’s personality is his own, and how much has been molded to fit the “cheeky chappy” persona that Robbie Williams once made his own.

It’s a cynical way to look at things, perhaps – but to his credit, Murs does seem less brainwashed by the starry-eyed industry jargon that most X Factor alumni we’ve spoken to in the past. It’s been just over three years since he appeared on The X Factor , all dazzling smiles, old-fashioned braces and nice-guy charm. Before that, his biggest claim to fame had been appearing as a contestant on Deal or No Deal in 2007 (where he ended up with just £10 to his name).

Still, as Noel Edmonds predicted with a conciliatory pat on the back, he “did not have failure written over [him]”. Murs’s musical career has been infinitely more fruitful than his game show one: three albums down the line, the Essex boy is one of the biggest success stories to emerge from The X Factor .

Two weeks ago, he appeared alongside some of the biggest names in British showbiz (wearing a wedding dress, to boot) for a Comic Relief sketch. He is currently selling out arena dates across Britain and Ireland on the back of his huge third album. Not bad for a chap who worked in recruitment consultancy before his big break.

“Have I changed?” he says, slouched in a noisy corner of his dressing room in Birmingham, where his luxury tour bus has taken him. “Yeah, I think I have changed. I don’t think it’s for the worse, but I think when life changes around you so drastically, your way of living changes, too.

“But I don’t think I’m any different to the person I was before; I think that I’ve just adapted to a new life, really. I’m more confident in myself, I’m more self-assured, but not in an arrogant or cocky way – I just know what I wanna do much more. I think when you find a job that you love and when you’re good at something, it just makes you more confident.”

He puts his success down to hard work, something that he says many X Factor contestants – naming no names, of course – have shied away from in the past.

“I think what the contestants forget is that when the show finishes, you’re not this massive star – you’ve gotta work for it . You can’t just expect to walk off the show and everyone to bow down for you, just because you’ve been on TV for three or four weeks.

“A lot of the contestants now get treated like they’re superstars, like they’re massive and have sold millions of records and are huge. I think that’s the difference with the likes of myself, Cher Lloyd, One Direction, JLS; you have to earn the right to have success.”

His involvement with the show after he appeared as a contestant (he has co-presented spin-off “after-party” The Xtra Factor for the past two years) means that his name is perhaps more synonymous with the show than previous contestants – has that made the attachment difficult to shake?

He pauses, carefully choosing his words.

“I think it’s a great springboard for any artist. Personally, I haven’t abused it – I enjoyed the show and it gave me an amazing platform, but I’ve had to work my arse off for the last 3½ years to get to where I am.

“It’s amazing for anyone who wants to be a singer and have an amazing career and wants to get into music, but the thing is when they finish the show, it’s not the be all and end all. You’ve gotta create something for yourself; no one’s gonna sit there and hold your hand.

“You’ve only gotta look at what One Direction have achieved – they’ve worked really hard to get to where they are and they’re the biggest band in the world right now.”

Selling millions of albums doesn’t make you immune to criticism, though. Does he read reviews?

“I have in the past,” he admits. “I think it’s good sometimes to hear what other people think of your performance, if they’ve got constructive criticism. I think when they’re mean and more vindictive and it’s more personal, that annoys me more than anything, because they don’t know me. So if you’re gonna be critical of the music and say ‘I don’t like the music because it’s rubbish, it’s this and it’s that’, then fair enough, I don’t mind that. It’s when they get personal about my personality and who I am, I think that’s out of order. When it becomes a personal vendetta against you, I think that’s a bit harsh.”

Who couldn’t like Olly Murs? Like the aforementioned Williams, he has tapped into the likeable-pop-star-with-a-twinkle-in- his-eye market – the kind of bloke that guys want to be mates with and girls could bring home to their mum (whom he’d probably charm, too).

He is the sort of pop star that is easier for haters to ignore than to launch a campaign of hostility against (Justin Bieber should be so lucky).

Still, despite the multi-platinum albums and the general good will directed toward Murs, he says that the pressure is on to progress as an artist.

“I see myself as a pop star, for sure,” he says, “but I don’t look at anyone else and say, ‘this is what I wanna do’. I just try to do my own thing, and if it works, it works. I feel like if you do pop music, then you should be able to be creative and try all different kinds of music out, and I think that’s what I’ve done. Dance With Me Tonight was a very old-school Motown record; Heart Skips a Beat was a much dancier record; Please Let Me Go was more reggae and had a bit more of a ska feel to it; Army of Two has more of a traditional pop sound to it . . .

“I think you’ve got to evolve as an artist by trying different things out, and I think that’s what I’ve done in the last couple of years. And I’ll continue to do that throughout my career.”

In the past few years, Murs’s US profile has grown, following a tour with pals One Direction, a high-profile friendship with Robbie Williams and the slow-burning nature of some of his singles. He tells of his delight at Troublemaker slowly climbing the US iTunes charts, while a recently filmed cameo on 90210 will soon air, further augmenting his name with US audiences.

“My expectations of America . . . well, I haven’t got any, really,” he says, shrugging. “We’re just gonna go over there and see how it goes. I’m gonna spend a bit of time there, but I’ve got other markets [to think of]. But there’s lots of good things happening at the moment, so I’m really pleased. It’s working really well.”

Given that the newest entries in today’s pop world are increasingly young, will his comparatively ancient age – he is 29 in May – be damaging to his image?

“Nah, nah, not at all,” he insists. “I don’t think age even comes into question, it all depends on the market you’re aiming for. You’ve only gotta look at Robbie, look at Justin Timberlake; they’re in their 30s. I’m 28 and I’ve got a great young fan base as well as an adult fan base. It all comes down to music, at the end of the day.

“If people want me here, then people will continue to buy my records. And if they don’t, well I’m quite happy to go back to Essex and live a normal life. That’s not a problem.”

Could he really go back to a normal life after tasting pop stardom? Perhaps not, but there are other options already available to him should his music career suddenly sour.

Already proven as a presenter, he is open to the possibility of more TV and acting work – but as you might expect from one of pop’s nice guys, his main aim for the next decade is to simply be happy. Ahhhhh.

“In 10 years time, I’ll be close to 40, so I hope to be in a position where I’m financially stable and I’ve got a great family and friends behind me,” he proclaims. “Hopefully married, hopefully kids, that I’m enjoying singing and that people still like me. If I’m still doing tours, still performing at this level, then I’d be delighted – but you just never know.

“I think you always want to do better and get more number ones and keep being successful and keep touring. It’s a job at the end of the day and I don’t want this to end. If it started to end and was rubbish and I couldn’t do it any more, I’d be annoyed. I love what I do and I’ll continue to do this for the rest of my life.

“Or,” he says, another mischievous grin practically palpable over the phone line, “until people get fed up with me.”