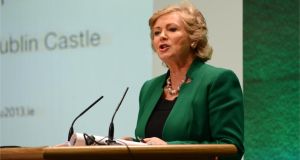 Minister for Children and Youth Affairs, Frances Fitzgerald is set to appear at the Joint Oireachtas Committee on Health and Children today. Photograph: Dara Mac Dónaill / The Irish Times

A group of around 50 youth workers and young people took part in a demonstration against cuts to youth work budgets this morning.

The demonstration coincides with Minister for Children Francis Fitzgerald’s appearance before the Joint Oireachtas Committee on Health and Children.

SIPTU organiser Paul Hansard, said over the past two weeks, youth projects working in disadvantaged areas in Dublin have received their budget allocation for 2013, with most facing a 10 per cent cut, adding he feels the current Government is “uncaring”.

“These projects are funded by the Department of Children via the City of Dublin Youth Services Board,” he said.

“Once again youth work has been disproportionately targeted by Government. It is impossible to maintain the delivery of a professional service when the national budget for youth programmes has been slashed by 30 per cent since 2008.

“The true cost of this policy can be seen in a recent INDECON report commissioned by the National Youth Council of Ireland. It showed that for every €1 spent on youth work, the State saves €2.22 on other services.”

One of the youth workers affected by cuts Aishling Golding, said the work towards helping disadvantaged young people with their lives.

“Some of the young people we work with face situations that involve exposure to drugs and violence. Youth projects are critical in helping these young people to make the right choices in their lives,” she said.