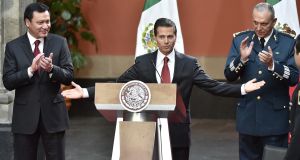 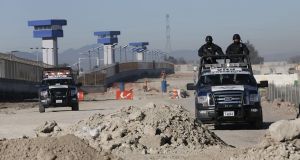 Statistics from Mexico’s war on drugs tell a story so cruel it can be difficult to comprehend. Estimates of the number killed over the past decade range from 50,000 to over 100,000, while some 22,000 have been forcibly disappeared.

The country also suffers the highest number of kidnappings in the world and reports of torture have risen 600 per cent in recent years.

To understand the quagmire Mexico is in, however, you need to recognise that the production and trafficking of narcotics has been an integral part of the country’s economic lifeblood for many decades, stretching back to the early 20th century.

In many rural areas it has developed its own folklore, complete with traditional songs and ceremonies, as involvement in narcotics production has become a multi-generational community identity.

What has changed in recent times is the level – and the ferocity – of the violence.

So what happened to upset what was once a stable, albeit illicit, pillar of the country’s economy?

Ironically, much can be traced back to Mexico’s transition from a de facto one-party state to a democracy. When the pro-business National Action Party won the presidency in 2000, ousting the Institutional Revolutionary Party (PRI) after 71 years in power, a long-standing “pax-narcotica” began to disintegrate.

The decline of this arrangement followed soon after the US-funded war on drugs in Colombia bought down the Medellín Cartel headed by Pablo Escobar.

With a power vacuum in the international drugs trade, and the collapse of PRI political hegemony at home, the Mexican capos (commanders) saw their chance and the long-standing stability of the plaza system crumbled.

It wasn’t until December 2006, however, that President Felipe Calderón provided the spark that lit the inferno.

In a move that signalled the end of peaceful coexistence, the newly elected leader dispatched 6,500 troops to his home state of Michoacán in response to rising drug-related violence.

In the months and years that followed, the Mexican government waged a ferocious and largely ineffective military and judicial campaign against the drug lords.

Deploying huge numbers of marines and heavily armed federal police to all corners of the country made matters worse for ordinary citizens. The killing of senior capos served only to escalate the bloodshed as power-struggles ensued and relations between different criminal groups were destabilised. Moreover, with the cartels employing former military personnel as sicarios – highly trained professional killers – and a flood of military-grade weaponry flowing from the US, they were willing and able to engage in prolonged and often-devastating battles.

Some also responded with deliberately extreme brutality – mutilating corpses and hanging them from bridges, for example – as part of a savagely effective strategy to traumatise the public in order that it might turn against the government’s confrontational campaign.

Since the PRI returned to power in 2012, President Enrique Peña-Nieto has made it clear that reducing violence is his administration’s priority. Many believe this implies allowing one of the cartels to thrive so as to overwhelm the others and impose a semblance of stability. The vexed question, of course, is which organisation to favour.

While Los Zetas, originally formed by a group of disaffected special forces officers, has become so notorious for its viciousness and targeting of civilians that any indulgence of its activities would be unthinkable, the Sinaloa Cartel is regarded as the likely contender for dominance in a new “pax-narcotica”.

Led by newly rearrested Joaquín “El Chapo” (shorty) Guzmán, who escaped from a maximum-security prison for the second time last year, it remains the largest of all the cartels and controls much of the territory along the US border. Recapturing “El Chapo” was something of a political necessity, with immense pressure both domestically and from both the US following his most recent escape.

Figures on arrests, prosecutions and security force actions against the Sinaloa Cartel itself suggest it has not always been targeted with the same vigour as its competitors, however.

Progress in reducing violence has nevertheless been slow and, as such, the future remains unclear for ordinary people here.

Restoring a “pax-narcotica”, while far from an ideal objective, may be the necessary first step towards a more meaningful democracy, however. For the time being, it appears to be the only future worth fighting for. Luke Holland is an independent human rights consultant who has worked extensively in Latin America. He is based in Mexico City.