‘All the lefties were WikiLeaks softies. Now they are getting a different perspective’ 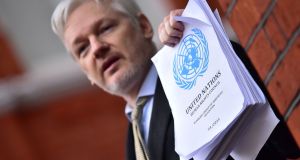 In a February 5th, 2016, photograph, WikiLeaks founder Julian Assange speaks from the balcony of the Ecuadorian embassy in London where he has been living for more than three years. Photograph: Dominic Lipinski/PA Wire

How did WikiLeaks go from darling of the liberal left and scourge of American imperialism to apparent tool of Donald Trump’s divisive, incendiary presidential campaign?

As usual, they were inside-the-beltway gossip rather than game-changing: The campaign tried to push back the Illinois primary, believing it would make life harder for moderate Republicans.

That has not stopped Trump trying to make hay from the leaked emails and deflect attention from allegations of sexual harassment against him.

“Very little pick-up by the dishonest media of incredible information provided by WikiLeaks,” he tweeted on Wednesday. “So dishonest! Rigged system!”

Mrs Clinton’s speeches to Wall Street banks were apparently revealed in an email dump last Friday, just minutes after the release of a video in which Trump was caught boasting about groping women – timing that many felt was more than just chance.

This follows a hack in July designed to embarrass Mrs Clinton on the eve of the Democratic National Convention.

Robert Mackey of The Intercept website wrote in August: “The WikiLeaks Twitter feed has started to look more like the stream of an opposition research firm working mainly to undermine Hillary Clinton than the updates of a non-partisan platform for whistleblowers.”

The seeming alliance between Trump and WikiLeaks is an astonishing role reversal. In 2010 it was lauded by transparency campaigners for releasing, in cooperation with publications including the Guardian, more than a quarter of a million classified cables from US embassies around the world. WikiLeaks founder Julian Assange became a hero to many.

At the time, Republican politicians expressed outrage at WikiLeaks, but now some are seizing on its revelations as potential salvation for Trump’s ailing candidacy. Newt Gingrich, the former House speaker, took part in a media conference call about an email that purportedly showed Clinton campaign mocking Catholics.

Conversely, liberal activists have expressed dismay at the hack of Clinton campaign chairman John Podesta’s email account and the calculated timing of the release.

Neil Sroka, spokesman for the pressure group Democracy for America, said: “There is a huge difference between risotto recipes in John Podesta’s emails and the Pentagon Papers. The news value of these Podesta emails is fairly limited and the activist value is even less.”

Mr Sroka added: “WikiLeaks is like the internet. It can be a force for good or a force for bad. Right now it is propping up a candidate running the most hateful campaign in modern times.”

Last week US intelligence officials blamed Russia for previous hacks. It is not yet known whether Mr Podesta’s emails were hacked by the Russians, but US officials say the attack fits the same pattern. Russian president Vladimir Putin has denied the allegation.

Clinton campaign manager Robby Mook told reporters on Thursday: “The Department of Homeland Security took the unprecedented step of saying . . . beyond any doubt that this hack and then the leaking of the emails was perpetrated by the Russian government for the purpose of intervening in the election and trying to affect the outcome in favor of Donald Trump. This is getting closer and closer to the Trump campaign itself.”

All of which raises the question: do Mr Assange, Mr Putin and Mr Trump form a triangle? Are they in communication with each other or merely exploiting a coincidence of interests?

Mr Trump has praised Mr Putin, and numerous links with Russia have emerged this year. But on Wednesday he denied any business interests beyond staging Miss Universe there. He has contradicted earlier statements about knowing Mr Putin.

Mr Assange was asked by Democracy Now earlier this year whether he prefers Clinton or Trump. “You’re asking me, do I prefer cholera or gonorrhea?” he replied.

Sarah Harrison, a WikiLeaks editor, has said it would publish documents damaging to Mr Trump if it had them. “It’s not that we’re choosing publications to pick a certain line,” she told Bloomberg.

But some observers argue that Mr Assange’s war on Mrs Clinton is personal: She was secretary of state at the time of the diplomatic cables leak. Her perceived secrecy and hawkish foreign policy represents the antithesis of his anti-US imperialist worldview. The capricious, nihilistic, non-ideological Mr Trump might seem like a kindred spirit by comparison.

Alina Polyakova, deputy director of the Eurasia Center at the Atlantic Council think tank in Washington, said: “My impression of Julian Assange is that he sees US hegemony in the international world order as the biggest problem facing us today.

“In his attempt to bring ‘transparency’, he ends up siding with the very regimes that deny transparency and human rights. That’s the irony of my enemy’s enemy is my friend.”

She added: “I think the Russian government is in fact using WikiLeaks: the connection seems pretty clear to me. Is the Trump campaign tied to WikiLeaks? That’s hard to say, but I would be surprised if there’s no coordination.”

Russia has uncomfortable associations for WikiLeaks. In 2010 its point man there, Israel Shamir, was exposed as an antisemite and Holocaust denier.

A website, israelshamir.com, carries numerous articles, one of which comments: “Ms Clinton decided to blame her spectacular lack of success on Putin, as well. If she were honest, she’d admit that she is unpopular, even among her own milieu.”

In an email, Mr Shamir denied Mr Assange is co-ordinating with Russia. “The problem is that incredible revelations of emails are totally suppressed by the Clintonesque media,” he wrote. “Instead of discussing Clinton’s hate to ordinary Americans, Clinton’s order to assassinate Assange etc, you discuss whether Russians are involved. Shame!”

Mr Assange remains holed up at the Ecuadorian embassy in London after claiming asylum, where he’s been for four years. Two women in Sweden have accused him of rape and other sexual offences, which he denies, citing a wider conspiracy.

Mr Assange has expressed fears that, if extradited to Sweden, he would be in danger of being sent to the United States, where he thinks he could face the death penalty.

A former associate of Mr Assange, who did not wish to be named, noted there will be presidential elections in Ecuador in 2017 and the current leader, Rafael Correa, has stated that he will stand aside after 10 years in office. This could make Mr Assange feel uncertain about his future protection.

“I believe he is basically hoping that Trump will be lenient on him,” the former associate said. “It’s about Julian Assange. I feel he’s just desperate and it’s a shame.”

The site has lost its halo in the eyes of what it used to be its core constituency, the ex-colleague added. “All the lefties were WikiLeaks softies. Now they are getting a different perspective. It’s obvious Julian Assange has lost his ability to be neutral.”

But others who know Mr Assange defend him.

Vaughan Smith, a journalist and former army officer who allowed the WikiLeaks founder to stay at his UK home for more than a year, said in a text message: “I don’t believe for a minute that Julian is liaising with Moscow.

“His whole thing is that he’s not supposed to know the identity of his sources, who leave material anonymously to protect themselves. He checks that it’s genuine and puts out as much of it as he can. That’s his compact with whistleblowers. As for Clinton and Trump? He hasn’t expressed a preference to me.”

And some Democratic voters have declined to criticise the leaks, which appear to show how the Clinton campaign worked to defeat Bernie Sanders in the primary elections.

Dave Handy, a political organiser and Sanders supporter who will now vote for Clinton, said: “I wouldn’t say I’m glad but they’re doing a necessary thing.