‘We’re lucky to be French,’ say journalists freed in Syria

Questions over whether France paid ransom for return of four hostages 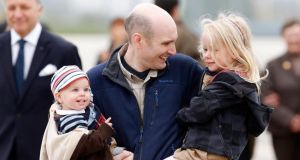 Joy was written on the faces of Nicolas Hénin (37), his wife Isabel and their small children, Sophie and Émile, as the young family locked in an embrace at the foot of the helicopter that had ferried four newly-freed French hostages from an air force base to Villacoublay, outside Paris, yesterday morning.

Didier François (53), the eldest of the hostages, said it was a joy merely to see the sky and to walk freely, after being imprisoned underground by Islamist rebels in Syria for 10 months.

The youngest hostage, photographer Edouard Elias (23), couldn’t wait to return to work. “Isn’t there somebody here who can lend me a camera?” he joked.

President François Hollande and foreign minister Laurent Fabius hugged the freed captives. For a few moments, the French media and political class seemed like one big, happy family. “This is a day of great joy for them, for their families, for their friends and for France, ” Hollande said. France was “proud to have such worthy compatriots who serve the freedom of the press”.

In secular France, Hénin’s father Pierre-Yves, a university professor, was the only person who remarked on the symbolism of Easter Sunday. Their liberation resembled a resurrection. Interrupted lives could resume now.

Florence Aubenas, the reporter held hostage in Baghdad in the mid-2000s, said readjustment is different for every liberated hostage. Aubenas was unscathed by her captivity and continued to cover wars. Jean-Paul Kauffmann, who was held for three years in Lebanon in the 1980s, was permanently scarred by the experience.


Experienced
François and Hénin are experienced journalists who had covered numerous conflicts. François was the first to report the use of chemical weapons by Bashar al-Assad’s regime. Hénin was the first journalist to enter Syria from Turkey when the revolt started. He was kidnapped on his fifth trip to report the civil war.

François and Elias were kidnapped at a checkpoint north of Aleppo on June 6th, 2013. Hénin and photographer Pierre Torrès were taken hostage when they filmed rebels playing football in the northern town of Rakka on June 22nd. All were held by the group known as the Islamic State of Iraq and Syria.

Close to 1,000 Europeans, most but not all of Arab origin, are fighting with the Syrian rebels. Fabius confirmed some of their jailers spoke to the hostages in French.

The hostages were moved about 10 times, sometimes alone, sometimes together. On Friday night they were given an unusually good meal, with an unprecedented offer of second helpings. Their jailers did not leave them time to finish. They were marched to the no-man’s land on the Syria-Turkey borders, where they were found early on Saturday by Turkish soldiers, who mistook them for smugglers and delivered them to police.


Patriarch
With his long, white beard, François, a foreign correspondent for Europe 1 radio station, looked like the patriarch of the group. The hostages shaved and cleaned up before boarding a French military aircraft at Gaziantep late on Saturday.

François was the first to speak, after Hollande, when they landed yesterday. “Our families suffered much more than us,” he said.

Hénin is extremely active and energetic, and his friends had worried he would go stir crazy in captivity.

He told France 24, one of several French media organisations that employ him, that he tried to escape but was recaptured.

Hénin said he’d lived through “many moments of interior solitude”. Asked what he will do with his new-found freedom, he laughed and said: “I want to be with my family. I realised during those 10 months that I didn’t see my children enough before, and that’s going to be the priority for me.”


Ransoms
François twice said how lucky the hostages were to be French. Unlike the US and Britain, France never abandons its hostages. In an interview with Europe 1 yesterday, Hollande reiterated: “The state does not pay ransom”. Yet in his speech at Villacoublay, he said: “France is proud of having obtained [the hostages’] freedom.”

Le Parisien newspaper said money was “very certainly” handed over. The French intelligence agency DGSE negotiated the release. Qatar and the United Arab Emirates, who are close to both France and the Syrian rebels, are believed to have mediated. The gulf sheikdoms may have paid on France’s behalf. In the event, no one reproached Hollande for breaking his promise not to buy hostages.

Reporters Without Borders says Syria is the most dangerous country in the world for journalists. Nine foreign journalists and more than 20 Syrian media workers are still being held hostage there.