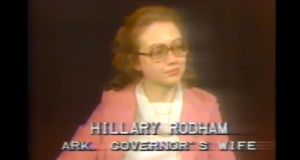 Hillary Clinton’s 1979 interview: the then first lady of Arkansas shared her views on the benefits of being young in elected office, privacy in public life and the strains on “a political marriage”.

A 36-year-old television interview with Hillary Rodham, then first lady of Arkansas, has been unearthed in which the future presidential candidate shares her views on the benefits of being young in elected office, privacy in public life and the strains on “a political marriage”.

The lawyer, then 32 years old, gave the interview in 1979 after assuming the role of first lady following the election of her husband Bill Clinton as governor of the southern American state.

The 27-minute interview offers a revealing insight into the thoughts and political views of a younger Hillary Clinton, whose campaign for a second presidential bid in 2016 is in full swing.

Confident, articulate and speaking with a soft southern drawl, Ms Rodham talks about juggling life as a public figure to a high-profile husband and her work as an attorney. A copy of the interview was posted online by the US news website Buzzfeed on Tuesday.

In the interview, she expressed concern that with “mass communications and ready-accessibility by the media” it will not allow her and her husband to leave a private family life. She discusses the “tremendous strain” the spouses of politicians feel.

She describes her relationship with Bill Clinton as an “excellent marriage”, though acknowledges that “being in the public eye, being separated from others” might not suit other couples.

Asked about being one of the youngest first ladies of a state, Ms Rodham said that her youth and her husband’s youth had not been a problem dealing with veteran politicians in Arkansas.

“In many ways, it has been a blessing because the amount of work that’s required is demanding on one’s stamina and one’s enthusiasm, both of which Bill and I are lucky to have,” said Ms Rodham.

At 67 now, Mrs Clinton would, if elected, be the second oldest president after Ronald Reagan, leading some to question whether she is suitable to deal with the stresses of the highest political office.

Some of the political issues that she speaks about in the interview, such as gender equality and spreading economic prosperity among all people, remain relevant to her political campaign today.

In his 1978 campaign, her husband, she said, talked about having “a well-balanced kind of growth that reaches all sectors of the economy, all regions of our state and all kinds of people”.

She explained her decision not to take her husband’s name because she didn’t want to mix her “professional activities with his political activities” and didn’t want to anyone to think she was “taking advantage of his position in any way or in some way riding on it”.

Discussing a perception that she might be “too liberal”, she explains that “some people may think I’m too conservative, too this or too that” and challenges people not to prejudge her or her husband based on an image they might have of the couple.

“I can only hope that whatever image that people might have of either me or Bill they will hold in abeyance until they have an opportunity to meet with us or talk with us,” she said.