Washington Redskins circle the wagons on campaign to change name

Football team’s owner is adamant he will not change name 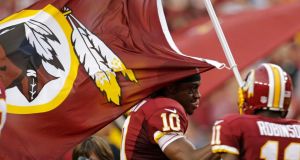 The radio ads started last Sunday to coincide with the team’s first game of the NFL season, the American football league, the following night.

“That word, Redskins, is not a harmless term,” says Ray Halbritter, a Native American representative in the ad. “We do not deserve to be called Redskins. We deserve to be treated as what we are: Americans.”

Campaign
The ads, funded by the Oneida Indian Nation, a Native American tribe in New York, was first broadcast in the Washington DC area ahead of the game between the Washington Redskins and the Philadelphia Eagles, renewing a prominent campaign that started earlier this year to change the name of the US capital’s local team.

The online magazine Slate attracted much attention last month when it announced that the website will no longer use the name “Redskins” to refer to the team but would instead start describing them as “the Washington NFL team.” Two other publishers, the New Republic and Mother Jones, followed the magazine in rejecting the use of the name, a moniker that Native Americans regard as derogatory. To some Native Americans, the “R-word” is the equivalent of using the “N-word” to describe African-Americans.

Sports writer Peter King added his support to the campaign last weekend when he said he would not use the team name in his columns anymore.

Other more mainstream media outlets – the New York Times and the news wire Associated Press – have said that they are sticking with the name “Redskins” in their reports.

The Washington Post started a campaign earlier this year by calling in a number of columns for the team to be renamed. “Native Americans are not mascots or historical bygones to be imitated,” the newspaper’s ombudsman at the time, Patrick Pexton, said in response to complaints that the paper’s campaign was being politically too correct.

In May nine Democrats and one Republicans in Congress wrote to Redskins owner Dan Snyder and the NFL commissioner Roger Goodell pushing for a name change.

‘Unifying force’
The high-profile campaign has had little effect. Goodell responded to the politicians, calling the team name “a unifying force that stands for strength, courage, pride and respect”.

Snyder, a pugnacious defender of his franchise, has categorically ruled out changing the name. Referring to how Redskins fans understand the “great tradition” behind the name, he told USA Today in May: “We’ll never change the name. It’s that simple. NEVER – you can use caps.”

In the new ad campaign Halbritter, a representative of the Oneida Nation, used comments made by Goodell when he criticised a Philadelphia Eagles player for using a racial insult to describe African-Americans.

Goodell said the remark was “obviously wrong, insensitive and unacceptable”. In last weekend’s ad, Halbritter said the “commissioner has the opportunity to stand up to bigotry again”.

Fans seem pretty wedded to the name, though, more out of tradition and also because the name was never intended to be offensive.

Unusually, the poll found that 56 per cent of people who want to keep the name said the word “redskin” was inappropriate.

Campaigners point to whether the term would be used in a personal context. Amanda Blackhorse, a Navajo and a plaintiff in a federal lawsuit attempting to strip the federal trademark rights to Snyder’s team, has questioned whether the owner would “dare call me a redskin, right here, to my face”.

Negative associations
The origins of the term “redskin” back to the Native Americans themselves, in negotiations in 1769 between the Piankashaws tribe and white settlers, according to research by US radio station NPR.

The station found that the name started attracting negative associations in the late 19th century in writings about the famous and bloody battles between Native American tribes and US army forces.

Sports teams have undergone name changes in the past where they carry negative connotations. The Washington Bullets basketball team was renamed the Washington Wizards in 1995 because the team’s owner, the late Abe Pollin, wanted to “express his abhorrence of gun violence” in the city.

The Notre Dame “Fighting Irish” football team logo of a stereotypical Irishman, dressed as a leprechaun with fists raised, is hardly flattering of the Irish and clearly plays to a cultural caricature. But this is more cartoonish in nature and carries far less of the historical baggage that angers Native Americans so much in a country still struggling with racial equality.

In the lucrative world of established American sports franchises and devoted long-standing fans, change will be difficult.